Paris-Nice: The Race to the Fun!

Yes, you're all basically familiar with Paris-Nice, considered by some to be the proper start to the cycling season and by others the first stage race to really care about. And people do tend to care about it, quite a bit. So let's dispense with the rote previewyness, toss around a few stage details, and otherwise talk about why this will be a lovely week... one team at a time.

Share All sharing options for: Paris-Nice: The Race to the Fun! 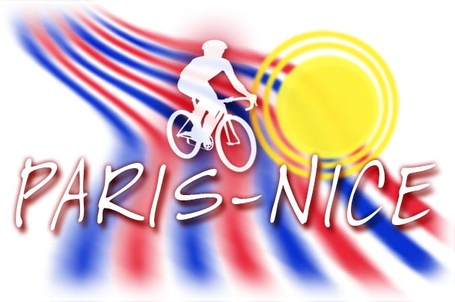 I'd say above all else, the most important thing to know about Paris-Nice is that it competes with Tirreno-Adriatico for everyone's attention. If you're in the top tier of the sport, you're at one of these races. Nobody can be at both, of course, and with the Race of the Two Seas putting on a nice show, Paris-Nice has been hard-pressed to maintain its prominence as the place to hone your form on the eve of the Classics. Still, as long as it's connected by blood to the Tour de France, it will have its place. And for those all-round GC guys, if you're actually trying to win one of these things, Paris-Nice still ranks a tad higher.

OK, let's quickly look at what's on the menu:

I like this course. It gives plenty of people something to do, doesn't hang a massive mountain stage over their heads, and generally includes a nice balance of stages. Nobody in attendance will feel bored... I hope. OK, with that, let's check out the teams and try to hone in on their to-do list at the race.

Ambitions: Stage wins. Peraud was third on the Col d'Eze last year. Given that it's a time trial, I guess he doesn't have to keep that under his hat.

Tirreno'd? Not really. Being half-Italian means you just send that half home for the week.

Ambitions: Hm, Fuglsang was less than 20 seconds off the win in Andalucia, with a decent time trial to boot. He's a GC dark horse. Otherwise, stages. Given the lack of sprinters, Borut Bozic might go points-hunting.

Tirreno'd? Pretty much. Sep, Lars, Bauke and Tom Jelte are all in Italy.

Ambitions: Good question! Stages for Renshaw and maybe the climbers, while Gesink could put in a nice run at the GC. It's been a while since Gesink had a normal winter, but he was fourth on GC here back in 2008 when he was barely old enough to drive, and is only now returning. With some decent form and perhaps a slight chip on his shoulder, not to mention the incentive of not having a sponsor beyond October. Blanco have been very strong in this potential transition year. Which reminds me of the famous line from A Good Man is Hard to Find: "She would have been a good woman, if it had been somebody there to shoot her every minute of her life."

Tirreno'd? Not really. They can maintain a two-front war with riders to spare.

Ambitions: Tejay's after the win, I'm pretty sure. He certainly should be, after coming second in Argentina, and given the course profile that's very much up his alley. Gilbert should be free to chase stages and otherwise get himself primed for the Classics. I'll be interested to see what sort of strategy they have around van Garderen. Nerz rode a solid Tour, so he could be a very nice addition to the GC squad.

Ambitions: Stages. Viviani will have something to prove. Maybe they can work on leadout organization, a favorite pastime in late winter.

Tirreno'd? Mais non! Actually, they're pro-conti and aren't doing Tirreno at all.

Ambitions: GC places. Taaramae has two top-seven finishes here and second on a stage last year, after a tough start left him out of the overall contention. Coppel also does well here, fifth on Col d'Eze last year and definite top-ten material. Navarro is on form with a win in Murcia last weekend. Presumably he goes stage hunting if the other two drop off, or plays super-domestique if they're sniffing the podium.

Tirreno'd? Nope. This is closer to home turf. Samu is going abroad, but that's his job anyway.

Tirreno'd? Sacre bleu! Of course not. Although maybe. Pinot is abroad.

Ambitions: Jeannesson's GC place, after a strong ride on the queen stage to Mende last year en route to sixth overall. Bouhanni will handle the sprints.

Tirreno'd? I'd say so. Only Farrar, Martin and Dekker are listed there so far, but presumably Hesjedal will be in Italy too. He's not in France, so there's that.

Ambitions: Stages. Well, maybe Talansky can hang around and climb the leaderboard on the final stage, but he's not done much this year. Might be a tad early for him.

Ambitions: Stages. Haussler could be in on one of the transitional days, maybe that little uphill tilt in stage 2. Lofkvist hasn't done this race since 2007. The crazy part is, he's still only 28. Also, he appears to have some early form, after winning the Tour Med. Could get interesting. Lord knows he could use a super-strong start to the season.

Tirreno'd? You mean, is J-Rod in Italy? Then yes.

Ambitions: Spilak's GC, and stage sprints for Kristoff. Spilak was a strong fourth here last year, and rode well in Andalucia two weeks ago. He's gone after the GC two years straight, so that's not likely to change.

Tirreno'd? Is water wet? Is the sky blue? Are their jerseys too pink?

Ambitions: I suppose Petacchi can try to work on leadout organization.

Tirreno'd? Well, the Gorilla is over there. So yeah.

Ambitions: I'm trying to imagine a way in which they make an impression on this race.... Hm... nope.

Ambitions: OK, Quintana will probably be kept under glass for a few more weeks. Costa, on the other hand, could very much contest the overall win, with his mix of skills and decent form. It's his debut in the race, so I'll contain my enthusiasm for now, but if he gets comfortable over the course of the week, the Portuguese star-in-the-making could have a nice scalp here.

Tirreno'd? No, they sent all the shiny objects to Italy so the Belgians could HTFU for spring. [Chavanel is an honorary Belgian at this point.]

Ambitions: Chava's GC place, plus stages, or maybe just fitness. Boonen has a laser-like focus on his goals by now, with his margin for error gone. Chava should like this year's mellower course even better than last year's.

Tirreno'd? Debatable. I'll go with no. Goss is there, but that's it for the stars.

Ambitions: Stages. Not sure why, but Gerro hasn't done anything at this race. Too cold?

Tirreno'd? In terms of star power, yeah. Andy and Fab are over there.

Tirreno'd? Did you read the previous line?

Tirreno'd? Nope. Not even a little.

Ambitions: Stages. Hivert has been awesome all winter. Simon is their star, but I wouldn't expect to actually see him much.

Tirreno'd? Only if you think Degenkolb outranks Kittel, which I don't.

Ambitions: Stages, leadouts, and what the hell, the maillot vert.

Ambitions: Get noticed on camera at some point.

Tirreno'd? Totally. Remember when Bert used to own this place?

Ambitions: Stages. Roche could creep into the top ten or so if he's feeling it.

Ambitions: Well, Westra is undoubtedly a few people's pick to win, coming second last year by eight seconds to a guy who isn't around this time. Westra is sitting on decent form for wintertime, as well. De Gendt won a great solo stage here last year, and that sort of opportunity will be there again.