Saturday brings the spring classics season to Italy for the seventh running of the Strade Bianche race in Tuscany. An instant favorite with fans because of its idyllic scenery and unique challenge, it holds a special importance to me.

Share All sharing options for: Strade Bianche Preview: A Dusty Loop Towards Siena

Have you ever ridden in the dirt? No, not on your mountain bike, for there is too much of an illusion of traction there - I mean, have you ever taken your road bike off the pavent, through the gravel and dust over packed earthen roads in the middle of nowhere? Have you felt the way wheels undulate over gravel, tires slip and grasp on loose uphills, a bike slides imperceptibly sideways before catching and repeating over and over as you carve a corner? Have you had a car pass you on a dusty road and felt particles of earth line your nose and throat and make your eyes water?

I have. Dirt roads are what I seek out on long rides, what I map routes around, what keeps boredom at bay at hour five of a long day when the weather is shit but you really ought to still be training for that ride or race you can't stop thinking about. I love them unabashedly. My best ride in recent memory occurred when I was traveling and pulled off on an exit in the middle of nowhere to ride. I knew only that there were hills and no town nearby and stumbled across dirt roads climbing and twisting around the hills, one with a creek crossing, all peppered with gravel just thin enough to ride and just thick enough to keep my attention from zeroing in too sharply on the house to my left or fenced off pasture on the right.

Perhaps it is the rustic nature of these roads that I love most. They are a trip backwards in time, before there was tar and asphalt laying smooth strips up mountains and across plains. On a bike, they become even more - a herald back to the days of black and white photographs and climbing the Galibier when it was hardly more than a goat track. When Giro stages traverse over the Col du Finestre, we see not only a battle of man against man but also man against nature. It is Paris - Roubaix, tamed down to where humans can win.

If you have borne with me thus far, you may understand why I love Strade Bianche so dearly. The terrain provides a thrilling race and the scenery is idyllic, but beneath the surface is a layer of nuance and unpredictability that makes the action on that much more entrancing.

It is hard to believe this race is not a Monument, even though it the first edition of the race was held in 2007. The course winds through vineyards and olive farms in the Tuscany region of Italy for 190 kilometers and takes in eight sections of sterrati, or unsealed roads, on its journey to the Piazza del Campo in the heart of Sienna. The white roads, as they are affectionately known, provide stunning views, especially when a dust plume hundreds of meters wide billows out behind the peleton. The hills are steep and plentiful, pitching well into the double digits. Look, if you will, at the profile for the race as a whole and the final kilometers (the grey marks the dirt). No climb is especially notable, but they come back to back and are steep enough to dig deep into riders' power reserves.

That does not mean no rise is not memorable, though. The second to last section of strade bianche is almost entirely uphill, though it switches between climbing and flat a number of time. The final section plunges, including a few blind downhill corners on gravel, before cruelly rising upwards. Last year, Greg Van Avermaet made what looked to be a race deciding move at the base of this final climb, instantly prying open a ten bike length gap. Forty seconds later he was powerless as Fabian Cancellara steamrolled his way past, leaving Van Avermaet, Maxim Iglinsky, and the remainder of the chase group floundering in his wake. If a move goes here, there is a good chance it will stick for the roads are rolling and twisty to and through the outskirts of Sienna.

But inside Sienna, there lurks a beast in the final kilometer of the race. The road narrows and funnels between old stone buildings as the gradient ticks upwards to 16% on smooth cobbles. At the top of the climb, after it flattens out a bit, there is a right hand bend and the race is often to this turn for whomever takes the perfect line through its apex will shut out an opponent and have enough of a lead to survive the final slightly downhill 100 meters until the finish in the middle of the plaza. This is where memories of the race are forged, in the hard fought battles to stay in contact on the final climb and perfectly time a jump for the final corner. If you are in need of a refresher, 2011 witnessed a good battle on the final climb. 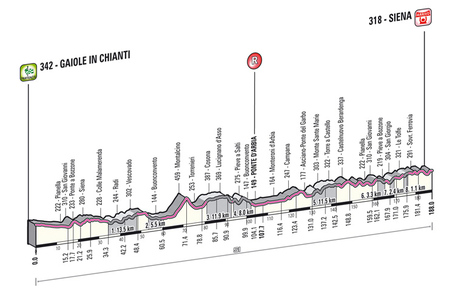 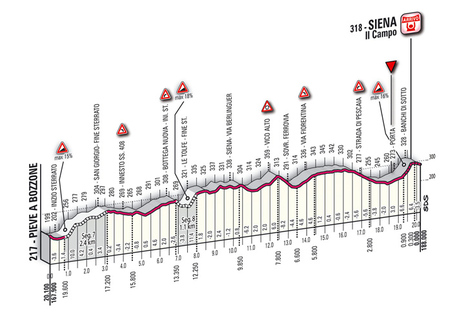 The list of winners lends also Strade Bianche an instant air of credibility, for what inconsequential race would have Alexandr Kolobnev, Fabian Cancellara, Thomas Lövkvist, Maxim Iglinsky, and Philippe Gilbert as its only winners? The course automatically selects out the best, offering us a preview of the weekends in Belgium a fortnight or more away. The race is not on the World Tour calendar, allowing RCS Sport to invite more homegrown Italian teams. The classics teams will, by and large, be here though with Omega Pharma - Quickstep the only major abstaining team. The 17 teams invited this year are Radioshack-Leopard, Ag2r La Mondiale, Androni - Giocattoli, Astana, Bardiani Valvore - CSF Inox, Blanco, BMC Racing, Cannondale, Crelan - Euphony, Garmin - Sharp, IAM Cycling, Katusha, Lampre - Merida, Movistar, Argos - Shimano, Vacansoleil - DCM, and Vini Fantini - Selle Italia. Vanmarke, Cancellara, Boom, Phinney, Van Avermaet, Sagan, and Nuyens only begin the list of big names that will be in attendance and should be enough to guarantee an interesting show.

In 2010, the Giro d'Italia took on these famous roads on the now infamous Stage 7 to Montalcino. That year, there were no clouds of dust billowing behind riders but instead the rains fell all day, sowing streams that ran down and across the road and turned the familiar dust to slime atop the road. Ivan Basso and Vincenzo Nibali fell that day, losing time. Cadel Evans and Alexander Vinokourov battled through the final dirt section, squinting and blinking in vain attempts to keep mud out of their eyes. That stage is consistently voted one of the best days of racing in recent memory, though the same rains have improbably failed to visit the race in March thus far. This year appears no different with predictions of overcast skies and cool temperatures but no chance of rain for Saturday. Maybe we will be graced with a wet Strade Bianche in the future and a race as unforgettable as the 2002 Paris Roubaix, but Saturday's race will not need inclement weather to make it a memorable one.