Nibali grabs the lead in Tirreno-Adriatico

After a superb day of racing in some atrocious conditions Vincenzo Nibali took the lead and is now the man to beat in the final timetrial . Peter Sagan outclimbed some of the greats to join the decisive attack and won the stage in convincing style. All in all a day that will probably go down as one of the top races as we sum up 2013.

Share All sharing options for: Nibali grabs the lead in Tirreno-Adriatico

Once again we were shown today how the best of bikeracing doesn't come on the most hyped days with the iconic megaclimbs. The Tirreno organizers had come up with an evil medium stage stacked with short steep climbs throughout the day. One of them, a nasty little Muro with percentages of up to 30% also served as the springboard in the finale of the stage. To top it off Neptune or whatever local deity handles the weather decided to spice things up with nasty rainy conditions to really try the resolve of the riders.

The early action including a big breakaway with some heavy hitters. Cancellara, Cunego, Intxausti , Boom, Nocentini and Visconti were all out there in what looked like a threatening bunch. A guy like Cunego there probably jinxed them a little as he was too close to the lead for the group to be given too long reigns. As the stage went on and the weather turned from bad to worse abandons became the story of the day and they happened in droves. Most notable was yet another DNF from troubled Andy Schleck and the departure of some of the bigger classics names. Cavendish was one of the riders who probably elected not to jeopardize his Milano-Sanremo on a day like today. With him went teammates Terpstra and van Keirsbulck as well as much of the Astana team.

As the race hit the climbs in Sant'Elpidio for the last time Tom Dumoulin and Benat Intxausti were the last remnants of the break still out there. Vincenzo Nibali then used the last ramps and the early descent to launch a fierce attack on his GC competitors. Contador looked ragged on the wall and Froome was nowhere to be seen as Nibali shot off in his inimitable style on the wet descent. Intxausti was soon passed as he pressed on, leaving a lead group in bits and pieces behind him. First to join him was former teammate Peter Sagan who has looked well protected by his Cannondale team leading into the Muro. The duo looked to be building a gap to the chase groups behind. Contador had no answer but Joaquim Rodriguez closed the gap to the front bit by bit and finally made the lead group a trio.

At this point the situation became more clear, Froome was in a group behind with about a 50 second gap and with everyone on the road quite clearly giving everything they still had left in the tank, that gap never looked to be closing. Quite notably as well, the earlier team dominance of Sky was nowhere to be seen, Froome looked to have one teammate with him but it was up to himself to defend his race lead. In the end his group managed to close on the group in front with Horner and Contador but the gap to the leading trio was never closing. 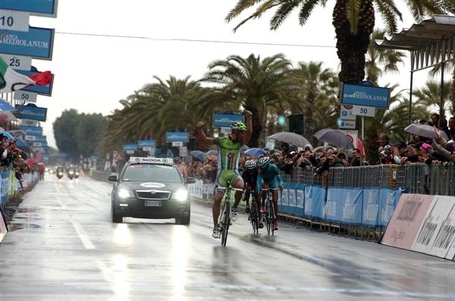 Nibali and Rodriguez both drove the group all the way to the finishline to maintain their GC advantage as Sagan was a already certain stage-winner from the moment he caught up with Nibali. That outcome was never in doubt and the other two didn't much look like they cared. So Sagan grabbed the stage proving himself the, by far, most versatile rider in the world today as Nibali worked himself into a 34 second lead over Chris Froome going into the final TT tomorrow. Rodriguez now sits in third 3 sends behind Froome.

With the deciding TT only being 9.2 km Chris Froome will find it a hard task to turn this around once again. To compare, Nibali only lost 20 seconds to the winner Cancellara in last years final TT on the same course. Nothing can be taken for granted though as today showed. What looked like a well controlled race for Sky overnight is suddenly anything but. Question is also how todays brutal stage will affect the riders tomorrow? Quite possibly the battle for the Trident will be won and lost in hotel-beds and on the massage-tables tonight.