Let winter finally retreat to Siberia whence it came. Let us have spring and spring classics. From here on we have three weeks of beautiful cobbled racing. The best time of the year with wind, mud, dreary flemish villages, painfaces, frites, massive crowds, doodsmaks, echelons, Sporza and much much more. Here at the cafe we celebrate these weeks the way they were meant to be celebrated and the fun starts here.

Perhaps it is with a bit of nervous anticipation we look forward to the next week. I've been casting nervous glances at the weather reports for Flanders every few hours these last days. And while I can't really say watching the Italians welcoming La Primavera with a snow-shortened race and iced over helmets instilled a lot of confidence in me, at least the reports point in the right direction. Yes we will have continued cold but at least temps seem to be moving in the right direction and there is no mention of more snow at the moment. So with any luck we will get the hard races we are looking for without it going to such lengths that we have to worry about more cancelled races. Just a quick reminder to the weather gods please: "nasty" we like, "cancelled" we don't like. Looking back, I'm thinking this is probably our punishment for cursing at the warm and sunny weather that "plagued" many of the classics last year. Let's assume we have seen the last of the crazy weather though and look at what we have in front of us:

Wednesday March 20 - Dwars door Vlaanderen
This is the first of the Flanders Classics events. A beautiful preface to the bigger things that lie ahead. It has the same kind of challenging course as E3 and the Tour of Flanders but it's slightly lower in status and doesn't quite have the same depth of field. It has more of the local Pro Conti teams and it is often the chance for the "second in command"-riders to have a chance to shine. Last years winner Niki Terpstra certainly falls in that categoryand there is a certain beauty i seeing guys like that finally have years of hard work pay off. On a good day Dwars often provides the most open and offensive riding. My favorite race by far next to De Ronde because of the unpredictability of it. It's one of those races that can be decided at any random hill or turn of the road and the smallest gaps can turn out to be un-closable just as people can lose minutes moments after they looked unbeatable on the road to victory.

Friday March 22 - E3 Harelbeke
The big Ronde tune-up race. The one where almost all the contenders bring their A-game to measure their form for the monuments ahead (except for the really advanced sandbaggers, the giants of the genre). The lone outsider against the fold of Flanders Classics looks like it came out on top in the powerstruggle that occurred when FC moved their races around (moving Gent Wevelgem). E3 is now a World Tour race and thereby the riders aren't forced to focus on the less popular G-W . Probably the best race last year despite that the race ended in a groupsprint predictably won by five(!) time winner Tom Boonen.

Sunday March 24 - Gent - Wevelgem
Previously the sprinters prize, wedged in between RvV and Roubaix, the race has seen the biggest changes in the last years. Now moved to the Sunday before RvV and given a longer, more demanding course it now has more potential for greatness. Just as with the opening weekend, we now have a Sunday race for the heavier sprinter types whereas the climbier specialists often focus on the earlier race, in this case Friday's E3. The deeper teams can swap out key rider and have an optimal team for both. We have yet to see a really massive, grueling race on the new longer course but we'll get one sooner or later. Until we do it will always feel like the ugly-cousin race to me but I would love to be proven wrong.

Tuesday March 26 - Thursday March 28 - Driedaagse De Panne - Koksijde
Nothing beats a little holiday on the coast. Sun, sand and..... oh right, this isn't that. Driedaagse is the windy crashfest that only the insane, the "desperate to be supremely fit for De Ronde" and the biggest sandbaggers west of the Schelde attend. It's also the race that can tell us everything and nothing at all about what the weekend will bring. Three days, four stages , with people DNFing left and right as they feel they have gotten enough training (or enough broken bones and dreams). The craziness is only highlighted by the fact that this feels like the one remaining Flanders race that Stijn Devolder still has an actual chance of winning. 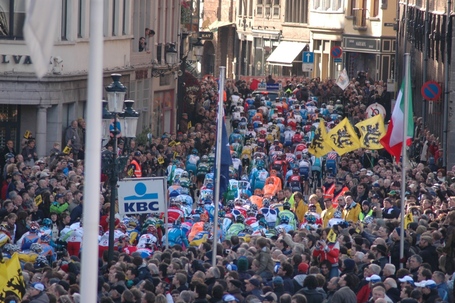 Sunday March 31 - Ronde van Vlaanderen
If the significance of this day isn't already apparent to you I don't know what to say. The Tour of Flanders is pretty much unrivaled in the expectations and enthusiasm it inspires. Sure a Tour-stage can be even more crazy with media, tourists and spectacle but this Sunday is practically a national holiday and something that you get the feeling concerns almost every man women and child in Flanders. The race is important to everyone and they celebrate their heroes on the road, be they Tom Boonen or seventh domestique on one of the small Belgian Pro Conti teams. Being there in the days before and standing roadside to witness it is like no other sporting experience. The rise of excitement in the crowd as the race draws nearer, the jolt of energy as the sound of the approaching helicopters alerts everyone to what is about to happen. And then, the mad crescendo as the race passes by...... it doesn't get any better than that. Except from a sporting sense, then it's even better to watch it at home where you can follow every move in the race and see the strategy play out minute by minute.

Wednesday April 3 - Scheldeprijs
Mentioning Scheldeprijs in this company is a bit of heresy because it is clearly the red-headed stepchild of the lot. It's not a race for the big champions although these days it will not be won by anyone but one of the absolute top sprinters. But let's face it, the sprintfest in Antwerp is mostly there to keep us sane between the Ronde-party and the madness that is Roubaix.

Sunday April 7 - Paris-Roubaix
Third monument of the year and the craziest and probably most popular of them all. By now teams and riders are all coming to the start with a history. Either of victory and self confidence or of failure, defeat and desire for revenge. A win on the deformed cobbles of northern France can both crown a triumphant campaign and save a season that looked lost. Where the Tour of Flanders is beauty, strategy and subtlety, Roubaix is a show of brute strength and commitment. It's the perfect finale to the cobbles weeks as you can see the riders emptying their tanks of every last bit of energy on the final sectors of pavé before the velodrome. The sense you get watching their faces is that they couldn't manage a single more kilometer of racing if they had to to save their lives. That goes for the winner as well as the late finishers who keep cranking the pedals to reach the velodrome before the timecut. Because just finishing this brute of a race rates so highly in these guys minds no one will concede defeat until it is absolutely unavoidable.

So that's the menu. It's a pretty set one and it doesn't vary much from year to year. The races are the same, the spectacle is the same, you can set your clock to the headless attacks of Juan van der Flecha and so on. And yet there are the subtle nuances that make these races endlessly fascinating every year. The riders change from year to year of course, as does the balance of power between the teams, and the changes in weather can turn an idyllic race one year into a torturous nightmare the next. Often times we look at some riders as almost invincible only to see them plagued with bad luck, punctures and crashes while others ride inexplicable waves of fortune to result after result. There is no way of explaining these things and when we debate them, and we will debate them, there is seldom one definitive answer to why things played out the way they did. In the already complex sport of cycling, these races are just a level above anything else. Anyone who claims to fully understand them is either a fool or employed as an analyst for Team Sky, most likely both.
In the end all you can do is embrace the randomness and endless intricacies and enjoy the show. 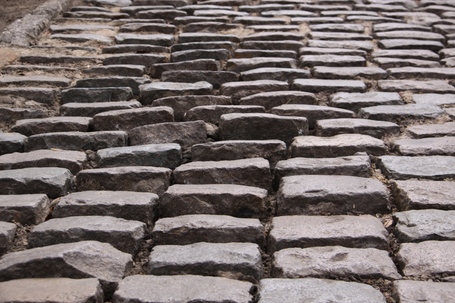