Some days are so deeply pressed into the history books that even when the ink fades and recent memory has passed, the indentations left in the page from the printing press are still legible and read generation after generation. In 1980, Bernard Hinault won Liège - Bastogne - Liège in a snowstorm, suffering so much that he could not move some of his fingers normally for weeks after the race. The second placed finisher, Hennie Kuiper, finished 9'54" in arrears and only a handful of riders finished. Today we witnessed another such day that will become revered as riders braved rain and snow and the impossible almost happened.

Indications that this race would not be a Primavera like the sunny trips down the Ligurian coastline whose stunning scenery we remember began the night before. Rain had been predicted for Sunday since early in the week, but temperatures were plummeting downwards. Mark Cavendish tweeted that he had not worried until Tom Boonen, hardman of the northern classics, came into his room fretting about what to wear in the "apocalyptic" weather that was now forecast. But cold and rain are not sufficient to elevate a race to legendary status, for day after day of miserable conditions occur over the season year after year.

Riders appeared at the start line bundled in jackets, neck gaiters, tights, booties, and thick gloves and there were rumors that the Passo Turchino, the gateway to the coastline, and its serpentine descent to coastal roads would be neutralized due to snowfall. As the peloton ambled towards Turchino with the breakaway now ten minutes up the road, snow swirled around riders and formed a layer of ice on their helmets, glasses and bikes. With snow accumulating on the roads and no suitable alternative routes, race organizers decided to take measures unheard of - stopping the race, putting riders in team busses, and transferring them 50 kilometers down the road to Cogoleto to re-start the race, giving the breakaway the same advantage it held when they reached the neutralization point at Ovada. 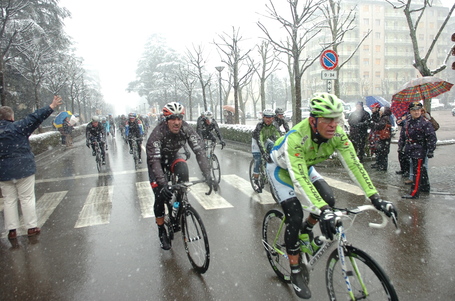 Riders were directed off the course and to their team buses in Ovada under heavy snow.

Riders struggled to regain warmth and, eventually, the gumption to step back out into the cold where snow was replaced by a cold, heavy rain - almost certainly more miserable than snow itself. Many refused - even Tom Boonen refused. Riders who restarted dropped off in droves as survival instincts overrode hopes of team or even personal glory. Vincenzo Nibali, who must have relished the thought of a wet descent of the Poggio that posed his greatest - and perhaps only - opportunity to win the race he cherishes, climbed off before the race hit the penultimate climb of the Cipressa after spending the better part of two hours appearing miserable at the back, trying anything to get his hands warmer.

In front of the peloton, Lars Bak blew warm air into his gloves, hoping for a momentary reprieve from the numbing cold. The breakaway was quickly being brought back into the fold as the chase behind became dictated not so much by tactical considerations and careful management of time gaps but by the need to pedal hard and generate body heat. The gap to the splintering breakaway quickly eroded to nothing before the Cipressa.

The climb of Le Manie was sidestepped, both for concerns about safety but also to avoid further delays to the race, which was running well behind schedule due to the hassles in re-starting the race. A number of sprinters remained in the peloton as the ever accelerating charge over the three Capi began. But despite their presence, which spells doom to any move which goes on the Cipressa in recent times, the unfathomable almost happened. With teams culled by the conditions, attacking riders sensed their chance and began hostilities on the early slopes of the Cipressa. This is where doomed moves go, where second tier riders play their hands knowing the only hope they stand is to pry open a gap early and hope the fickle mistress hope smiles favorably on them. She rarely does.

But this time, reigning world champion Philippe Gilbert, a calculating rider, if at times overly aggressive, attacked on the descent. With a mere 40 riders remaining in the peloton, perhaps this was the one time the Cipressa move would work. He was followed by Sylvain Chavanel and Ian Stannard with Peter Sagan and Fabian Cancellara close behind. The group swelled and re-formed as Stannard, Chavanel, and Eduard Vorgonov (Katusha) took off, leaving the others to drift back into the dwindling peloton. 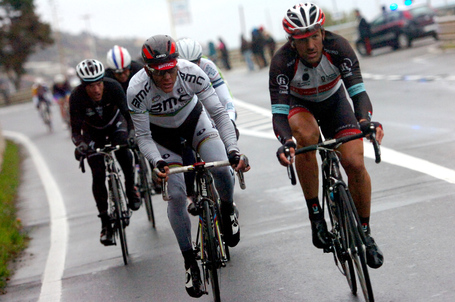 Near the bottom of the Cipressa descent the lead group, formed under the impetus of BMC's Philippe Gilbert, swelled.

The gap needed for an attack on the Cipressa to survive the ascent and descent of the Poggio is sizeable, but it appeared that it might stick just this one time as the time clock said 30 seconds between Chavanel and Stannard - now sans Vorgonov, who succumbed to gravity's inexorable pull on the early slopes of the climb - and the inseguitori. Maxim Iglinsky tried to bridge the gap and halved it, but then the chasers brought him back and the gap was halved. Up front, cooperation devolved to attacks, coming ever increasingly in slow motion as the day's efforts caught up to Chavanel and Stannard. But, despite the losing battle to hold onto that precious lead, atop the climb it seemed as if the duo would stay away. 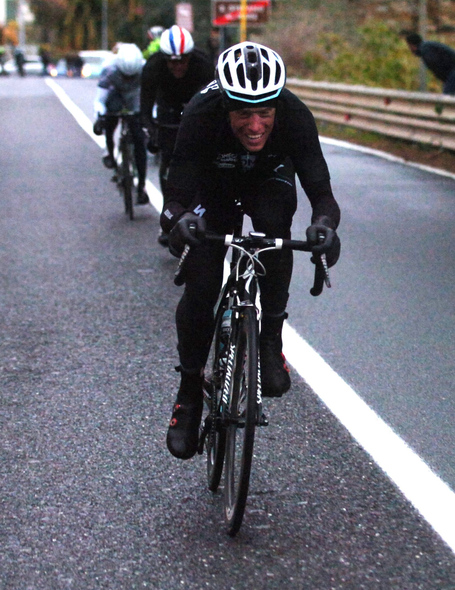 Chavanel attacks, bringing Stannard with him but losing the company of Vorgonov.

What many forget is that the descent off the Poggio is not purely about skill and daring but also about raw power. Each hairpin must be sprinted out of and many of the slopes do not drop so steeply that one cannot pedal and gain extra momentum. As Chavanel and Stannard crested the top, the gap to the chasers was 15 seconds, give or take. With Peter Sagan, both daredevil and genius in curves, leading the descent and Fabian Cancellara sitting in the chasers as well, the gap could be expected to tighten, but rather than in the corners it seemed that the two groups were coming together on every straightaway. Chavanel and Stannard were strong, they were skilled, but they were fatigued from a 20 kilometer voyage off the front and the attacks they had thrown back and forth. 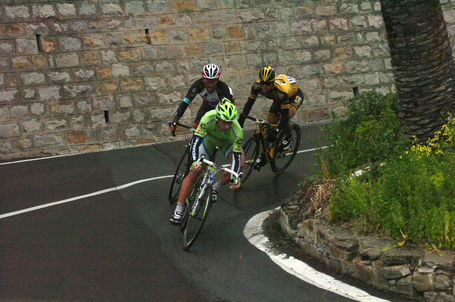 Sagan leads Cancellara and Ciolek through the top of the Poggio descent.

Before the descent was over, the groups had rejoined, and as the descent flattened out with three kilometers yet to race an event that would go unforseen until the final 800 meters occurred: Taylor Phinney of BMC jettisoned his companions in the second, larger, chase group and sought to close down the nearly twenty second gap to the six riders up the road.

Ahead of Phinney, the cat and mouse games began in earnest. Sagan was everybody's primary fear, and who can blame them? His finishing speed held off Mark Cavendish in Tirreno-Adriatico a week ago and he was bound to be one of the freshest riders. Ian Stannard displayed pluck by attacking as soon as the road flattened out. Behind, Sagan chased, almost without hesitation, knowing the burden fell to him. As Stannard was brought back into the fold, Sagan sensed a gap to his wheel and kept the pressure on, launching his own attack.

Sagan's move may have prompted surprise, but even more so it was sure to prompt a response and Fabian Cancellara chased him down. Stannard was the last to get on terms and desperately swung to the right side of the road and merely kept his speed, trying to surprise the others and gain a gap. It was a last ditch effort, a hopeless move that racers nonetheless are forced to by their instincts to race for the win. Had Stannard been dropped immediately after Peter Sagan once again chased him down, he would have finished no higher than he already did.

But amongst all the games in the group, everyone seemed to forget Gerald Ciolek, who has had a few sparse years but was once put in the number one sprinter spot at T-Mobile ahead of a certain Mark Cavendish. Atop the Poggio, he was on Fabian Cancellara's wheel when his inevitable attack went, yet he let a gap open up and forced Sagan to chase him down. On the flat roads leading to the finish, all eyes should have been on both him and Sagan to close gaps, yet Sagan was the only rider who was paid any bother. Ciolek simply sat, and waited, and the result could only be one thing once he was given these three passes. Sagan's matches were burnt, as were Cancellara's and the others, and there was nothing they could do once Ciolek patiently waited then jumped out of Sagan's draft to take the win. The margin was close, but Ciolek did no more work in the sprint than he had to, and the gap to the others would have only been larger had he opened up his own sprint earlier. Instead, he allowed Sagan to once again make opportunities for him.

Behind, Taylor Phinney crossed the line in exhaustion, almost just making contact with the group at 400 meters to go before the sprint opened up. Some 14 seconds later, the remainder of the peloton roared onto the finishing straight and Alexandre Kristoff beat Mark Cavendish in the sprint for eighth. Riders could barely speak as they were interviewed outside team buses.

Yesterday was a day that will be remembered for its atrocious weather, for the sight of grown men, hard men, crying on their bikes, the day when hard men finally showed weakness. But it would be a mistake to forget the racing itself. There was no climb of the Turchino, nor Le Manie - not a "proper" Primavera in the words of Fabian Cancellara but a monument nonetheless. But what I will remember, at least, is how the impossible moves on the Cipressa almost stuck, how the racing was far less formulaic than other years, how the certain victor swung from Chavanel to Sagan and finally to Ciolek. I will remember how the weather turned racing on its head, not the weather itself.