Does it suck, like last year? Well, it doesn't leave me dancing on the ceiling. But it has a little bit of everything - sprints, big mountains, rolling hills, a tough time trial, and of course views to die for.

Traditionally, Tour de France contenders pick either the Dauphiné or the TdS as the final big preparation race.

The Dauphiné won't officially announce its route until April 15th, but the early rumours seem to indicate that the Dauphiné will be far more mountainous than the Tour de Suisse.

All stage routes and profiles can be seen at the offical TdS site here. Available in German, French, or English (no Italian or Romansch??).

A. Tough mountain top finish at the ski station of Crans-Montana after climbing the second highest paved mountain pass in Switzerland: the fairly awesome Nufenen Pass @2473 metres (photo below). 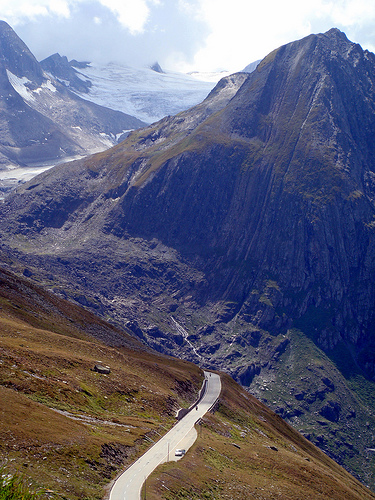 B. A downhill finish just after climbing the beautiful, and high (2315 metres) Albulapass. It's the same finish as stage 6 of the 2006 TdS: 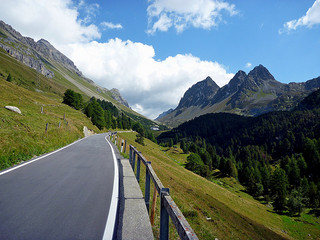 5. A very difficult final day Individual Time Trial. The last 10 kilometrs are uphill and quite steep. Much harder than the Eze Paris-Nice ITT, for example.

The biggest shock of the route? Strangely, contrary to Swiss law, the Route does NOT pass UCI headquarters in Aigle (although stage 3 starts just 15 kilometres away, in jazzy Montreux).

We'll do a more detailed preview just before the race, but until then, let's all enjoy the Tour de Suisse theme song: