Paris-Roubaix: The Inside Story

It's a little known fact but, in her youth, Joni Mitchell was a mad crazy cycling fan and her hit song, Big Yellow Taxi, is a love song to the sport. The title itself is a reference to the yellow Alcyon bikes Henri Desgrange for a time made competitors in the Tour de France compete on (some suggest it's actually a reference to the Mavic neutral support vehicles, but these didn't arrive until after the song was written). The line in the song that says they paved paradise and put up a parking lot, well that's a reference to the Queen of the Classics, Paris-Roubaix, and how the cobbles that gave the race its character were tarred over in attempts to drag the roads of the region into the modern era.

Share All sharing options for: Paris-Roubaix: The Inside Story 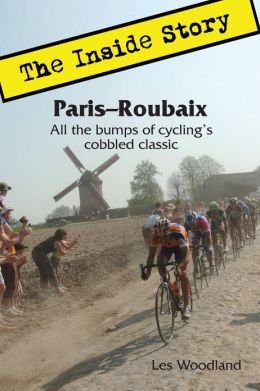 Title: Paris-Roubaix: The Inside Story - All the Bumps of Cycling's Cobbled Classic
Author: Les Woodland
Publisher: McGann Publishing
Year: 2013
Pages: 197
Order: McGann Publishing
What it is: A history of the Queen of the Classics.
Strengths: Packed full of anecdotes and incidental stories
Weaknesses: 197 pages and close to a hundred-twenty years of history.

Cycling is a sport whose history is a mix of truth, half-truth and downright lies. Often times this is one of the things I love most about the sport, that its history is truly fabulous. It is a history that is open to being revised, welcoming to revisionists, constantly being reinvented to sell the story anew to fresh audiences. Facts are just little nails round which stories get threaded and rethreaded until the nails become obscured and all that can be seen is the cloth the threads weave.

One such story is the way in which Paris-Roubaix acquired the first of its three alternative names: La Pascale. Legend has it that the first running of Paris-Roubaix, in 1896, fell on Easter Sunday and ever after the association with the Pascal feast has clung to the race like a second skin. This, like the Joni Mitchell story above, is arrant nonsense.

When Théo Vienne and Maurice Perez teamed up with the publishers of Le Vélo to organise the first edition of Paris-Roubaix the intention was that the race should act as a training race for Bordeaux-Paris. Vienne and Perez proposed running the race on May 3, three weeks ahead of Bordeaux-Paris. That, unfortunately conflicted with the date of municipal elections. So they looked to the week before, April 26. That, though, clashed with a horse-racing festival in Roubaix. A week earlier, April 19, was finally found to clash with nothing of any great import, and that is the date the first running of the race occurred on. Which happens to have been two weeks after Easter 1896, which fell on April 5.

The following year Paris-Roubaix held its date in the calendar - or close to it - and was run off on April 18. Easter, that great movable feast, followed the moon and was a fortnight later than the previous year: the Sunday of Paris-Roubaix. Thus was born the race's first association with La Pascale, the Pascal feast.

The Hell of the North

Like many races of ancient age, Paris-Roubaix's roll of honour bears witness to the toll of war. The winners of four editions of it died in the First World War: Octave Lapize (victor in 1909, 1910 and 1911) was killed in action close to Verdun in 1917 and François Faber (1913) in 1915. Charles Crupelandt, the winner of the 1912 and 1914 editions of the race, ended the war a disgraced hero. Awarded the Croix de Guerre in 1915 he was gaoled in 1917 - for trafficking in rationed goods, some say - and, upon his release, was refused a racing licence and thus debarred from picking up where he had left off before war interrupted his career.

Pick almost any race of the era and you could tell similar stories: Bordeaux-Paris, Paris-Tours, Liège-Bastogne-Liège, Paris-Brussels, Milan-Sanremo, and the Giro di Lombardia - as well as the Tour de France and the Giro d'Italia - all have rolls of honour scarred by the Great War. Paris-Roubaix stands unique, though, in that it celebrates its association with a war that decimated a generation. Its second alternative name, l'Enfer du Nord, the Hell of the North, forever recalls the toll inflicted on the lands through which it races.

In 1919, with the Armistice signed and representatives of the warring nations negotiating in Paris, L'Auto - under whose aegis the race had by then fallen - sent Victor Breyer and Eugène Christophe (the latter then yet to become famous for his broken forks) on a scouting mission to see whether it would be possible to return the race to the calendar. Breyer - British-born to French parents - was one of the movers and shakers in cycling at the turn of the last century. As a journalist and race promoter he visited the USA many times in search of new talent to bring to Europe. One of the founding fathers of the UCI Breyer had served as a director of the Tour de France - 1905 and 1906 - and was then an employee of L'Auto. Before that, though, he had been on the staff of Le Vélo and it was to him in 1896 that the task of scouting out the route of the first edition of Paris-Roubaix had fallen. Now, twenty-three years later, he was being sent out to do the same again.

In his report Breyer drew a picture of the Dante-esque reinvention of the lands through which the race was run:

"Shell-holes one after the other, with no gaps, outlines of trenches, barbed wire cut into one thousand pieces; unexploded shells on the roadside, here and there, graves. Crosses bearing a jaunty tricolour are the only light relief."

In Breyer's report, it fell to Christophe to coin the phrase that gave the race a new name:

"From Doullens onwards the countryside was nothing but desolation. The shattered trees looked vaguely like skeletons, the paths had collapsed and been potholed or torn away by shells. The vegetation, rare, had been replaced by military vehicles in a pitiful state. The houses of villages were no more than bare walls. At their foot, heaps of rubble. Eugène Christophe exclaimed: 'Here, this really is the hell of the North.'"

The roads and the men weren't the only damage inflicted upon Paris-Roubaix by the Great War. The little vélodrome in Roubaix that Vienne and Perez had opened in 1895 had been stripped of its wooden boards and its steel supporting structure and the race went in search of a new finish.

The Queen of the Classics

"Paris-Roubaix est une connerie." So says the Gospel according to Hinault and it's a brave man who argues with le blaireau. But, as the Queen of the Classics, it was a race Bernard Hinault had no choice but to win, connerie or not. And win it he did, in 1980, even after seven falls and having to shoulder his bike and run, cyclo-cross style, in Arenberg in order to pass race director Félix Lévitan's car. What a con.

Quite when Paris-Roubaix became the Queen of the Classics is unclear, but it probably dates to the post-World War II years, when the first real seeds of a united European racing calendar were sown by the creation of the Challenge Desgrange-Colombo in 1948. The publishers of L'Équipe in France and La Gazzetta dello Sport in Italy, along with Les Sports and Sportwereld-Het Nieusblad in Belgium, had come together to create a precursor of today's World Tour. Designed as a way to ensure the best riders rode the best races - well, at least those races organised by L'Équipe, La Gazzetta, Les Sports and Sportwereld - the Challenge Desgrange-Colombo added to the lustre of the biggest races by encouraging the biggest champions to add their names to their rolls of honour.

By 1949 Paris-Roubaix was important enough for Fausto Coppi to threaten strike action if his brother Serse wasn't awarded a contentious victory over André Mahé. Achille Joinard happened to be president of the French cycling federation at the time and was about to stand for the presidency of the UCI. With multiple constituencies to appease Joinard settled on an inelegant solution: Mahé and Coppi could share victory in the race. The following year a Coppi won the race outright when Fausto, his threat of strike by then forgotten, won the race with "a style and in a purity rarely to be equalled."

In the years since, many of the best riders in the world have won in Roubaix - Merckx and Hinault are on the race's roll of honour - and some have lost: Jacques Anquetil never managed to win the favour of the Queen of the Classics. In an era of specialisation, though, The Queen has lost some of her power. The crowds still flock, for sure, but the courtiers are increasingly staying away.

"It's a shame to say it, but Paris-Roubaix is losing more and more of its value because the great riders aren't there. I've always said that to win without risk is to win without glory."

Over the last two decades the big guns of the day - in particular Miguel Induráin and Lance Armstrong - haven't even tried to win in Roubaix. And this, some feel, is putting the race's future in doubt. Merckx, again:

"Paris-Roubaix will go on for as long as there are cobbles, but it's in danger. And you have to ask yourself if it's worth preserving the cobbles if they only interest a handful of riders, if those who stay away think it's old-fashioned and out of date? That's the problem."

Of the Classics, Paris-Roubaix is easily the Tour de France, with several documentary films made about it and a variety of English-language books telling its story. Les Woodland's Paris-Roubaix: The Inside Story is the latest addition to the cannon. Woodland - author of Cycling Heroes and The Crooked Path To Victory­ - tells the story of the race in a manner familiar to readers of his The Unknown Tour de France: starting at the beginning and driving the story forward but taking regular stops to veer off at tangents to tell interesting stories. So as well as learning about the race itself, Woodland takes time to talk about the changing role technology has played in the bikes used to ride it, or paints portraits of some of the race's champions and their victories on the road to Roubaix. Rich in anecdotes and incidental detail Paris-Roubaix: The Inside Story is a welcome addition to the cycling canon.