Think the Vuelta a Espana is the top of the heap for Spanish Cycling? Think harder!

On the eve of the first World Tour event in Spain for 2013, it's time to answer the question, what's with all the Spanish one-week races? How do you tell the Vuelta a Andalucia from the Vuelta a Asturias?

First, the list, and a little geography, with the help of the regional map down below. There are eight notable Spanish mini-tours, listed below the map in order of occurrence. 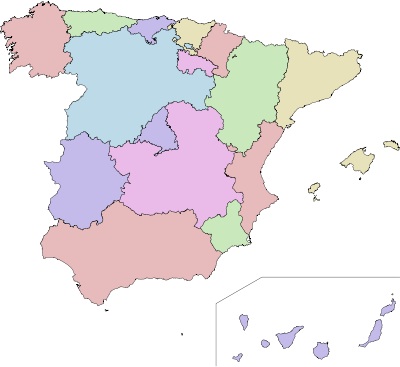 Latitude may not be everything, but it's no accident that the races start in the south and work their way northward as the seasons progress. Everything but Burgos is done by early May. Burgos is in August, a good time to get reoriented to Spain in time for the Vuelta Grande.

OK, let's see how they compare.

Where: Andalucia is the large brownish swath across the south. Within its borders are Almeria, Cordoba, Malaga and Seville.

Climby? Technically yes, except compared to the rest of this list.

Bottom Line: Historically this race has been available to climby sprinters like Freire or Zabel, but they've packed in some climbs (albeit not anything too drastic) since 2007.

Where: Murcia is the green patch at 5:00, just east of Andalucia.

Stages: Down to one; formerly as many as 6.

Rated Climbs per Day: 4, with a rolling, twisting finish.

Bottom Line: Each year they chop another stage or so off of this race. It's kind of like The Giving Tree. Now it's down to a stump. Somewhere in Murcia is a kid who doesn't appreciate this.

Where: Catalunya, home to Barcelona, is the tan-colored panhandle comprising the northeast.

Rating: 2.WT -- World Tour, meaning all the WT teams get invited, plus a few slots for Pro-Conti teams via wildcard.

First Edition: 1911, making it the fourth-oldest stage race in the world after Le Tour, the Giro, and the Tour of Belgium (huh?). Its winners' list reads like a who's-who of Spanish Cycling history: Poblet, Bahamontes, Lorono, Belda, Ocana, Lejarreta, Indurain... everyone except Contador. Oh, and the foreign winners are even more illustrious -- Anquetil, Merckx, yadda yadda. Barcelona was the heart of Spanish cycling back in the early years, so its local regional tour is naturally a big f'n deal.

Climby? Oh sure. Some editions have been pretty gentle, and with the race now in March (not May), even when they set out to include high mountains, the weather gods aren't amused. Last year's major ascent was shut down early. This is the Pyrenees, not Andalucia. It's still winter. Nevertheless, this year they've gone big again.

Rated Climbs per Day: Not counting the ten short hills on the stage 7 Barcelona loop, and not having reliable information, I'd say more than three.

Bottom Line: Whatever setbacks the event has suffered recently, the organizers seem pretty keen on making amends. If weather permits, this will be a race for the mega-climbers.

Where: The Basque Country (which culturally speaking crosses over into France) is the knot of pink, brown and green provinces at 12:00. The green is the Basque Country, brown is Navarre, and pink La Rioja. Basque autonomy has supposedly been written about before, I'm told

First Edition: 1924. Like a lot of things in Spain, it mostly didn't happen between 1931 and '68, but it's back, elevated to top rung, and possessed by mountain goats again. Some interesting names, including a lot of foreigners.. Gianbattista Baronchelli might be my favorite name, if not rider, from that bygone era.

Climby? A tour... of the Pais Vasco? Take a wild guess.

Rated Climbs per Day: 6, although they are mostly cat-2 and 3.

Bottom Line: Politics aside, the Basques love their cycling, especially when it goes up.

Where: Castilla y Leon is the huge blue patch running from the Basque Country to Portugal. The rain falls mainly here, according to Professor Doolittle, who knows nothing about the Spanish climate. Not to be confused with Castilla-La Mancha (splitters).

Climby? Each day is a bit harder than the last one(s).

Bottom Line: Strictly the domain of the climbers, provided they can also descent well.

Where: Asturias is the green wedge north of Castilla y Leon, west of the Pais Vasco and Cantabria (the purple blob). Oviedo is the crown jewel of Asturias, and the Picos de Europa make a formidable southern border.

First Edition: 1925, but wasn't a steady presence til 1968. Lots of B-list climbers find gold here among the Picas de Europa.

Bottom Line: The genius of all these one-week tours is that the various regions of Spain can be so different. Asturias, a cooler, wetter place, features some of the most daunting terrain in Europe (you've heard the name Angliru?), toppng out at 2650 meters. It's hard to draw a big field during the Giro, however. Oh, and the race is on life-support for 2013 and beyond.

Where: The purple triangle in the center. Despite the name, it's actually home to Madrid.

First Edition: 1983. Not many familiar winners, aside from Rui Costa.

Climby? Only the second stage, a classic end-of-Vuelta style affair with major mountains on tap.

Rated Climbs per Day: 4 on the climbing day.

Bottom Line: This isn't a race to take very seriously from our fan perspective. It happens in the middle of the Tour.

Where: Burgos is a small province in Castilla y Leon, tucked between the Pais Vasco and Cantabria. It's also the name of the capital city.

Climby? I... I don't think so. Well, last year stage 5 was a beast, but otherwise it was just little bumps in the road.

Bottom Line: A lot of waiting around, then a big mountain day. Hmm... sounds like perfect training for the Vuelta a Espana!

So there's your Spanish one-week tours primer. Know them, love them, and get em while they last.