You voted, we got through 32 first round matchups. But before the week is up, we must be down to our Sweet Sixteen! All four regional brackets are examined below, and the voting for Round 2 starts today!

First, a housekeeping note: there will be a single intro post and a single storystream containing all of the second round matchups. Same for the third and fourth rounds, semis and finals. In case you hadn't heard, there's a lot going on this week. So yeah, gotta manage the front page real estate carefully.

OK! The first round certainly had its share of twists and turns. In the newbies regions, managed by Ursula, saw some interesting action. Insert Sky RIder Here (later determined to be Ian Stannard) couldn't muster a strong challenge to injured Alessandro Ballan, but Thor Hushovd did manage to knock off countryman Edvald Boasson Hagen, while Niki Terpstra ousted Juan Antonio Flecha, only to have the Broward County Elections Board reverse itself during the recount. On the Belgian side, Nuyens and Van Summeren scored decisive upset wins over old lions Roelandts and Leukemans, on the strength of having actually won something.

As to the old guard, it was a tough first round for Henri Pelissier and Fausto Coppi. Pelissier lost out to Actual Maurice Garin, though there's no telling how much the Zombie Maurice Garin crowd turned out to vote as well. Coppi, meanwhile, was trounced by Gilbert Duclos-Lasalle, as voters punished Il Campionissimo for being better at other types of races, unlike the one-trick pony GDL. Among the Flandriens, only Eric Leman fell out among the higher seeds, knocked off by Peter Van Petegem and his magic 5:00 shadow.

In case you want to relive Round 1:

Here's where we stand for round 2. The first bracket is slightly mis-titled; obviously Fabian Cancellara is Belgian in spirit only. 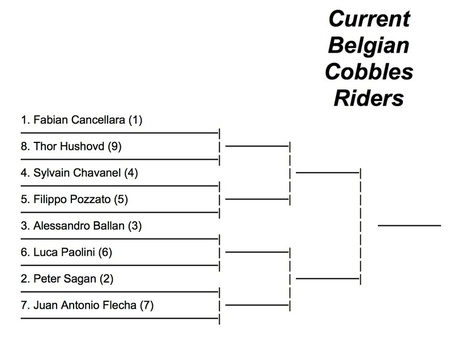 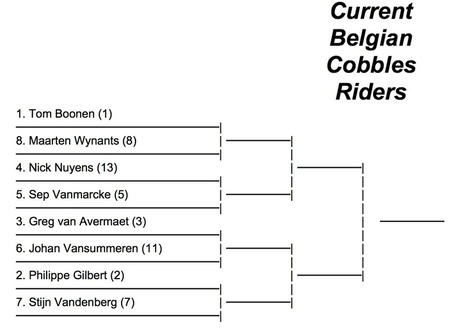 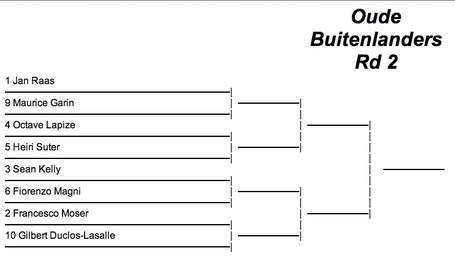 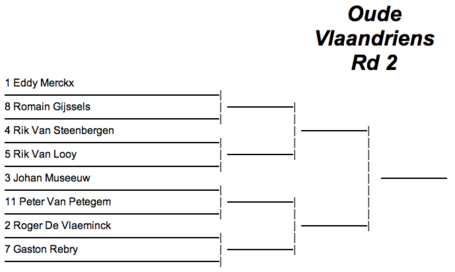 Some intriguing matchups, for sure! Rik I vs Rik II is an old score to settle, as is Lapize vs Suter. Kelly should have his hands full with Magni as well. I personally am looking forward to Pozzato vs Chavanel and Van Summeren vs Van Avermaet too. We will start adding the vote posts to the storystream shortly. Voting closes Saturday afternoon. Enjoy!