AG2R's Biel Kadri won the inaugural one-day Roma Maxima race in an historic setting, and with an ancient strategy as well: getting in a break, attacking the break on the final climb, and soloing home for the win.

Kadri was part of the day's five-rider breakaway, along with Crelan's Christophe Premont, Vacansoleil's Pim Ligthart, Andre Cardoso of Caja Rural and Albert TImmer of Argos Simano. As the race wound through the hills south of Rome, their advantage dropped down from over five minutes to something where the win was in doubt. But as the race approached its last summit, at the Campi di Annibale, Kadri attacked, had Cardoso hanging on for a bit, but slowly pulled away.

Kadri stuck his chain on the descent but freed it without stopping, then hit the Appian Way for the straight, nearly 40km run back to Rome. His advantage dropped as low as 29 seconds as the race hit a short, cobbled climb approaching the Colosseum, but the chasers, led by Italians Francesco Reda, Mauro Santambrogio and Vincenzo Nibali, eventually got swallowed by the chasing peloton rather than reeling in the Frenchman. FIlippo Pozzato won the sprint for second, celebrating as if he believed he'd won. Grega Bole also reacted like he had narrowly missed the win, pounding his handlebars, as he took third. 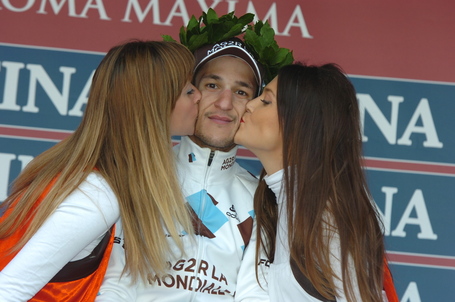