It was the result we were all expecting and there was no stopping Fabian Cancellara when he finally decided to put in the attacks. Peter Sagan came closest to following and he took second place with Lotto's Jürgen Roelandts in third.

Share All sharing options for: Cancellara wins Tour of Flanders

It was a game of wait, wait, wait today as no one seemed willing to commit to the longer attacks today. The big early break took a long time to establish and it never got much room to play, only about 3 minutes. Otherwise the big racechanging event took place already 19 km into the race when Tom Boonen crashed out of the race with injuries that look likely to keep him out of next weeks Paris - Roubaix as well.

Once the break established and the peloton reached the first climbs not much was happening except the race pace stayed high just as it had throughout. It was primarily Europcar that contributed to reducing the gap to the break but as the race hit the Molenberg, the fourth climb of the day, an attack led by André Greipel of all people established a chase-group of five with him, Michal Kwiatkowski (OPQS), Laurens De Vreese (TSV) , Marcel Sieberg (Lotto) and Martin Tjallingi (Blanco) that soon merged with the remains of the now disintegrating breakaway.

Over the next long fase that group was left dangling off the front of the peloton for a good long wile, mostly due to the lack of aggression on the Koppenberg and the first two Kwaremont/Paterberg laps. The Koppenberg did cause something of a selection when the traditional mid-pack swerve and un-clip held up a large part of the peloton who were forced to halt and hoof it up the last part of the hill in many cases. A large part of the unfortunates did make it back eventually but at the cost of expended, much needed energy. Likewise most of the escapees slowly trickled back to the peloton as the hellingen progressed.

It wasn't until after the second time over the Paterberg that an attack of dangerous riders slipped off the front. Offredo and Hinault were soon joined by Turgot and Lotto's Jurgen Roelandts as the race sped towards the Kwaremont for the third time and what looked certain to be the deciding moment of the race. The leaders entered the hill with about a 30 second lead but chased by a peloton that was going at full intensity as all the big names amassed to the front. Thoroughly unsurprisingly the big acceleration came from Fabian Cancellara just as it had in the E3. Sagan had his wheel and initially it looked like Edvald Boasson Hagen and Sylvain Chavanel, nov the OPQS leader with Boonen gone, were going to be able to follow the two pre-race favorites but that turned out to be short lived. As Cance insisted and pushed on Sagan was soon the only one in his wake as they approached the top of the hill. Kwiatkowski was caught and tried valiantly to hold on to the two but soon faded and for a brief moment just at the crest it looked as if Sagan was at the end of his rope as well but he managed to hang on.

Alone in front of the two was now only Roelandts but he soon saw the writing on the wall and rather than fighting the inevitable softpedaled while the others caught up to save some precious energy instead. And so as the three entered the Paterberg together Roelandts had to surrender about half way up but Sagan tried and tried to hold Cancellaras wheel and it was only at the very top of the short sharp climb that we saw the classic Spartacus escape occur. The over-cooked Slovak at the very limit of his ability let a tiny gap slowly expand on the false flat as the passed under the banner at the top and by the time Cance had taken the left turn he had maybe ten meters. The difference lay in the attitude though, Cancellara was already accelerating as his opponent continued to tread water and within seconds the whole race was decided. Sagan knew it, we knew it and hadn't Cance been so busy and focused settling into his patented timetrial mode he would have known it too. There was no coming back for Sagan at that point and his dropped head acknowledged defeat instantly. Regaining his wits pretty quickly he allowed Roelands to catch up so that the two could work together to hold off the chase in order to secure podium-places. 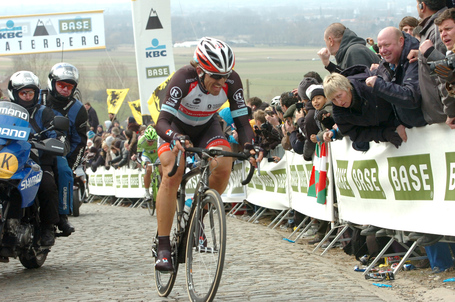 What followed on the way to Oudenaarde was fairly predictable. Cancellara motored on, reportedly covering the final 13 km at the astonishing speed of 49,3 km/h, and expanded his gap steadily to the two chasers. Those two in turn initially looked to have a challenge on their hands. They were both fairly cooked after trying their best to follow the un-followable Fabian and behind was a large group of chasers who could co-operate to put themselves in play for a podium-place. Unfortunately for the suspense though the group behind was not only just as fried but also had the unsusal problem getting any sort of cooperation going even though they had fairly identical interests. Subsequently the three "groups" paraded to Oudenaarde with the race-situations fairly unchanged. The long and fast race had taken it's toll and it seemed the only one with any kind of energy reserve left was Spartacus as he soloed across the line, clearly relieved to complete his comeback after a trying spring/summer season last year. He was quite obviously emotional as he was greated by wife and teamstaff after the line and the deeper importance of the event was apparent in the post-race interviews.

The overall conclusion after the race is that we got exactly the race-outcome we had speculated. There was no coming around who the major players were going to be and we had a fair one on one matchup between the two in the end. very little tactics and peloton-politics skewed the result in the end and this is starting to look like the trademark of this new parcourse. It is a demanding and worthy course that is designed to methodically strip the peloton down and expose the weak and allow the strongest to crystallize as the race progresses. Whether it makes for a more watchable race is a matter of opinion, quite obviously we can conclude that it makes for more of delayed gratification than we are used to in cobbled races. Normally there is a zone of roughly the last 2/5ths of the race where moves that influence the outcome can come at any point and often it's the tactical and strategic choices riders make in response to everything that happens there that ultimately decides what happens in the very last kilometers and who is still a factor by then. On the new Ronde course that slightly anarchic model is replaced by a more structured ramping up of the intensity lap by lap in a way that makes offensive maneuvers very difficult.

Of all the teams that had talked up the need to challenge Sagan/Cance early and often to have a chance to win the only ones who managed something was Lotto. All the others were caught in peloton that never really dropped intensity long enough for anyone to make a meaningful challenge hurtling the race to the inevitable late conclusion. The theories we had before, that last year's race dynamics were the result of peloton insecurity and uncertainty of how the course would play out were pretty much proven wrong. The peloton knew perfectly well how it was going to play out.

What we get is almost guaranteed fantastic racing on the last lap with the best riders on the day as protagonists (as long as they don't fall victim to misfortune along the way) and a winner that is almost equally guaranteed to be the "right" rider. What we don't get is a lot of the tactical nuances, it's an easier race in a sense. Be the strongest, use your team to stay near-ish the front until the last lap and be ready to go on the last climbs and you're in good shape. Gone is much of the fear that you will miss out on some decisive move or that some dastardly chancer is going to outplay you since their freedom of movement is drastically limited by the realities of the course. In short, if it's randomness and surprises you seek then look to the earlier semi-classics. If it's a battle between the best of the best you want to see, Tour of Flanders is very much the race you want.