Notes From the France Desk

That would be southern France. Nice, if I had my druthers. Anyway, as the season gets interesting, I write stuff down. So here goes...

Share All sharing options for: Notes From the France Desk

Paris-Nice opened with its usual madness today, including a pileup which will cost Movistar's Rui Costa a trip to the hospital with a suspected fracture. But thanks to the miracle of Twitter and my passing ability to guess at a few Portuguese phrases, it seems like things will be OK:

Felizmente is good news, so unless the part after it means "now I have fractured my nenhuma!" my guess is it's more like the x-rays are negative. Funny, ASO rolled out some motorized service for providing on-the-spot analysis -- a mobile x-ray unit. But maybe that technology can only address less subtle cases, like collarbones. Onward!

[Costa is a DNF, however, so unless he's driving to Italy at the moment, he will at least miss out on some race fitness. Boo!]

French Cycling is continuing its renaissance with a strong start to 2013, as Nacer Bouhanni's win in stage 1 of Paris-Nice, following Damien Gaudin's surprise prologue victory ups the totals for French riders to 22 wins (by CQRanking's count), with Italy a distant second (12). On the points side, France ranks second overall to Spain. These are two countries French Cycling hasn't compared favorably to for a while. Is this a surge of quality? Is this a sign that other countries are now as clean as French programs? Either way, it's a positive.

Bouhanni added to the national pride flowing through the sport at the moment by winning in his National Champion kit, a very tasteful and traditional bleu-blanc-rouge flag. French champions haven't exactly been bitten by any curses; Sylvain Chavanel held it previously, and rode with his usual panache despite not piling up the wins. Thomas Voeckler had it before that, and scored nine wins, including a Tour stage and the GP Quebec, in his colors. Bouhanni, just 22 years old, will be hard-pressed to match the record of his predecessors, but he's off to a good start, with a stage win in Oman (pictured above), and today's romp.

Whether he can win again in his colors is another matter. For one, Marcel Kittel might make the next sprint finale, after suffering an untimely mechanical today. Another problem for Bouhanni is that while tomorrow's stage may or may not present him with an opportunity, he won't have his French Nats kit; he'll be in the maillot jaune. And if he wins again, or comes close, the maillot vert will be next in line. Poor lad.

In case you missed it, Andy Schleck finished the GP Camaiore on Wednesday. This is the first race he has finished since Liege-Bastogne-Liege last year. Below is photographic evidence of Schleck finishing the race: 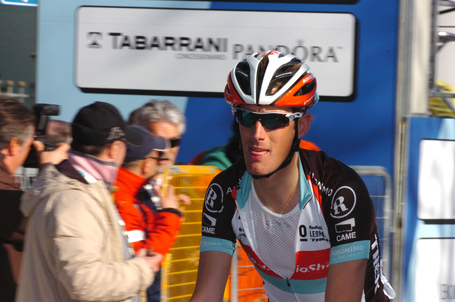 This week Schleck will attempt to capitalize on this recent run of form by finishing a stage race, Tirreno-Adriatico, en route to his goal of finishing this year's Tour de France.

I overslept for the Strade Bianche and part of Roma Maxima, but with the benefit of some replays I can say this: if there are two more beautiful spring races prior to de Ronde I don't know about them. Strade Bianche is just an embarrassment of visual riches, just Tuscany doing its thing with no embellishment. Whereas Roma Maxima is more like a tourist route for cyclists, linking together sights, except nobody feels played by RCS because how the hell can you complain about a bike race down the Via Appia to the Colosseum? In these two events cycling, especially the Giro organizers, have created another can't miss weekend, right after the first can't-miss weekend of the season, and before several more.

Oh, and laugh at Pippo Pozzato (Pippus) for his winning celebration, but I can think of a couple riders who aren't laughing about his form right now: old friends Boonen and Cancellara. 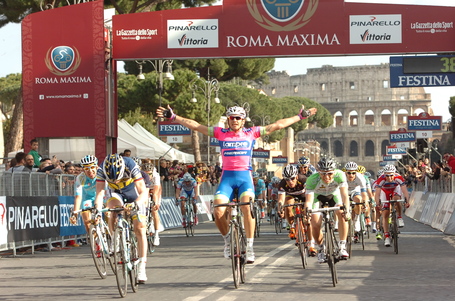