Talansky vs. van Garderen: First of many duels?

This weekend, starting tomorrow, might see the first of many battles of what promises to be the great new story-arc of US stageracing. The developing rivalry between two top level talents, Garmin-Sharp's Andrew Talansky and BMC's Tejay van Garderen.

Share All sharing options for: Talansky vs. van Garderen: First of many duels?

For perhaps the first time for real we are seeing both Talansky and van Garderen coming into a major stagerace, both 100% focused on going for the overall win. They've both been in similar positions before but this is really the first time they face off for real. Both of them are on a very similar program this year. The Tour de France is the main peak for both of them and they will both go into it with some level of protected status. BMC will probably give Evans one more run as captain but Tejay is very close at hand to becoming the de facto leader, it's very hard to see that BMC will hold him back as a pacemaker should Cadel falter even a little bit. At Garmin they always play their cards more openly. Hesjedal will likely make another run at a Giro/Tour double and behind him Talansky will have a free role. It's his first TdF so the learning curve is likely to be pretty steep so expectations should probably be adjusted accordingly. The parcourse couldn't be much better for him to debut in though.

More interestingly today is the Paris-Nice where they are quite clearly coming in with a 100% focus on going for the GC win and they have both built to peak for this week. The biggest GC hitters are grinding away in Italy this week and the P-N course is perfectly suited for the Americans who are both in the category "excellent timetriallers who can climb". Tomorrow's Montagne de Lure is an almost tailormade stage for both of them as is Sunday's uphill TT on the Col de'Eze. Quite clearly they have managed to hit good form as well as we've seen in the last days aggressive stages where both of them have been active. Talansky played the opportunist on the road to Brioude while TvG used his team-strength to contain the Sky/Garmin aggression and minimize the loss once he missed the initial attack. So far they look very evenly matched.

Tomorrow will be the main climbing test with a 13.8 km uphill finish at fairly steady percentages between 6 & 8%. BMC wil no doubt try and shred Talansky of his support, Garmin are clearly weaker here, but in the end it will come down to man against man in the end. Or rather it will be man against man against a handful of other men too since the Americans are by no means alone here. There are 22 riders within 30 seconds of the leading Garmin rider and several of them have the climbing/TT skills to challenge for the win. First among them are probably Richie Porte and last years runner up Lieuwe Westra. Westra had a rough day today but he still hung on. Porte on the other hand has looked supremely in control so far, biding his time for the weekend. This is likely his one big shot this year at a result for himself and he looks ready to take it. Then there is Chavanel, Peraud, Löfkvist, Velits and a few others who all stand an outside chance so this is by no means a duel. It will be a great weekend of racing on a well designed course that already has provided some cracking stages. The timetrial skills on Sunday should ultimately decide.

Ignoring all the others, what I'm most looking forward to is seeing how the Americans match up against each other since a good top level rivalry is just what the sport could use in the US to move on from the miserable Armstrong/USPS debacle. This represent something new, a fresh step away from the single-person focus of the Lance-era. If these guys progress we might have something similar to the old Hinault/Lemond rivalry for years to come. The more aggressive "Pitbull" Talansky against the smooth, cooler but more fragile van Garderen could make for some magic stageraces in the years to come with the Tour de France as the ultimate prize. 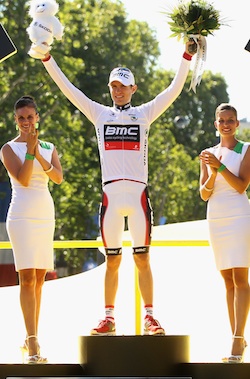 At the moment Tejay is the one who is slightly ahead on the development schedule. He's had a year more as a pro, he's done 3 GTs (1 Vuelta, 2 TdF) to Talansky's 2 Vueltas. He has a White Jersey in the TdF already and he's on a team where he is the obvious heir to the captain-role. Talansky might not quite match him in that department yet but on the other hand he hasn't shown the chinks in the armor to the extent that Tejay has either. Van Garderen has been in some excellent positions in races at this point and faltered in the deciding stages. We can file that away as inexperience and valuable learning experiences but if it becomes a continued pattern he has a problem. For Talansky the major challenge lies in continuing to progress in his climbing. He was good, but a level below the best in last years Vuelta. Given, it was a Vuelta of very strong climbers but he has a step or two to take before he can challenge for the biggest races. Also he has a trickier career choice to make than Tejay. BMC will quite clearly be a perfect vehicle for a coming American Tour-winner. They can afford the best support, Cadel is on the way out, age-wise if nothing else and with a bit of luck he can form a perfect combo with the more classics oriented Taylor Phinney, the third emerging US superstar. They can take the pressure for results off each other and Phinney might even work as the ultimate TdF helper in time, think Cancellara in the best years at CSC/Saxo.

Talansky on the other hand has more to ponder. Garmin is a much more multi-facetted organization than BMC. Clearly it is a good environment to grow. Somehow they manage to give many riders the space to develop and get their chances and they have a deep record of results near the top level. Will it be the optimal environment for a highly competitive TdF contender though? Can Talansky continue to thrive if he becomes the superstar he has the potential for? It remains to be seen if Garmin will make room, financially and mentally, for that type of rider, it's really an open question. It wouldn't be the first time a rider moved on to another team with the promise of bigger paychecks and promises of exclusive backing(*cough* Wiggo *cough*) but Talansky is very hard to read, it's hard to figure how he will react to offers of that kind.

For this weekend though all we have to look forward to is a match between their qualities on the road. Perhaps we will have some answer on Sunday to what the future of US cycling might look like. Right now it looks like a race to the sun in more ways than one.