Is Paris-Nice Over? [Hint: Maybe]

Richie Porte's performance today put the Sky stage-racer into yellow by 32 seconds over surprising American wunderkind Andrew Talansky of Garmin-Sharp. With one decisive stage remaining, that sounds like a lot. But is it enough?

Share All sharing options for: Is Paris-Nice Over? [Hint: Maybe]

So assuming no major shocks tomorrow -- and in fact, barring a major shock, we can assume the contenders will all finish in a tight group -- that leaves us with the current GC heading into the Col d'Èze:

As far as I can tell, last year's finale on the Col d'Èze was essentially identical: 9.6km, summit at 501 meters. There's a four-meter delta in the start, but that sounds like nothing (start ramp?). The otherwise awesome ASO official site has a poor profile of the stage, but I found this from 2012: 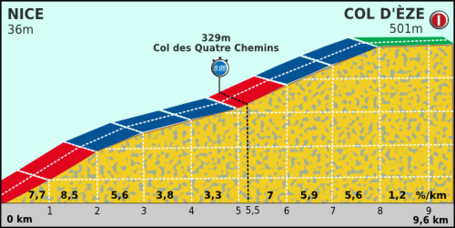 Having run the exact same stage one year ago makes for about the single best data point you can hope for in cycling. And even then so much is different: weather, people's condition, etc. Still, we know this:

Then there's what our eyes tell us: that Porte was clearly the strongest rider on the course today. Talansky looks like a clear #2, and you can't rule out a change of places, but my guess is that the GC holds straight through to the podium.