Mid-week semi-classic for the men but for the women Flèche Wallonne is part of the World Cup and hence one of the biggest races of the year. It also stands out as one of the few races that really favors the climbier riders. This years challenge (like every year): How the heck do you beat Marianne Vos up the Mur de Huy?

Fléche Wallonne is Fléche Wallonne, there's no getting around the fact that in the end it's all about the Mur de Huy. That super steep ramp at the end of the race dominates all the race tactics and it will in 99.99% of cases be where the race is decided. So it may seem superfluous to go through what the course before that looks like but it still has some bearing. The course for the women has actually been altered quite radically for this year. In short they've added about 8 km and the race now goes two laps around a loop that contains six categorized climbs for a total of 12 including two times up the Mur. While none of the climbs beside the Mur are scary in themselves it's still an increase from 9 climbs last year so the potential is there to make the race harder for those who wish to do so. 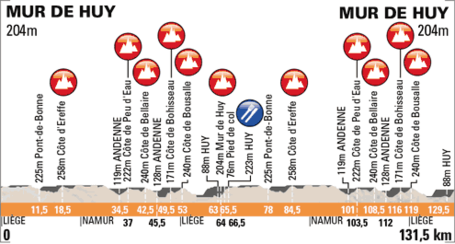 And this is where it gets interesting. Making it harder might just be the key in coming to terms with the big elephant in the room, the fact that Marianne Vos is totally dominant on a finish like the Mur de Huy and already has 4 wins to her name here. Last year Evelyn Stevens of Specialized -lululemon did manage to overcome her in the final meters of the sprint as Vos came to an almost standstill at the very top. The key thing to note is the accounts of that race is how Spec-lulu and other teams kept putting Rabobank under pressure with attacks in the latter part of the race making Vos chase to bridge to the leaders before the Mur. (We have to go by rider reports here. Since this is a women's race the video-images are kept under high security lockdown in the secret mountain fortress at Berchtesgaden, guarded from public eyes by packs of flesheating coyotes. And trident-armed Cyclopses, of course. You have to have the cyclopses.). It was by a slim margin in the end but maybe the difference was made as Vos dragged Stevens up to the front with her. So potentially the teams that want to take on Vos need to do the same now. They need to catch Rabobank on their heals and make them, including Vos, work hard to keep the race together to the Mur. It won't be an easy task as Rabo beside Vos have excellent cards to put in the attacks. Van Vleuten, Brand and Ferrand Prevot could all steal the race if they get in the tactical breakaways that make it all the way to Huy.

The potential for an attacking strategy may be both helped and hindered by the new course. Yes, it's longer and harder and the hills come one after one without much time for restitution in between. But in one major respect the changes favor a chasing pack (unfortunately?) . The distance from the penultimate climb to the Mur was 8,5km last year, this year it's an infinitely long 20 km which really should hurt any attackers, especially if the winds are unfavorable. It's a pity because 20 kilometers feels like too good an opportunity for the peloton to close down an attack unless the leadgroup ahead is one of those bigger selections were all the favorites are present.

I wouldn't bet many cents against Marianneke this year but the field behind her looks strong with two major, major exceptions. Emma Pooley isn't here and neither is Evelyn Stevens who is still recovering from injury . Why do I mention those two? Because they're the ones who have actually beaten Vos for the win here before . In Stevens absence, Carmen Small could make for an interesting leader for this race for Spec-lulu. She was great already last year and this year, racing for her new team, she has been one of the major revelations. It would be interesting to see what she could do here as a protected rider. Tayler Wiles should also be interesting to follow even if the gradients at the end should be a bit too much for her still.

Orica-AIS are otherwise the obvious contenders. They have both Emma Johansson, who has podiumed here three times, and Tiffany Cromwell who's climbing and improved level over the last year should make her one of the major contenders. No one has as many teamcards to play besides them either (except perhaps Rabo) with tiny Spratt along with Gunnewijk and Gillow who can all instigate the early attacks as well as do the heavy lifting on the front.

Among my other names to look out for, Ashleigh Moolman tops the list. She is going to have a really big result at some point soon and few oneday races suit her better than Flèche. The South African Lotto rider is one of the best pure climbers in the field today. There are also some interesting kids besides Pauline Ferrand Prevot who may be roped into domestique duty for Vos but could otherwise do well. Rosella Ratto of Hitec and Anna van der Breggen of Sengers are both the big up-and-coming talents for their respective countries and Ratto certainly should be a future winner in Huy. This year Ratto will probably be working for Elisa Longo Borghini. The Hitec captain will be looking to find some climbing form here as she is aiming for a big result in the GiroRosa this summer, the one stage race where you traditionally can't get anywhere without decent climbing skills.

No live video of course unless some producer of the men's race has taken his Crazy-Go-Nuts-pills and decides to *gasp* cut to the women's finish for two minutes during the mens slow death-march to Huy. It hasn't happened before so I wouldn't count on it, but hey we can dream?Instead we can hope for highlights on the UCI youtube-channel later in the evening and lots of great updates via twitter and in our open thread here on PdC.As usual Sarah has a guide on how to follow the race best and with more meaty info on the race.