Step back into history with me for a minute. Think back to the steepest hill you have ever ridden. Imagine ascending it again. Your legs, they churn slowly as you grind your way up out of the saddle. Quads burning just to make it to the top. We have all encountered hills like this, but few of us have ever raced up them, let alone had to sprint to the top.

Share All sharing options for: Flèche Wallone Preview: 204km of Waiting for the Mur de Huy

Yet, this is exactly what riders must do this Wednesday when the ascend the murderously steep Mur de Huy, which has gradients of up to 26% in its middle, not once, or twice, but three times during Flèche Wallonne. The last ascent is the hardest because the race finishes right. At. The. Top. Revisit that memory of your steepest hill. Can you imagine having to sprint up it full bore now? Now you know why this race is a classic.

If you need any proof? Just look at the list of recent winners - Gilbert and Evans won in 2010 and 2011, then Joaquím Rodriguez in 2012. This is one finale where you will never see an undeserving winner. Want to know more?

La Flèche Wallonne literally means the Walloon Arrow, named after its distinctly shaped profile through the Wallonia region in Belgium. That's the part where they speak French and make baby Phillipe Gilberts. The arrow starts in Charleroi and travels to Huy, where it begins its first ascent of the legendary Mur. After the first ascent, riders will do two circuits of decreasing length, each with a fair number of climbs to navigate. As you've gathered by now, each lap goes over over the Mur at the end of the lap. Phew, bring your climbing legs! 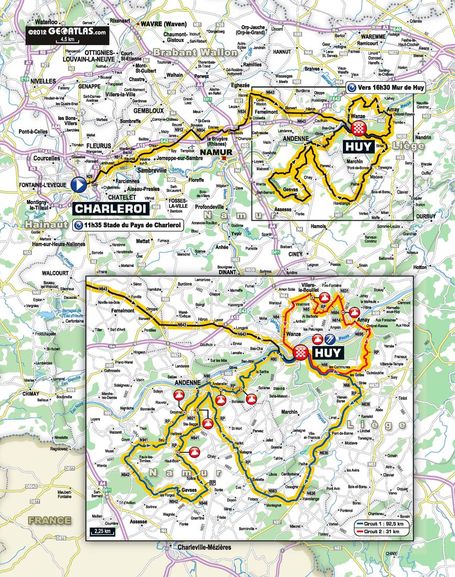 The course weeds out a fair number of riders, but because the finish is so hard, we usually see a group of 50+ riders hitting the bottom of the Mur de Huy together with 1300m to go. A few daredevils may take advantage of the greater number of climbs put on the finishing circuit last year (and spaced closer together) and try to sneak away before the Mur. This rarely works, though, and is rarely even attempted such is the capacity of the Mur to demolish a time gap of under 20 seconds. Ryder Hesjedal and Lars Peter Nordhaug tried last year and for a moment it appeared their audacity may be rewarded until the double digit gradients halfway up the climb quickly proved their adventure a folly. 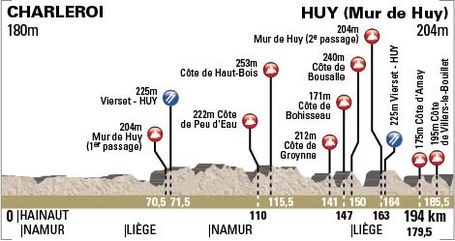 And the Mur? It starts off gentle, enticing a few doomed attacks near the base. But the smart riders refrain, knowing there is 1300m at an average gradient of 9.3% awaiting them. These early attacks, they fizzle when the climb begins a prolonged section in the neighborhood of 11% from 900m-500m to go. And then? 100m at 17%. This is where the dreaded 26% gradient is located, right in the middle of a turn. The words "Huy Huy Huy Huy" taunt the riders, all of whom are going plenty slow enough to read them. The riders who have a chance at the finish all move to the fore here - or, more accurately, every mortal falls behind. But nobody makes their move yet.

Riders who attack before the final 100m? They are the ones who mis-judge the finish, except for perhaps Emma Pooley and Phillipe Gilbert, who turned on the afterburners from further out in their recent victories. Do you remember 2010, when Contador put in a searing acceleration with 200m to go and looked to have the race won? Until Cadel Evans (victim of the same tactical blunder in years past) started his sprint with 100m to go?

Patience. That is how you win here. For illustration, the 2010 edition.

Who likes this finish? Two types of riders, actually. The pure climbers, especially the snappy ones, always do well here. My pick would be Joaquim Rodriguez, who won last year, but he fell in Amstel Gold on Sunday and his knee may not be quite recovered. In lieu of J-Rod, my pick would be Alejandro Valverde, a former winner, ahead of Philippe Gilbert.