26th-28th April 2013 While Specialized-lululemon are dominating in the hills of the Czech Republic, the bulk of the peloton will be in different hills - in Luxembourg, riding one of my favourite races of the year, the Festival Luxembourgeois Elsy Jacobs.

When I think about this race, I think about standing in the sunshine, eating delicious waffles with fresh strawberries, and smiling at riders streaming past to the sign on - and walking from the Mamer feedzone down to the startline, cheering the riders each time they came past on a lap. I went to the race in 2011, with then-Horizon-now-Matrix Fitness Racing Academy, and it's a fantastic one to visit - well-organised, with lots for spectators to see, and some seriously good riding, in pretty countryside full of castles, vineyards and fairytle woodland. In fact, Café resident maybe is out there right now, AND I'M NOT JEALOUS AT ALL, honest!

The race has evolved in a really interesting fashion. It started with the Randonnée, the mass participation ride, which was first ridden in 1998, in honour of Elsy Jacobs, the first ever Road World Champion in 1958, who came from Garnich, a small village to the east of Luxembourg City. In 2008, the GP Elsy Jacobs day race for elite riders was set up - 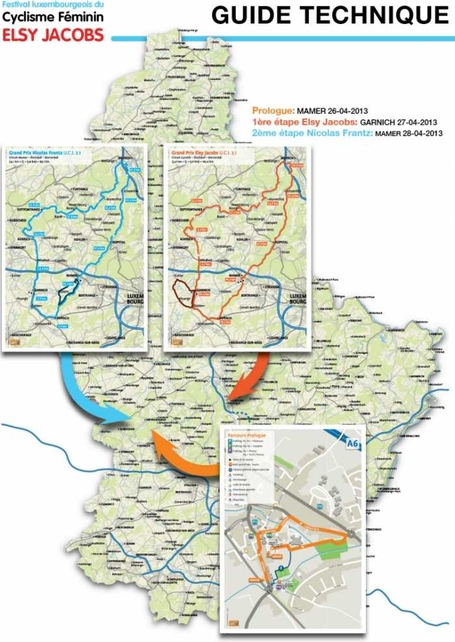 this became UCI ranked in 2009, and in 2010, was joined by the GP Nicolas Frantz, in honour of the 1927 and 1928 Tour de France winner. In 2011, a team time trial was added, and last year these were combined into a stage race. It's lovely, in these days of watching race after race collapse, to see women's racing developing like this.

This year, the race starts with a very short prologue, a flat, fast 1.8km in Mamer, starting at 17:30. Watch out for all the trackies, this will be perfect for them!

Stage 1 is the traditional GP Elsy Jacobs - 102.6km, starting and finishing in Garnich. One big lap (with the famous seven castles), on narrow roads through rolling countryside, ending with a long climb into the village - and then 5 laps of a 9.8km circuit. This tends to be where the race really starts, because it's got two hills on each lap, and ends with an uphill run - and again, it's narrow roads, so mechanicals can mean disaster. The fun thing about this race is that although we can get very familiar with the course over the years, we can't predict what'll happen - solo break, small group, bunch sprint? It's all been done! It's always attritional, though - and the jury are ready at each lap to pull out riders who've dropped too far back. It's a really lovely race, and you can see some video of Emma Pooley winning it in 2010 here. This was where there were the waffles and brass bands in 2011, though, and the DSs having coffee in a café on the route before the race!

Stage 2 starts in Mamer again - with the same loop as the day before, just starting and finishing in a different spot. It's a shorter stage, 99km, so the riders can get away early (one of the things this race is known for is being easy to race, very smooth indeed for the teams, which is one of the reasons we have such a great start-list). Once they've ridden the loop, it's 5 laps, with a climb into it - this one is more likely to go to a sprint from a group, but still breakaways are very possible. Watch Annemiek van Vleuten win the stage last year! This is the stage where Schlecks are most likely to turn up - and there's been a big tent with barbeque and more live music, and excellent commentary on loud-speakers, in three languages - and the permanance in a fire station.

You can find a huge amount of information about the race on the lovely website - including the very comprehensive technical guide with stage profiles etc. As always this year, there's a race preview on the ORICA-AIS site, by Tiffany Cromwell, who knows this race well. And you can find other race previews - on Velofocus, with lots of interesting stats and streetviews, to give you an idea of the route, on Les Déesses de la Route, which is a narrative preview (with lots more information than this one!) or if you want one in Spanish, there's one on Cobbles & Hills.

The startlist on the website has all the big teams except Specialized-lululemon, RusVelo and Pasta-Zara Cogeas, who are in the Czech Republic, and Tibco, who are in the USA. But that startlist (much to the annoyance of the organisers) will not be finalised until teams show up and tell the race who's riding! Cycling Fever's startlist is more likely to be accurate, but still, we'll probably only get the definite one with the Prologue results.

Last year's winner, Marianne Vos, will be here for Rabobank, but given that she was racing MTB in California last weekend, she might not be in her best form, although this is Vos... Look out for the Classics types - Emma Johansson, Elisa Longo Borghini, Adrie Visser - and all the breakaway artists. A rider could easily pull out a couple of minutes on Stage 1, and hope Stage 2 ends up as a bunch sprint - although equally, a mechanical or getting caught behind a crash on those small roads, could scupper GC chances. It's going to be a lot of fun, whatever happens!

Follow it with the usual twitterati - Richie Steege of Boels-Dolmans, Karl Lima of Hitec and Bart Hazen of Wiggle Honda - and this year, maybe will be there too - if he starts tweeting, I'll add his details in!

The hotel here has great internet, and as always, Cafee-sters will add things into the comments as the race progresses, so check back often - and if there's anything YOU see, add it in too! Now, excuse me, I'm going to go and daydream about going back to the race next year ... maybe I can meet you before the race, and we can go autograph and photo hunting before the start? Once the race has left, we can grab a coffee and explore the village, and then grab some beers, walk to the top of the hill for the first little lap, and then stroll back gently, talking to team staff at the feedzone, and tweeting the race updates as they pass us each time - before getting back to the finish-line for the end of the race? Sounds good, doesn't it ...