Andrew Sykes rides from Reading to Brindisi as he crosses Europe on a bike called Reggie. 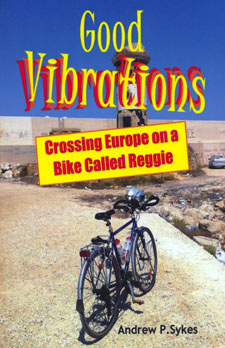 Title: Good Vibrations: Crossing Europe On A Bike Called Reggie
Author: Andrew P Sykes
Publisher: Cycling Europe
Year: 2011
Pages: 308
Order: CyclingEurope.org
What it is: Blogger rides bike from Reading to Brindisi.
Strengths: If you're ever thinking of riding from Reading to Brindisi you may find this invaluable
Weaknesses: A rather unadventurous book for such an adventurous journey.

While watching the road races in the Beijing Olympics Andrew Sykes, a teacher based in Reading and soon to be looking at his thirties in the rear-view mirror, decided he needed to do something exciting:

"Really exciting. The kind of exciting that makes other people stop and want to know more."

Me, I'd have gone off and learned how to juggle flaming chainsaws. Sykes, he decided to go and ride his bike all the want to Puglia, away off at the bottom of Italy's boot. Why Puglia? Because it was just about the nearest far away place Sykes had friends who could put him up when he got there.

There then followed two years of thinking about it before, in the Summer of 2010, Sykes set out from Reading and, pointing eastward his pannier-laden Ridgeback Panorama (affectionately named Reginald, or Reggie for short), set out on his awfully big adventure.

Plotting a route from Reading to Puglia is actually pretty easy: pick up a map with both on it, draw a straight line and then flex that line where it needs to hit seaports and inhabited areas, or avoid super-big hills. As navigation exercises go, its not up there with midnight map-reading in the Brecon Beacons in the depths of Winter. Even better, though, is that this is a trip that, in large parts, tens of thousand have done in the past, over hundreds of years.

England and Italy are linked by an old pilgrimage road, the Via Francigena, that runs from Canterbury to Rome. Not nearly as famous as, say, the Camino de Santiago de Compostela, the Via Francigena is nonetheless an important pilgrimage route. The earliest known detailing of the Canterbury-Rome version of it comes from the tenth century when Archbishop Sigerac - Sigerac the Serious - recorded his own journey to Rome and back

Today, the Via Francigena also exists as the Via Romea Francigena, a part of the European Cycling Federation's web of thirteen cycle routes around Europe, the Eurovélo network. Travelling from London to Brindisi, the Eurovélo 5 route takes the rider from the English capital to Lille (the big one, not the other one) by way of Dover and Calais, before heading into Belgium and passing through Brussels and then heading on to Strasbourg. Then it's downhill all the way, through Basle into Switzerland and crossing into Italy at Chiasso. After which you just keep tumbling south until you run out of Italy to tumble south through.

The history of and the stories behind both these routes - the Via Francigena and the Via Romea Francigena - is probably really interesting and full of fascinating stories. Which go untold in Good Vibrations. As it isn't that kind of travel book. This is a story of adventure, of an epic journey. Of crossing Europe on a bike called Reggie.

Actually, mostly it's a story about the difficulties of finding your way out of towns and cities in the morning and the constant worry that the traveller won't find his campsite at the end of the day. Now and again there's a bit of Rough Guide description of a couple or three sights. And now and then there's that strange starry-eyed comparison between things Continental and things British, with things Continental invariably being better than things British (with the notable exception of Italian drivers). As a for instance of this, here we find our traveller in Boulogne sur Mer, where a friend has taken him ballroom dancing for the evening:

"It's difficult not to admire the French when you come to a place like this. The building where the dancing was taking place was in a small village but was relatively new and must have cost at least several hundred thousand euros. The signs in the entrance hall detailed the busy schedule of activities that were taking place on each night of the week and clearly it was a valuable piece of infrastructure for the local community. It was clean and had a smart, tarmac car park, neatly tended garden around the perimeter of the building and proudly displayed the local shield above the door. There was no graffiti, no litter and no piles of cigarette butts outside the entrance. Now imagine a similar community resource, if you can, back in the UK..."

The high point of Sykes's journey - altitude wise at least - was the Gotthard Pass. Earlier in the book Sykes had turned a small set of stairs he had to carry his bike up into a challenge equal to Everest (at the top of the stairs Sykes stopped and said "If I had had a flag, I would have planted it, Edmund Hilary style, in the nearest patch of ground. I looked around for applause but there was none."). Surprisingly, then, the ascent of the Gotthard is more or less glossed over in a couple of paragraphs which say very little (Sykes was climbing the north side, so that may be fair). But the summit itself, well that merits more. Lots, lots more:

"It seemed a world away from the classy tourist trap of Lucerne up there at the Saint Gotthard Pass. It was more in line with the disappointing array of entertainment that you can find at Land's End or Stonehenge back in the UK. There was a museum which, if it had been free I would have wandered around. Unfortunately the first exhibit, which I could see just beyond the entrance desk consisting of some waxwork figures of the first people to cross the Alps complete with animal skins, didn't shout 'come in and pay a small fortune to spend half an hour with us in here.' I gave it a miss. Anyway, who needed a bunch of inanimate cave dwellers when there was as much amusement to be had outside watching their modern day equivalents? I sat on a bench next to one of the smaller lakes just opposite a horrendously loud Italian woman. She was, between sentences, noshing on a bratwurst sausage that she had purchased from the stall at the back of one of the shipping containers I had noticed on my arrival. It had been carefully placed just in front of a praying Virgin Mary. Nice touch."

And on and on Sykes goes about how nasty the summit of the Gotthard Pass is before - bizarrely - getting through the sweeping switchback descent in a couple of lines.

One other quote from the book for you. Here Sykes is back in Strasbourg, where he's just discovered a bike race on his doorstep:

"Just as I was finishing the last few sips of my coffee, a van pulled up and out jumped a small band of enthusiastic (and brightly-dressed) young people. They immediately started to dress the podium, crash barriers and even the inflatable arch (don't use drawing pins!) with publicity material for the Tour Alsace 2010. I had been correct; it was a cycle race albeit a relatively local one. In fact it was the second stage of a five étape event which had started in Colmar (my destination incidentally for the following day) on the previous day and would end the following Sunday in a curiously-named place called Ballon d'Alsace. Today's destination, after an invigorating cycle of 153 kilometres mainly around the Vosges Mountains would be Bischoffsheim, a small town south-east of Strasbourg. How exciting! Unfortunately for me the time of departure was set for midday, the same time I had arranged to meet Claus in La Petite France so I would miss seeing any racing but it was still interesting to watch the build-up and gave what would normally have been a quiet Thursday morning in the square a bit of a buzz. The French love their local sporting events. The old guys with moustaches had probable watched the Tour Alsace (or something similar) as kids, gone on to perhaps race in the event themselves and then taken on the mantle of organisation later in life."

That bike race story I found funny, not for the way it is recounted, but for the manner in which it mirrors a moment in Ernest Hemingway's The Sun Also Rises, where the narrator comes across the Vuelta Ciclista al País Vasco in San Sebástian, goes drinking with the riders that night and then sleeps in the next morning and misses the départ. As well as both missing the actual race, the same point is also made about the French loving their sporting events.

Things missed is probably a good way to sum up the overall effect of Good Vibrations, with me left wondering what it could have been and instantly forgetting what it was. I wondered about the journey of internal discovery it could have been, Sykes questioning just why he needed an adventure, and why then with forty fast approaching. What questions could he have asked about motive, about which came first, the idea of the journey or the idea of the book of the journey? What Kerouacian epiphany could have befallen the author on the road to Brindisi were this a journey of discovery instead of just an adventure done to generate a yarn?