VaPV: Quintana King for a Day

Movistar's Nairo Quintana climbed another rung on the development ladder with a late, flat attack to win the so-called Queen Stage of the Vuelta al Pais Vasco.

Share All sharing options for: VaPV: Quintana King for a Day

Under dark clouds and on wet roads, Quintana and his Movistar mates led the pack in a chase of the day's escapees -- Peter Velits (OPQS), Matteo Montaguti (AG2R) and Daniele Ratto (Cannondale) -- approaching the final climb to Eibar. With Sky sitting back and allowing the break to reach upwards of four minutes as the finish line approached, Movistar decided to act first and foremost, and by the time the pack hit the first category Alto de Usartza, the escapees' gig was up. Various accelerations whittled the leaders down to a group of six, including overnight leader Sergio Henao of Sky, his teammate Richie Porte, Alberto Contador of Saxo-Tinkoff, Quintana, the two AG2Rs Carlos Betancur and JC Peraud, and a seventh, Simon Spilak of Katusha, occasionally off the front. As they crested the climb and headed down the last 2km to the line, Quintana preempted the sprint with a late attack, rolling home with two seconds in hand over his companions and another 23-60 seconds over all the remaining challengers. The stage results were as follows:

This leaves the GC pretty spread out heading into the final two stages:

At this point it's tempting to start calculating time trial gaps and declare the final podium (I'd have Porte, Contador, then either Spilak or Peraud). But underestimate tomorrow's stage at your peril. The 166km ride from Eibar to Beasain is ripe for tactical madness -- an endless array of climbs, including three trips up the Alto de Olaberria (1.4km ranging from 11-16%), with the last time a mere 6km from the line and coming in succession after two tough climbs. I don't know who the strongest rider will be and whether he'll be able to drop everyone for a decisive win, but if it's anyone but Porte, look for him/them to try. 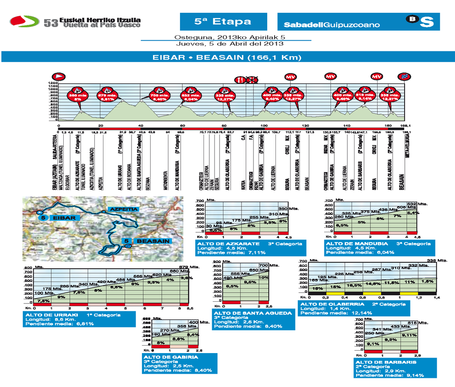