Paris-Roubaix: Can He Be Stopped?

Upsets don't come cheaply in Paris-Roubaix, or any of the classics. If there's to be one Sunday, it'll come from something special.

Share All sharing options for: Paris-Roubaix: Can He Be Stopped?

It's funny, some of us (OK me) spend the winter watching the imaginary roster of potential cobbles champions grow before our eyes. Cancellara's back! Boonen too! Boom is getting better! Sep is older! Breschel... can't be worse! There are the old guard, struggling on in a game that doesn't punish aging like some other aspects of cycling. There's a new crop of talent, always full of more promise than the last one. Rosters are stacked everywhere you look.

BMC? They've got the superstar (Gilbert), the most promising kid (Phinney), the aging warriors (Ballan and Hushovd) and the guy you can't turn your back on (Van Avermaet). OPQS? Boonen and his minions, always surrounded not merely by helpers but by guys who are a credible threat to win. Sky, so good at everything, always. Raboblanco, endlessly talented, adding Belgian talent to their Dutch wellspring. Garmin, battle-tested and forever sneaking up on people. Katusha, Orica-GreenEdge, Astana, Lotto, Cannondale... Where does it stop? 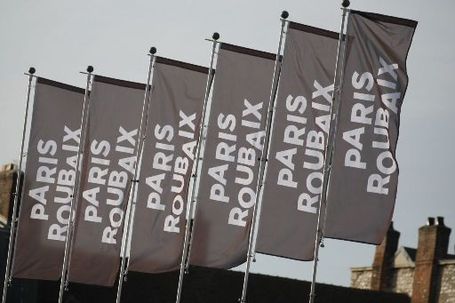 On the road, that's where.

2012: OPQS win everything, largely in the person of Boonen, and if you were even thinking that they could be stopped in Paris-Roubaix, Boonen goes from 60k out just to hammer the point home.

2010: The Cancellara Confirmation, still unsure until the Muur, but surprising nobody the following Sunday.

2009: With Cancellara unfit, Boonen dominates, either in person or by proxy.

2007: A year of great upsets, although not inexplicably so.

2006: Only in France did the Boonen Express derail.

See any themes? I do: most years, no matter how great the competition is, no matter how many threats to win we can credibly name, the monumental classics almost always seem to not only fall into the hands of a dominant champion, but really don't feature a whole lot of guys outside of the dominant champion class -- a class of two at the moment. After three weeks of previews, how often do we get to Paris-Roubaix and don't feel like we basically know who's going to win? Yes, the classics can be fickle, especially this last one, when it comes to bizarre turns of events. No prediction, however certain, can afford to drop the "barring misfortune" caveat. But barring misfortune... can Cancellara be stopped?

I don't see it. Granted, when you have a single dominant guy, teams become especially desperate to stop him. Were Boonen and Ballan on hand, you might see those teams join Radio Shack in patrolling things and setting up their guy for a traditional attack on the Swiss Bear. Right now, Cancellara's class is so unrivaled by anyone healthy enough to take the start that he has put every other team in a position of feeling like they have nothing left to lose. [Well, I don't know how they feel, but certainly that's how they should feel.] Any team with multiple strongmen can think about putting one of them up the road and forcing a 2011 moment, where Cancellara can either sit back and argue with other teams' directeurs or take up the chase himself. He has a good team at his disposal, but if they get shredded, it will be one man against the world.

Here are a few teams that should be thinking very seriously about ganging up on Cancellara, as opposed to sitting back and just taking it.

And there's another crop of riders to throw into the mix, from the teams not likely to dictate tactics: Garmin (Van Summeren); Europcar (Turgot); Argos-Shimano (Degenkolb? Sinkeldam?); Lampre (Pozzato); Katusha (Paolini); IAM (Hausser). Is that enough of a counterweight to the Great Cancellara? We'll know soon enough.