Help us create our Final Four as we move closer to determining the all-time champion of the pavé.

Wow, this is getting very intriguing. The third round saw our most dramatic result yet, and possibly the hardest to imagine... the dethroning of Eddy Merckx! Now, before anyone gets too verklempt, he was taken out by a fellow Flandrien, Rik Van Looy, a near-contemporary and rider whose credentials in this competition made it a strong possibility that we'd see a change at the top. Van Looy, in fact, won by a convincing 2:1 margin. His merits, which will be repeated in the post for his next matchup, speak for themselves.

The only other upset, at least from a seeding perspective, was the thrashing 11-seed Johan Van Summeren put on Philippe Gilbert, more than doubling the World Champion's vote totals. But Summie has been a force since this competition began, so I wasn't exactly floored by his success. Ballan over Sagan isn't a big deal. Kelly over Moser is debatable (and was debated, coming down to two votes). 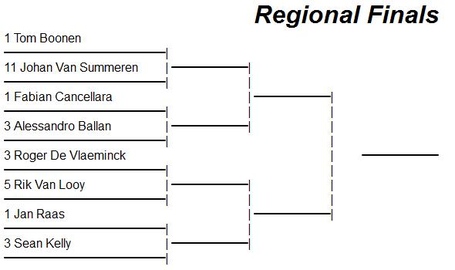 Now we pick the champions of each region. Let's preview the matchups a bit, then leave the data for the vote posts.

Training partners and ex-teammates Boonen and Van Summeren square off in what promises to be a prickly affair. Boonen will be prejudiced, perhaps, by his current condition (home in bed) while Van Summeren is a dark horse for a second Paris-Roubaix. Might not be enough but it would give voters something to ponder.

Another matchup of regular combatants, as Ballan has been found on Cancellara's wheel in past classics seasons, as well as having dropped the Swiss Bear a couple times in Flanders. But the injured Italian is an underdog, no doubt.

Fourteen years separated these two combatants from each other, which means they probably faced off in real life only a few times (e.g., in 1969 Rik won E3, Roger won the Omloop). Both have tremendously strong cases to make. This is the best matchup of the round.

Another clash of near-contemporaries, as Raas won his last monument (1983 Flanders) the same year Kelly won his first (1983 Lombardia). This is easily the most fluid matchup, in that their cases are subject to interpretation, as opposed to the pure, unassailable dominance on the cobbles of the Belgian oldies.

As usual, voting will be in the individual matchup posts, and we will create a story stream to house the posts all together. Polling ends Monday morning. Have fun!