What is the point of sport? For Noam Chomsky - cunning linguist and left-wing slayer of political dragons - it is just bread and circuses, a distraction from reality, a grand waste of time, energy and intellect. Set against the suffering of our world the time and energy invested by participants, administrators, media and fans alike is a waste that could be better spent building a better world. In the stories that make up Coppi's Angel Ugo Riccarelli shows that, for its participants, sport is life and, for the people to whom these sportsmen are heroes, their actions on and off the field of play can be inspirational, lights to guide lives.

Share All sharing options for: Coppi's Angel, by Ugo Riccarelli 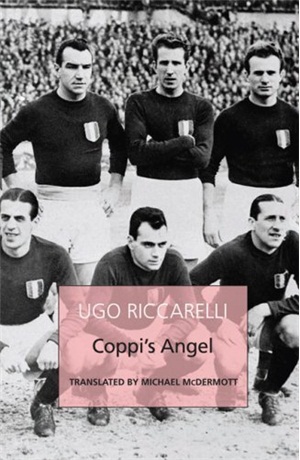 Title: Coppi's Angel (translated from the Italian L'Angelo di Coppi)
Author: Ugo Riccarelli (translated by Michael McDermott)
Publisher: Middlesex University Press
Year: 2001 (translation 2007)
Pages: 137
Order: Libri Publishing
What it is: A collection of sport-themed short stories.
Strengths: Riccarelli's style is economical, direct, but poetic and laden with half-buried meanings at the same time.
Weaknesses: Some may find the tales told too laden with darkness, the uplifting elements matched by tragedy.

"To describe athletic feats is to recount epic deeds, rather like Ulysses or Ithacus. I love the infinite variety of the worlds of Shakespeare and Brahms, so I have spent my time writing about Schiffino's sublime skill, which arouses the same aesthetic pleasure as reading literary verses or listening to a classical symphony. However, it is not necessary to be a great scholar to see in a pass from Di Stéfano the moving perfection of a hendecasyllable. According to Freybart, sporting competition is a profound element of life, something men often misunderstand as they continue to run after the ball without fully understanding why. Searching for men's obscure motivation now seems to be a futile exercise, so I am content to merely report what has happened."

That passage from 'The Invincibles' - a tale about the Superga tragedy and one of the stories that make up Ugo Riccarelli's Coppi's Angel - is recounted by a reporter who has set out to understand what makes great football teams great, to unlock the secret of their invincibility. The reporter may have abandoned the quest for motivation, but it is that search which is at the heart of the tales of his creator.

Let's take a look at the story of Emil Zátopek, the human locomotive. At the 1952 Olympics in Helsinki Zátopek won the 5,000 metres, the 10,000 metres and the marathon, all in the space of eight days. Three Olympic gold medals in three of the Games' toughest disciplines, a triple crown no other had previously pulled of (and none since, either). Zátopek became a hero to the world. In his native Czechoslovakia he was lauded and applauded. Until the Fall after the Prague Spring when Zátopek, who had spoken in support of Alexander Dubček's call for independence, was on the wrong side of the Soviet tanks that imposed a new order.

Zátopek, who as hero to the nation had been elevated to the rank of colonel in the army, was offered the chance to recant his support for Dubček. He demurred and became an outcast, stripped of his rank and dismissed from the Party. He became a builder of houses before being sent to the mines. The greatest endurance athlete of his age, he endured, even when offered opportunities to defect. In that endurance Riccarelli finds a symbol, and explains it in an imagined conversation on a training run one day:

"'Mr Zátopek,' [the other runner] said, 'please continue your race, continue to perfect your endurance. We are all grateful for your presence, for the fact that you have not left Prague, that you are here alone battling on. Think of what I say: we are already on the run, we have sprung away and they have recaptured us. It is from you that we have learned not to be defeated, to never give up. To grit the teeth even when you feel pain, even if it seems the weight of the world is on your shoulders. It is from you that we have learned not to have fear, that if we look ugly when we are running, if we are sweating or have cramp, the important thing to remember is that we are running to reach the finish. You have taught us the power of stamina, to try each day to increase it by a metre. We need you because the escape will be a long one, and to think that a human locomotive is running with us will give us hope and strength to continue with our race. The armed forces have taken away your job, but you continue to keep training.'"

Certain purists may object to Riccarelli's blending of fact and fiction, the manner in which he takes real people and imagines incidents that never happened. loading them with mythical importance. Fiction, some will say, should be an act of pure imagination while facts should be sacred. Maybe here, though, cycling fans have an advantage over such purists: when you are told time and again that Gino Bartali saved Italy from Civil War in 1948 by winning the Tour de France such imaginings as Riccarelli's seem almost innocent. We know that the reality of Bartali's contribution to Italy's political crisis is unimportant, that the story is more about the way Bartali has come to be seen.

The truth is that Riccarelli's stories are not about truth. Rather they are about the truths these tales have been imbued with as they've been passed around, the truths they have become embodied with. The true truth is unimportant here, as Riccarelli notes in an afterword, talking of how sporting stories were passed among his circle of friends:

"It does not matter at all to me if it was all made up, if Giando invented all the matches. The names of those mythical players were already part of our history. I would listen to their imaginary actions, listening enthralled with my heart in my mouth. That was our epic. It was our action replay."

As Tim Krabbé noted in The Rider, the "facts miss the heart of the matter; to give us a clear picture, the facts need a vehicle, an anecdote."

Cycling only features in the title story of this collection of short stories, but it is one of the sports which fired Riccarelli's imagination. In his afterword he talks of the 1972 World Championships, when Franco Bitossi - old crazy heart - was trumped on the line by Marino Basso:

"The face of Bitossi as he loses the World Championships by half a metre. His steady movement towards an approaching finish line on the gentle incline of the home straight in Gap. A finish line which will always be far away and will take a piece of his life, while Basso his team-mate will steal the world title."

A point about that memory is that it shows Riccarelli's taste for tragedy: it is not the victory salute of Basso that he recalls, but the look on Bitossi's face in defeat. Riccarelli is mining for tragedy in these tales, not telling stories about incredible feats. Some of the tragedy is in lives cut short, some in careers that went on too long.

Guy Moll's life is a perfect tragedy: dead at twenty-four, a driver for Enzo Ferrari's Scuderia Ferrari who shone brilliantly for one season but knew only one way to drive, sliding his car through corners, and burnt up before that season's end when his car spun into a wall. In that one season - 1934 - Moll was compared to Tazio Nuvolari for the way in which he cornered and was seen as one of the greatest drivers of all time.

Nuvolari outlived him, dying in his bed in his sixties, but again it is a form of tragedy which Riccarelli turns to in telling his story. For Riccarelli, Nuvolari was a man who only knew how to race, whose life itself became a race: "Who knows what sort of life he would have had if he had remained stationary, without motor racing."

For most all of Riccarelli's heroes, sport is life. It isn't something they do which enables them to do something else, it is what they are. The Dynamo and Locomotive Kiev players of FC Start, all they wanted to do in Riccarelli's telling is to play football: "We'll go outside this factory and challenge someone to a match. Kicking a football will make us find life again, showing the people of Kiev that we are not finished yet!" And since the Kiev players only knew one way to play - to win - that meant they could not lose when ordered to play the German side Flakelf. Winning wasn't an act of heroism or symbolism - even if that is what it has become ever after - it was merely an act of being. Playing was simply an act of personal fulfilment.

In his translator's introduction Michael McDermott notes that Riccarelli's stories "are linked by nostalgia for a time before sport had become a global marketing enterprise." It is true that, in recent decades, sport has lost something, but I'm not sure it has really lost the stuff that Riccarelli's stories are wrought of. You could tell such stories today about Jose María Jiménez or Marco Pantani. You could tell them, perhaps, about living stars like Zinedine Zidane or Roy Keane. The subject matter is out there. Sport has changed, yes. But not so much as to stop those who tell its stories from still finding the alegria - the lust for life - of men like Manuel Francisco dos Santos, if they look hard enough for it.

Modern sport may well be floundering, confusing values with value, but the "simple yet profound influence that sport can have on the human condition" which Riccarelli's stories remind us of is still out there, if you look for it. Sometimes the only way to see something today is to look to the past so that you can be reminded of what is really in front of you. Riccarelli's stories may all be linked by nostalgia but they are not nostalgic for a 'better' past. They are, if anything, nostalgic for a different way of telling sporting stories.