Notes from the Bay of Biscay Desk

Share All sharing options for: Notes from the Bay of Biscay Desk

Somewhere along the way I need to find a good photo of a desk. Details, details.

Rookie of the Year

I want to start this column with kudos to our very own Jens, who has sewn up the Rookie of the Year title among the official editor staff, upon discovery that Douglas burned his eligibility sometime during the 2012 Tour de France. Still, his leadership of our Cobbles coverage was everything we hoped for, showing the promise we saw in him back when some people pegged him as little more than a knife-wielding becco killer with a grudge against Norwegians. Jens' wit, writing style and of course his knowledge were all on full display, outshone only by his ability to grind out a blogging mini-season (try it sometime -- it makes riding the cobbles seem easy). Chapeau Jens!

Moment of the Year

Staying in France here... It's a bit early, but we've got a frontrunner, IMHO. Just before Zdenek Stybar struck a fan and lost his (potential winning) position on the Carrefour de 'Arbre cobbles Sunday, he had a moment that spoke to what an unbelievable badass he is. Cancellara put in his standard big dig, and Sep Vanmarcke, who had been out front and tried to swing onto Cancellara's wheel, was seeing his elastic approach the breaking point. A full meter opened up, which as we all know means you may well never see Cancellara again. Sep was struggling to close it up before it was too late. Really folks, the difference between winning alone by two minutes and winning -- or losing -- in the velodrome by half a wheel is some minute amount of energy and determination at a moment like this.

Stybar, though, saw the danger and reacted quickly, not only putting in a proper acceleration to sew the gap up tight, but also shouldering Vanmarcke out of the way -- subtly, at least. This was cyclocross skill on the big stage: blasts of power, fearlessness, determination. Not unknown in road racing, of course, not even close. But it's very cool to see what Stybar brings to the table, now that he's got enough road miles in his legs. See this clip at about 0:40. Albertina, be sure and stop this clip no later than the 2:00 mark.

Flop of the Year

This one's tricky -- is it Alexander Serebryakov or Euskaltel? The all-round Russian threat chucked away his career last week in pretty banal fashion, getting popped for EPO from a surprise inspection on March 18. Serebryakov gets the first star in this sordid affair -- presumably this was his choice, and it makes you wonder exactly how good he was when he was cleaning up in the Tour of China last year. Or winning in Philly. Second star goes to Euskaltel, for making such horrible mistakes, but at least theirs are understandable. Serebryakov brought UCI points and an international profile, both things they needed more than Amets Txurruka (the rider they now famously told they no longer had room for) and his redundant hometown pedigree. Nine months later, Serebryakov is on "holiday" and Txurruka ... well, I don't think he got any World Tour points for winning the KOM jersey at the Vuelta al Pais Vasco last week, but he showed his value on a World Tour stage. Euskaltel, meanwhile, got no stages and no GC finish above Samuel Sanchez at #15. El ouch.

In hindsight, it might go to the French police who busted Remy Di Gregorio for trafficking... vitamins. Last July, in the middle of the Tour de France, Di Gregirio was hauled away by Marseille police with an assist from some organization called OCLAESP, who investigate doping in French sport. Apart from their desperate need for acronym surgery, OCLAESP also seems to have arrested Di Gregorio for, upon further analysis, possession of non-banned vitamins. Whether the police simply failed to catch him with the goods or whether this entire affair was a complete sham, we don't know, but if Di Gregorio follows thru with the predicted lawsuits, the answer might come then. allegedly Di Gregorio was under suspicion, but while we are all accustomed to seeing "suspicion" turn into guilt at a nearly 100% rate, in this case "suspicion" might be code for "unbelievable cluelessness."

Photos of the Year

My winner would be found from Patrick Verhoest's awesome gallery. But here's two more that sum up this great spring, courtesy of Fotoreporter Sirotti. 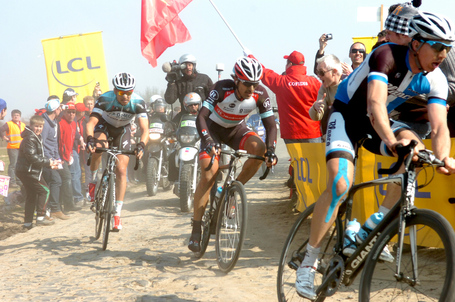 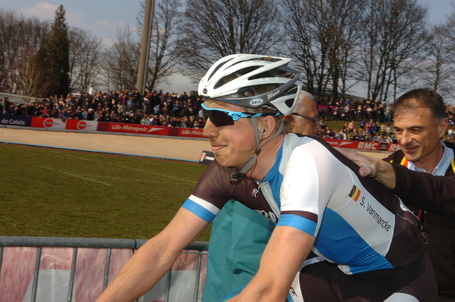 Holidays in Spain don't start too early, do they? The action stays hot and heavy with the Vuelta a Castilla y Leon starting Thursday and running thru the weekend, plus the Tour du Finistere Friday. Next week, apart from the Ardennes, the action heats up in Italy with the Giro dell'Appennino and the Giro del Trentino, which is sort of the Dauphine for the Giro d'Italia. Check out the startlist: it's loaded with Maglia Rosa hopefuls. Yes, they will likely play a lot of possum next week, but if we look for clues, they'll be visible.