Cecilie Gotaas Johnsen became a new name in the peloton last year, when she raced rounds of the NorgesCup as an individual, winning the Naerbo, Oslo and Trondheim rounds, frustrating the ambitions of Norwegian pro team, Hitec Products UCK. There was only one thing for Hitec's manager, Karl Lima, to do - sign her up! She went on to race the Tour de l'Ardèche with the Norwegian National Team, where she won the Prologue and Stage 1 - and this year she's been racing in support of Elisa Longo Borghini and Chloe Hosking's fantastic seasons - and winning the first round of the 2013 NorgesCup at Sandnes. I interviewed her just after she'd finished the Flèche Wallonne, and she told me about learning to combine racing with motherhood and a full-time job - and making the most of her opportunities.

Share All sharing options for: Interview: Cecilie Gotaas Johnsen - "Trying to challenge myself"

PdC: So Cecilie, this will be your first full season

Cecilie: It’s my first season in a professional team. Last season I had my first international races. But it was really fun, I was riding for a club team in Norway and I figured out, "why don’t you just try going abroad?", to really get a feel for the competition. And we started off with kermesse races in Belgium, and that went really well, usually like top 5, top 10. And we also attended this UCI race in Gooik, and that was really fun. And then I got taken onto the national team, to ride some stage races in Limousin and l’Ardèche – and in l’Ardèche of course I started winning something, and that was really, really fun.

PdC: What’s your background? How did you get into cycling?

Cecilie: That’s more like a coincidence, I would say, because cycling in Norway’s quite a small sport, so it was more for the fun of it. I used to play football, I was a football player in my early days. I always liked the challenge of competing and being part of a team.

PdC: So you started racing for fun, and here you are!

Cecilie: Yeah! Last year and this year have been amazing. You’re given so many opportunities and of course I would like to perform, not only for the results, but also for the team – that’s the most important thing, pulling the team together and performing as a team.

PdC: What were you doing before you became a professional cyclist?

Cecilie: I guess like everyone else, I’ve done some studying [Cecilie has a PhD in Chemical Engineering!] and I also have a full-time job back home, I’m a leader in a research department [for a Norwegian oil company].

PdC: I love it, because so many women riders have been really high achievers in their educational and professional fields.

Cecilie: But that’s also part of the competition, you know? You like to perform, and you like to compete.

PdC: So what do they feel, in your day job, when you take days off to come racing?

Cecilie: They encourage me to do this, because there’s an opportunity – it’s only a short period of your life, compared to how long you’re going to be working, so I’ve gotten support in every way to do this. At least I also have a family, I have to say that. I have a son who is five.

PdC: And how does he feel about you going off to race?

Cecilie: He is kind of confused sometimes, because he doesn’t understand why I’m going travelling a lot, but since I’ve started Skyping it’s been a lot easier.

PdC: And I guess with the men, they can do that, leave their families, without thinking about it.

Cecilie: There’s a difference, I think, because I feel responsible, and of course sometimes you don’t feel like a great mum, because you’re always out there, but I have a really supportive husband as well, and that’s a necessity in Norway, to do this. 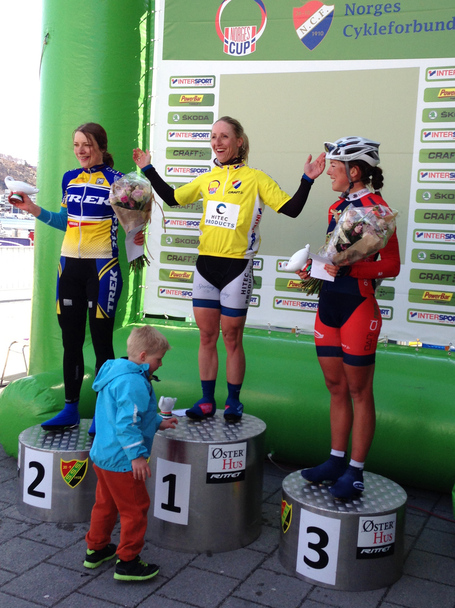 Cecilie: It’s a different aspect – they’re not only cyclists, you know? There’s a usually a lot more history behind them.

PdC: And it sounds really corny, but it inspires me to chase my own dreams, to see people….

Cecilie: capable of doing it!

Cecilie: Often there’s a question of whether it’s a big sacrifice. Of course it depends on what kind of perspective you take on, in order to evaluate that. I don’t see it as a sacrifice, I see it as a prioritisation, this is what I would like to do just now, you put your force into it. But of course, there are a lot of things that need to add up in order to achieve it. If my job wouldn’t support me, if my family wouldn’t support me, I wouldn’t be able to do this, so talking about dreams, and being able to realise them, it all depends on other factors than just yourself.

PdC: So tell me about the race, from your point of view. It was your first time racing it - how was it?

Cecilie: I knew it would be a hard race, but this is the kind of course I would like in general, because I like them hard. My task today was to be on the attacks and follow whatever, especially if Specialized or GreenEdge went. The first 45ks I was really working on it, and I was chasing one attack after another, so for me that was a good thing, because I’ve been struggling a bit, just getting used to being in the peloton and staying in the front and all this. But that’s sort of easier now, so now I can start solving tasks during the race, for the team.

PdC: Like taking the water to Rossella [Ratto, when she was having difficulties]

Cecilie: Yeah, small things like that. But I liked it! It was a bit tough, of course, first time up the Mur. That was ok, I was like "are we really going to have to go one more time on this?" [laughs] and then peloton split in pieces, but we came back again – and that was good… eventually! And it split later on as well, but I knew that both Elisa [Longo Borghini] and Rachel [Neylan] were in the front group, and that was good.

PdC: You mentioned peloton skills. Coming into the sport late, how do you learn that?

Cecilie: Good question! Many say it takes time to learn it, and I guess it does, but you need to be exposed in order to get experience. So I’ve been racing a lot of races this Spring season, in order to get a good feeling, to be exposed to it, but I also try to catch up and learn from the others, because they are experienced. So I think it’s the capability of…. trying to challenge myself, and learning to solve it, and getting the feedback from your team-mates.

PdC: What’s been the hardest thing to learn, or to adjust to?

Cecilie: One thing is getting to the front, the other thing is staying at the front! But ok, it’s getting better, and the feedback from the girls is that I’m much better than when I started, so let’s hope it continues!

Many thanks to Karl Lima for organising my trip to Flèche Wallonne with Hitec - you can read my stories and see my photo in the storystream.