Australian Adam Hansen scored the stage win of his life in Pescara today, along the Abruzzese coast, while behind him the madness of this action-packed Giro went to eleven. Going up and down over narrow, twisting country roads all day in the lower Appenine foothills, the peloton came apart at the seams as the Giro's seventh stage neared its conclusion and the action heated up. The rain then made an appearance, and another dose of I Can't Believe It's a Road Surface struck the Giro d'Italia, as rider after rider slipped and slid in wet corners, particularly on the descent back to the coastline. Vincenzo Nibali attacked at the top of the San Silvestro climb, then promptly wiped out on the descent. Numerous other riders went down... but got back up and kept racing. 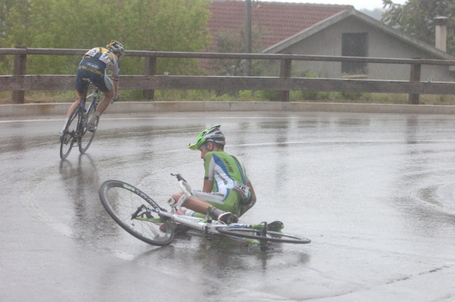 The riders hurt most by the action were the maglia rosa Luca Paolini, who lost his lead after being dropped from the lead group on the final climb, and Bradley Wiggins of Sky, the putative favorite, who struggled mightily with the dangerous conditions. Wiggins conceded 1.28 to his rivals heading into tomorrow's long time trial, and now the pressure is on him to produce and rejoin the leading group. 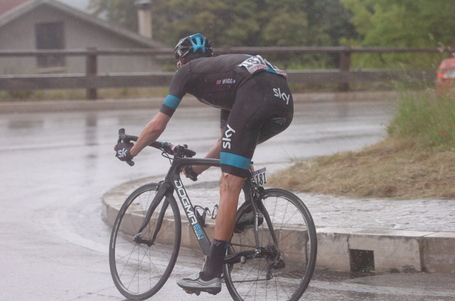 Behind Hansen, Bardiani's Enrico Battaglin won the bunch sprint ahead of the Vini Fantini duo Danilo Di Luca and Mauro Santambrogio, and including Movistar's Benat Intxausti, Garmin-Sharp's Ryder Hesjedal, Lampre's Michele Scarponi, Blanco's entire leadership, and Nibali, all 1.07 back of the winner. Wiggins was struggling to stay with this group even before the nightmarish descent ensued, and he proceeded to tiptoe his way down to Pescara, conceding precious seconds as he went.

Intxausti, looking like a true podium threat, inherited the maglia rosa with Nibali a mere 5" in arrears, with Sky's Rigoberto Uran sagging back to help (or suffer with) Wiggins. Nibali's aggression didn't cost him, and he now sits exactly where he wanted to be. His helpers Tanel Kangert and Fabio Aru had eventful days, the former on the attack til the cRaZy happened, and the latter falling while defending his captain and his hold on the white jersey. That didn't work, alas.