Giro d'Italia: On the Scene at Les Granges du Galibier for Stage 15

Despite fresh snow and an iffy weather forecast, the Giro's Galibier stage in the French Alps went on (almost) as planned.

Share All sharing options for: Giro d'Italia: On the Scene at Les Granges du Galibier for Stage 15

It wasn't until after the post-stage press conference the night before in Bardonecchia that the official word finally went out: the Galibier stage was on! Shortened by just four kilometers, the stage dedicated to the memory of Marco Pantani would climb to the Pantani monument at Les Granges du Galibier, 2295 meters above sea level.

It was an easy drive from Bardonecchia to the stage headquarters in Valloire, at the base of the Galibier climb. I arrived in plenty of time for a nice lunch before heading up to the finish on the press shuttle. I could tell I was in France because (a) the bread was good, and (b) the cafe's bathroom was down a winding staircase in the basement.

After lunch I ran into a couple of Italian newspaper journalists having a coffee in another cafe, and I asked them about the navetta (shuttle) to the finish area. They weren't going up, and they warned me that if I went up, it might be a long time before I could come back down. When I said I would probably not be down in time for the press conference, they laughed and said I might not be down until the next day.

Undeterred, I climbed onto the shuttle with a bunch of other crazy photographers (though not nearly as many as there are at most stage finshes), and we were off. We took a large bus about half way up, then transferred to vans for last 5 kilometers or so of the trip.

With the road closed to both non-official vehicles and cyclists, it was like a Giro stage finish on the moon. Nothing but mountains, and snow, and the Giro. 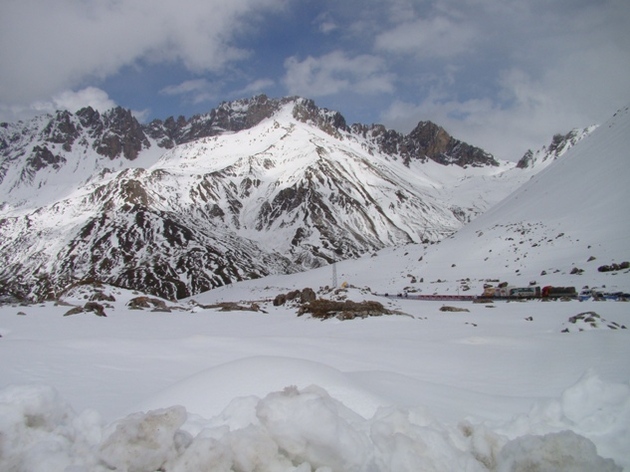 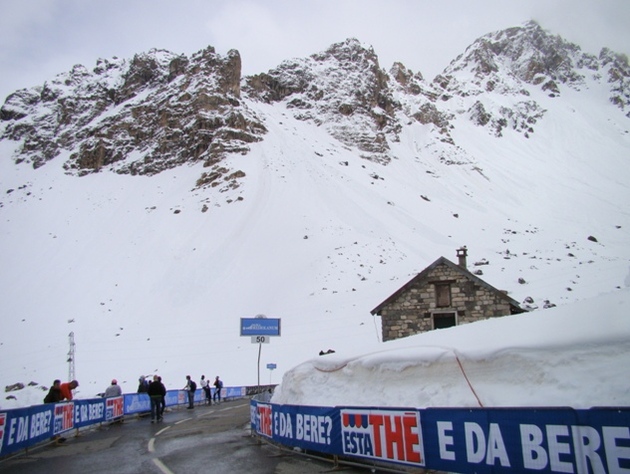 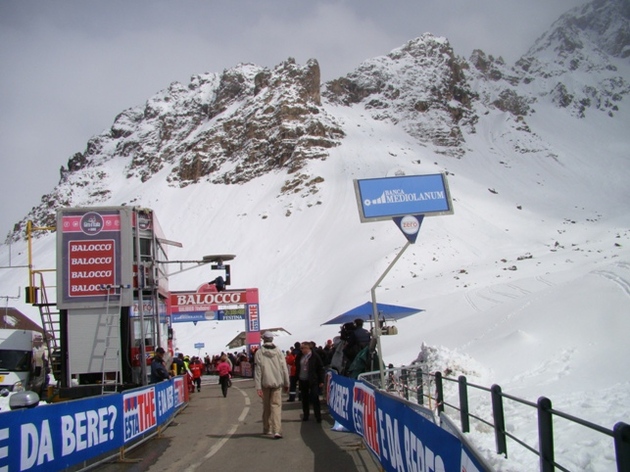 Despite the smaller crowd of photographers at the finish, chaos ensued when Visconti crossed the line for the stage win. And for once, it wasn't our fault!

Although the soigneurs were supposed to stay back behind the photographers, two Movistar swannies ran right up to the finish line and embraced Visconti, basically pulling him off his bike and leaving it lying on the road. That stopped the team car, and created a traffic jam right at the finish line, with other riders, not to mention dozens of cars and motorcycles, fast approaching. 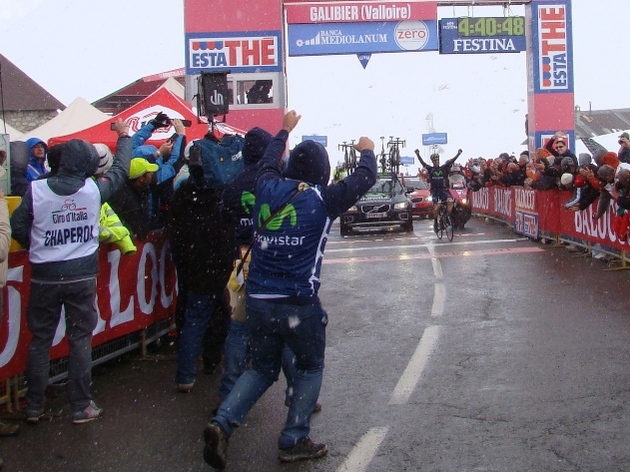 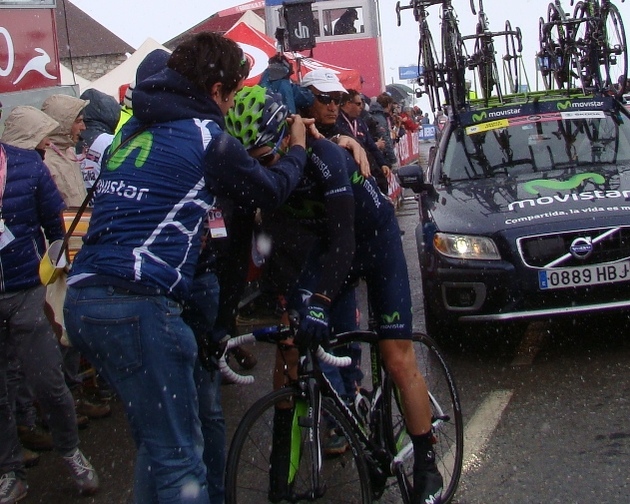 In the bedlam that followed, I completely missed the next few riders' finishes, but with much shouting, shoving, and blowing of whistles, order -- or at least, what passes for order at a Giro mountain stage finish -- was restored by the time i big finished, 54 seconds after Visconti. 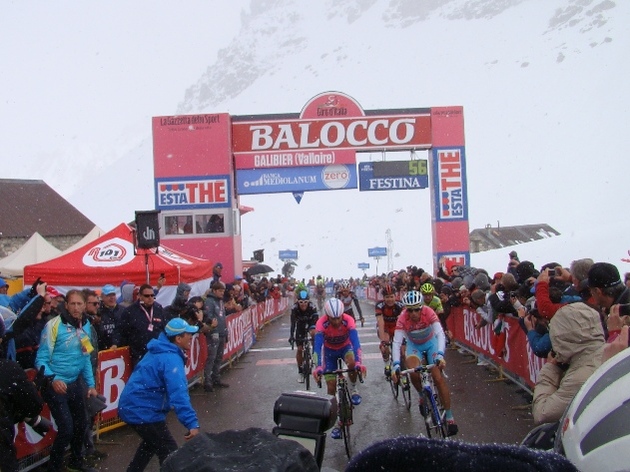 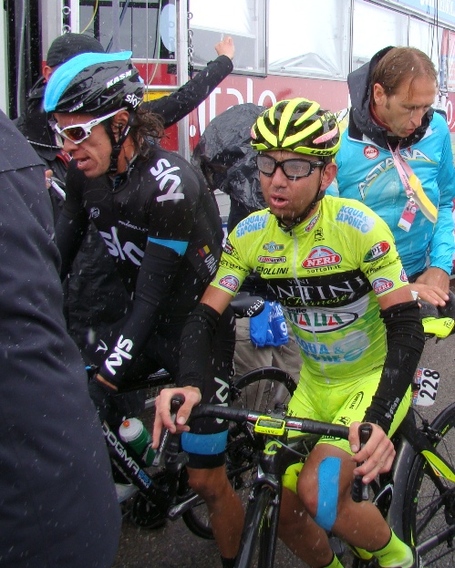 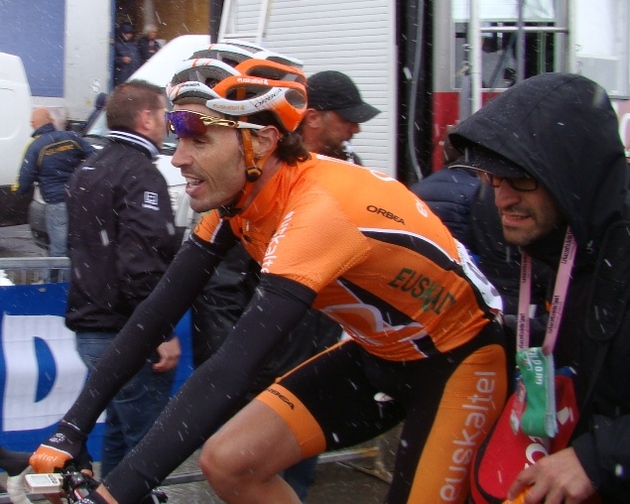 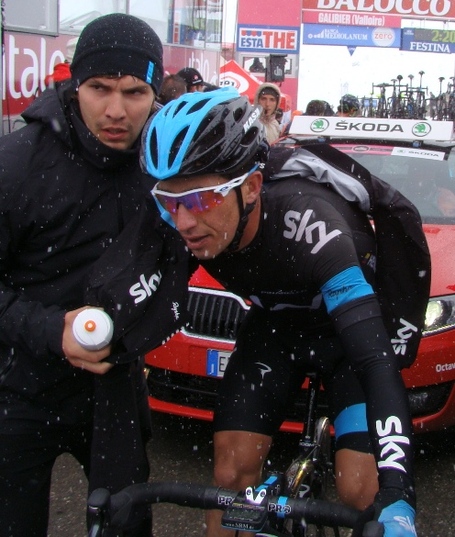 Cadel Evans was all bundled up, but he still looked cold as he started the ride down to the team buses. 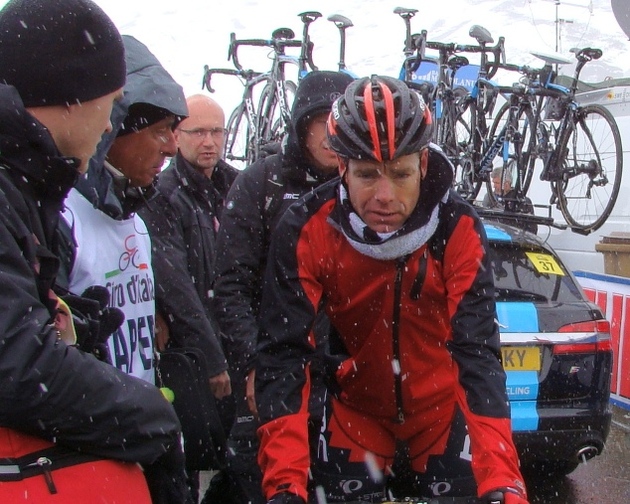 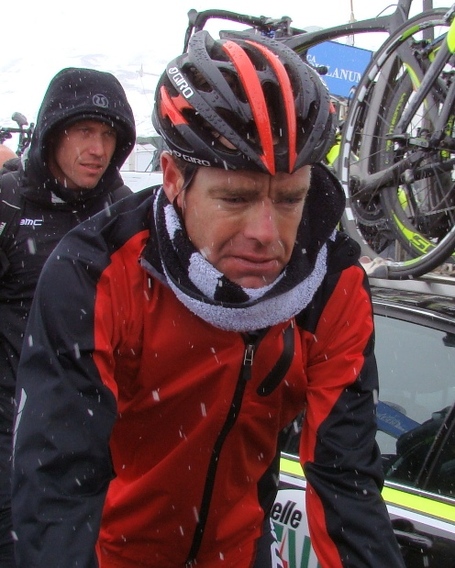 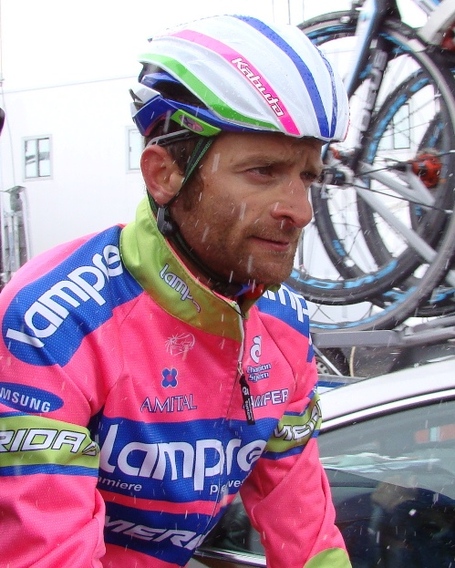 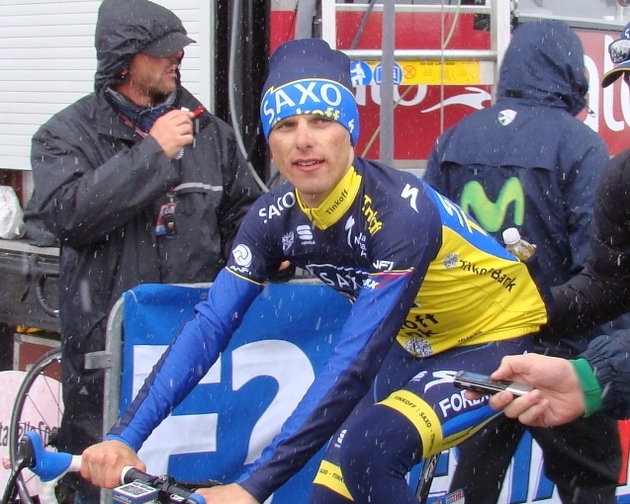 The gruppetto's suffering in the cold and snow lasted 27 minutes and 54 seconds longer than Visconti's did. 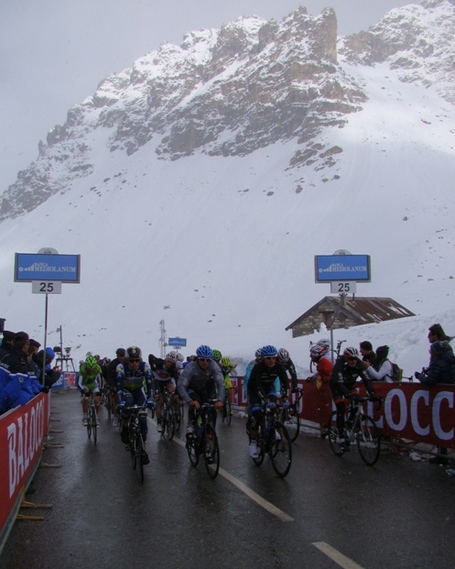 p.s., I didn't get many usable photos in the gruesome conditions at Bardonecchia-Jafferau so I'm not doing a post from that stage, but I wanted to share this, the best Giro individual stage poster I've seen. I was happy to find that they had them for sale at the tourist office. 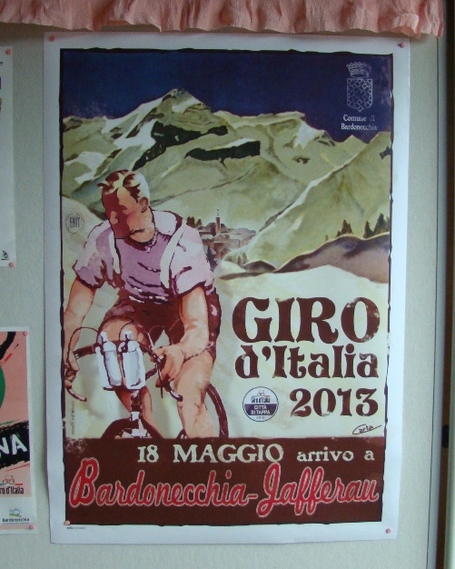