Notes from the Italy Desk

It was a grande Giro, in ways that emphasize, over and over, how unique this race really is.

Share All sharing options for: Notes from the Italy Desk

In the end the 2013 Giro d'Italia went out not with a bang, but a whimper. Then a bang. Or really, it was more of a bang-bang-bang-whimper-whimper-bang-Megwhimper-BANG! Because grand tours are like that. [Sorry I missed the weekend, but hey, these things are recorded, right?]

In looking back at the Giro, the theme was chaos. Chaotic racing that disadvantaged riders (like Wiggins) who thrive on control. Chaotic weather, in a general waddyagonnado? sense as well as in the more significant sense: the Giro is the only grand tour that tempts fate at the high altitudes, probing the fine line between greatness and catastrophe. It seems like we get these cycles where the Giro stays below 2000 meters, to avoid picking a fight with Mother Nature, for a few years, before the temptation to go over the Stelvio becomes too much to bear. We can and should all lament the day when the Stelvio stage gets cut, but accept that this is inevitably part of the Giro. The alternative is... well, infinite combinations of almost equally awesome climbing. But cycling thrives on riders doing things they're not supposed to be able to do, so the urge to go over the Stelvio in may will never die; it will only go into remission for a bit.

What do we think we will remember five years from now about this Giro?

This has been a recurring theme all season, but it's reached a new pinnacle when Rigoberto Uran became the first of his countrymen to gain the podium of the Giro. [Two other GT high points: Fabio Parra was third in the Tour de France; Luis Herrera won the Vuelta.] Uran overcame Cadel Evans of BMC in the ride to Tre Cime di Lavaredo Saturday, when he completed a trio of Colombians, along with Carlos Betancur (5th overall) and Fabio Duarte as the nearest competition to overall winner Vincenzo Nibali. Darwin Atapuma had also enlivened the stage for much of the final climb. In the final general classification there were six Colombians in the top 28. There were seven Italians.

Speaking generally, for riders of this pedigree -- not so much Colombian but young climbers, in a distant hemisphere -- to achieve so much success in a three week event is stunning. Maybe someone can do the math here, but is there any precedent for so many riders from another country doing this well in a grand tour? I suspect there are years when the Tour has been overwhelmed by Spaniards or something a little less challenging than trekking overseas from the other side of the Earth. That so many of them were good in week three speaks to the ability of these riders to handle the chaos and the weather. That might not be a coincidence. I don't know Colombian racing but I'd guess it has its share of nuttiness (cycling, yo!) and when your capital city is only slightly lower than the Stelvio, you presumably learn to roll with the weather changes.

As to the individuals, Uran moves to the head of the class with this result, and looks like a guy who can win a grand tour today, albeit with more support and an absence of stars like Nibali and Contador. Not ready to proclaim him yellow jersey material yet, if ever. Betancur, meanwhile, looks at 23 like a guy with greater star potential, if he can get to know his time trial bike a little better. And Quintana, who actually does know his time trial bike, and slightly younger than Betancur, might yet be the best of the lot. But I've gone on about that subject enough already.

True or not, Mark Cavendish is viewed as a somewhat temperamental sprinter-type, a guy who has often had a lot of help in the final KM as well as early on in stages, and often disappears when that help is lacking. His Sagan-ing in the 2012 Tour is largely responsible for that perception. So it was something to see him take home the points prize in this, of all Giri d'Italia. Cav now joins Eddy Merckx, Djamolidine Abdujaparov, Laurent Jalabert and Alessandro Petacchi as the only riders in history to win the points competition in all three grand tours. So can we stop talking about how temperamental he is?

Probably not. His survival in this race was enhanced by the peloton agreeing to ride slowly en route to the Galibier, and by the cancellation/decapitation of the two queen stages. But he did gut it out, which is more than we can say for plenty of others. 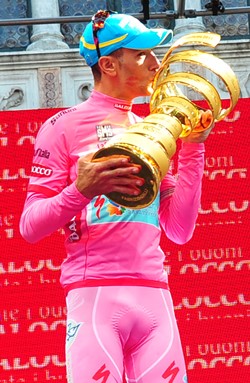 Has Nibali moved into the pantheon of present-day cycling greats? (Edited; I certainly am not comparing him to Anquetil and Merckx just yet.) Statistically speaking, a Giro-Vuelta career puts him in the same rarified air as... Denis Menchov, but Nibali has a long way to go and a strong pedigree. Could he win the Tour? Absolutely -- he was third last time; his window will be open longer than those of Wiggins and Contador, and I wouldn't just give the next several Tours to Froome and the Colombians (or Tejay). Nibali is in with a chance, for sure.

But cycling stature is more than numbers, luckily for Nibs, because Nibali brings an element of aggression that stands out. We all know about his descending skills, which are tremendously entertaining, but I personally love seeing him go deep, Evans-style, defying conventional wisdom about his limitations (which aren't great, but he's not the total package either). Nibali rides like a guy who's strong in the head, attacking in the classics as well as the stage races, going ultra-deep without blowing himself up, and winning stages like the last two mountain stages when Giro convention called upon the maglia rosa to earn the title. In my opinion he has the heart of a patron -- but not the legs, which makes watching him all the more intriguing. [That he's outwardly a clean sport advocate... well, that doesn't hurt. I'll leave it at that.]

Giro director Michele Acquarone, he of the active Twitter account and global perspective, must be of two minds about the all-too-predictable scandal surrounding Danilo Di Luca, hauled away from the race in a scene straight out of Marco Pantani's Big Book of Cautionary Tales. I of course was among the "he's clean now; nobody is that stupid" camp, so to the 99% of fandom who were waiting for a centrifuge to fall out of his vest, chapeau. Acquarone, of course, was undoubtedly mortified when they knocked on his door to give him a heads-up. But maybe he comes away with a bit more power over who rides this race.

Backing up, Italian cycling is afflicted with the same maddening ambiguity that infects the rest of Italian justice, namely a rash of cases that end inconclusively. Di Luca was dinged once in the Oil for Drugs scandal with a three month ban. Later, when caught with CERA in his system, he got a proper suspension, which was reduced to nine months. His presence, it seems in hindsight, was viewed as a sick joke by most of the riders, and as a plague by his team. So why was he there at all? Because nobody said no.

Perhaps Acquarone could have said no, but declined. A mistake unlikely to be repeated. Or perhaps he felt compelled to accept the team as it was registered. If so, Di Luca's embarrassing exit should give him the power to veto riders in the future, at least under extreme circumstances like this. At best, this whole mess should wake Italian cycling up to the damaging effects of this constant ambiguity, and to the fact that the rest of the cycling world doesn't have any patience for this brand of justice.

One last, happier note: the Italy Desk relies on various sources and their assigned gnomes for stories. The Desk's favorite discovery is how "team" and "computer" are somewhat interchangeably translated from Spanish. So you get wonderful quotes from the likes of Uran saying "My work in the Tour will work for Froome and that's what I'll do until the computer tells me otherwise." Team strategy -- there's an app for that.