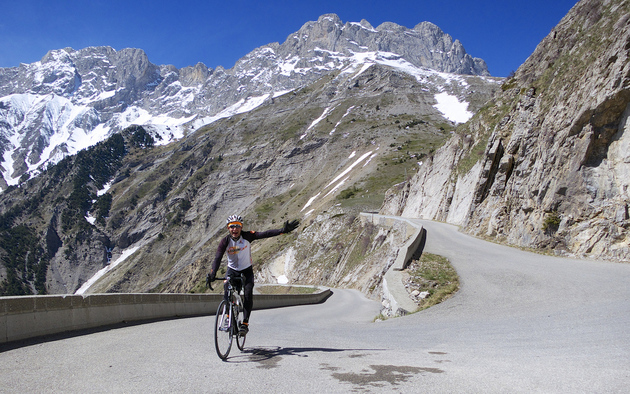 Above: Col du Noyer will be the feature climb in the "Queen Stage" #7

As usual it's a star studded field as many riders use this as key preparation for the Tour de France. While 2011, and 2012 winner Bradley Wiggins will not defend his title, Chris Froome, Alberto Contador, Joaquin Rodriguez, Pierre Rolland, Jurgen Van Den Broeck, and Andrew Talansky are among the Tour favourites scheduled to compete.

The Critérium du Dauphiné has been held since 1947. Originally organized by the regional newspaper the Dauphiné Libéré, the race was purchased by ASO (owners of the Tour de France) in 2010. Since, in an attempt to lure Tour contenders - versus riding the Tour de Suisse - recent courses have featured a stage that previews some aspect of the Tour de France.

This year, the Alpe d'Huez-Col de Sarenne double will appear in both races. Eight riders have won the Dauphiné and the Tour in the same year.

Television: France 3 will be broadcasting live. It looks like Eurosport will have some live, but mostly delayed evening coverage due to the French Open. As usual go to Steephill.tv for other viewing options.

It's a very hilly course, but not ridiculously so. Still, sprinters will have to earn their chances as even the easiest stages have some minor challenges to negotiate. The route covers a huge amount of territory from Switzerland to the Jura mountains to the far south Alps. Should be a lot of fun. Below, let's take a quick look at each stage.

As usual the UCI family demands its taste. This stage starts and ends in the picturesque Swiss ski station of Champéry - just down the road from Aigle.

Mid-stage, the route will enter and exit France, climbing both sides of the Pas de Morgin - the summit is the border between the two countries (the Swiss side was climbed in the recent Tour de Romandie). While in France, a quick loop through the Abondonce valley (cheese country!) including the sharp side of the shortish but steep Col du Corbier. Back into Switzerland, it's an uphill but not terribly steep finish. 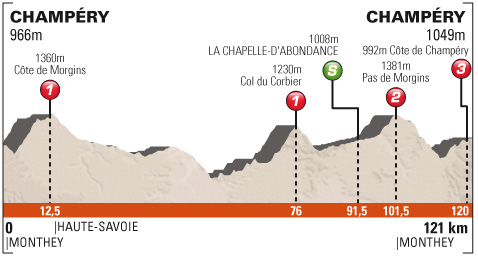 For the tourists: Champéry is one of 12 linked ski stations that make up the Portes du Soleil ski domaine (7 French, 5 Swiss). So you can start skiing in Champéry, Switzerland, and visit France (eg. Avoriaz) by chairlift.

The route will exit the alps of Haute Savoie, pass near Will's house and enter the Jura mountains in the department of l'Ain.

Sort of a mini Giro stage? Bumpy but not terribly difficult, with a couple of challenges near the end. Unclear if the sprinters can make it to the finish. 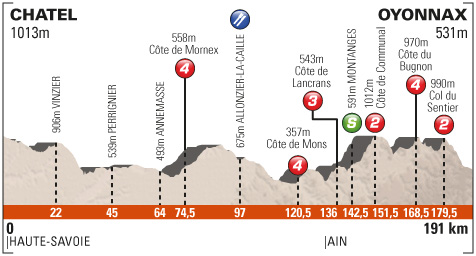 For the Tourists: During WW2, the French resistance was very active here ... little monuments and graves are everywhere. Oyonnax is just one of 17 villages in France to receive the Médaille de la Resistance.

Stage 3 - Flat with a kicker

Probably a sprinter's day? But again a little "fun" before the finish will make this stage worth watching. Col des Sauvages = Pass of the Savages? 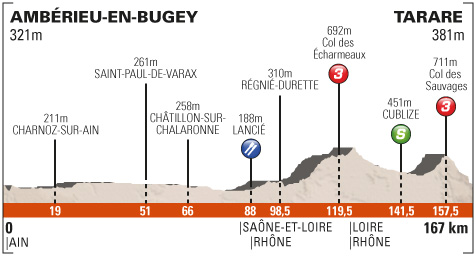 A completely flat 32 kilometre time trial in the Dombes: land of a thousand lakes (to see what I mean, take a look at the route map here).

For the Tourists: Most of lakes in the Dombes region are man made, many dating from the 15th century. Notorious for its sickly population (est. 80% with malaria), in 1850 a concerted effort, led by Trappist Monks, was made to drain and forest the region. By 1870 average life span had increased from 25 to 35.

The stage will finish at the gigantic Parc Oiseaux (Bird Park) - home to 3,000 species from five continents -- official site here.

Back to the Alps, another medium mountain stage with a not-too-steep uphill finish at Valmorel ski station. 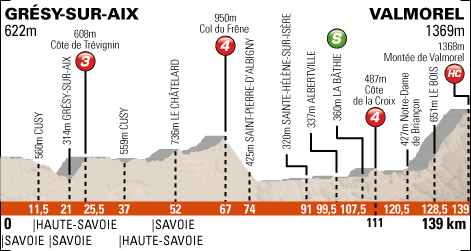 For the Tourists: Valmorel is in the valley parallel and just south of the north side of Col de la Madeleine.
Blog Post: Valmorel

Nearby are lots of huge cycling climbs including the 38 km climb to Val Thorens, the highest ski resort in Europe.

Stage 6 - Now or Never for the Sprinters 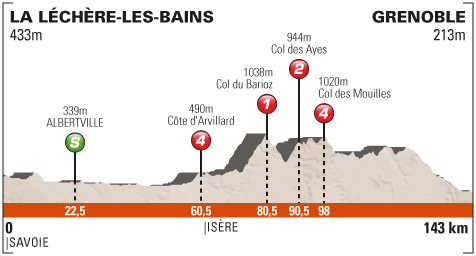 Another stage that looks like it could be a sprint finish .... but again they'll have to earn their chance negotiating a few "bumps" mid course. An attractive route with big mountains on the riders left side all stage.

A serious stage. The route slowly rises from the get-go. We will likely not see the early ascent of Alpe d'Huez and the easier side of the remote and majestic Col de Sarenne, but the Tour de France contenders will appreciate the preview. 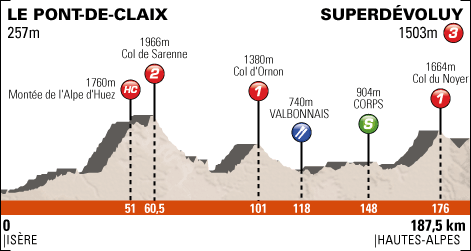 The peloton will leave the Oisans via Col d'Ornon heading towards the Hautes-Alpes region. Blog Post: Alpe d'Huez & Col d'Ornon

After negotiating part of the Route Napoléon, next is the beautiful Col du Noyer, recently appearing as the cover photo on Le Cycle's magazine's special edition of the 50 most beautiful climbs in France. The last two kilometres are steep (especially the second last km) with long stretches in the 11-13% range.

Below: just below the summit of Col du Noyer: 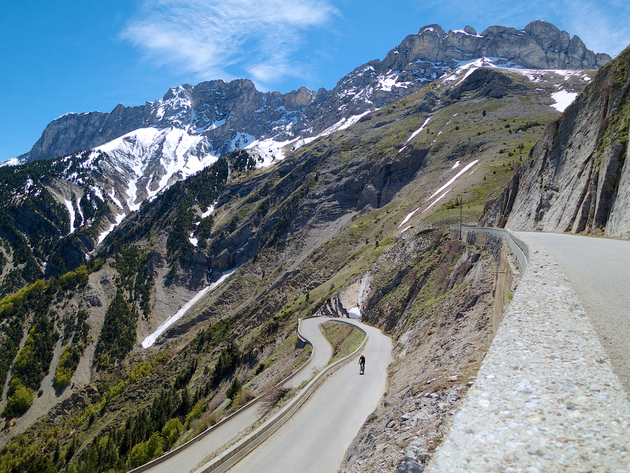 Noyer has appeared 4 times in the Tour de France, recently climbing the other side in 2010, so the surface of this narrow road is excellent. After a fast, not-too-technical descent, the race will finish with a 3 kilometre climb to the ski station of Superdévoluy (inevitably if a French town starts with "super" it is a ski station - think Superbagnères).

This 3 kilometre ramp is on a wide, modern road. Not steep, generally 5 or 6%.

For the Tourists: While you may see some Tour de France road paint, much of the graffiti is locals protesting the reintroduction of wolves. Sheep are guarded by fairly ferocious large dogs that will aggressively charge anyone approaching a herd. Stay still, they will sniff you and then leave you alone .... but stay still.

This Dauphine will cover a lot of territory. Now deep in the Hautes-Alpes this will be yet another uphill ski station finish. A tough stage, Col de Vars is a big climb (the highest in the race), but the riders will be grateful that the route doesn't turn right at Jausiers - as it leads up to the highest road in France - Cime de la Bonette (2802m). 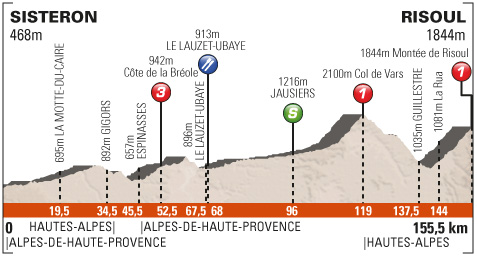 For the Tourists: Col de Vars has appeared 33 times in the Tour de France, but has fallen from favour recently - only appearing 3 times since 1975. It appeared 6 consecutives years from 1922 often as part of the famed "trilogie du sud" - Col d'Allos, Col de Vars, and Col d'Izoard. Champions such as Bartali, Coppi, Robic Bobet, Kübler, Gaul, etc. have succeeded here.

I think this is a great course. Plenty of mountains, but few crazy climb-fests. These are generally medium sized climbs. Sprinters will have to earn their chances, and most may just head to Grenoble airport after stage 6.

From a fans point of view, lots of serious stars trying to optimise their Tour preparation - and lots of beautiful mountain scenery.

Your pick? Feel free to use the comments for some FSA-DS Smack talk.