On Saturday night I raced in front of thousands of people, and it was awesome. For those not in the know, the IG London Nocturne is a massive deal in the UK cycling calendar. It’s an evening of racing around Smithfield Market in the heart of the city, culminating in women’s and men’s elite crits featuring some of the best known names in British, and indeed world, racing. Prior to the elite races, packed with Olympic and world champions (plus Giro stage winners/top ten finishers/maglia rosa holders…there will be more of that later I can assure you), there is a series of races for lesser mortals, ranging from the pure fun to the pretty serious. The evening, for example, kicks off with an urban cyclocross race designed for people without racing licenses (this made me a little crestfallen as I’d rather like to have done it), followed by folding bikes races complete with Le Mans start, and a penny farthing race which to my eyes looks utterly petrifying. After this there is the Leigh Day Kermesse, a high quality amateur affair where the cream of the non-elites battle it out (looked pretty darn fast out there to me), a hotly contested track bike criterium, and two team races, one for City of London corporate teams and one for women who aren’t elite. I was in the latter.

I answered a plea on Twitter from the organisers who needed a couple more women to complete a team and never really expected to be snapped up, but so I was, along with my CX friend Sue, with whom I’d got a nice silver medal in the Eastern Region CX Team Championships earlier in the year (that's her in front of me). We hoped lightning might strike twice. In reality though, the pair of us spent the couple of days before in a state of terror; we really didn’t have much clue what we’d let ourselves in for, apart from the fact that there would be a massive crowd and that sucking would be highly embarrassing. Adding to my nerves was the fact that the Smithfield circuit is littered with nasty corners. Corners are my downfall in circuit races. As a beginner roadie I just haven’t figured out cornering in a bunch and have been continually spat out the back on similar courses as a result. I’d had a simply dreadful race at Hog Hill (for those that know it) the previous week where I’d got dropped by a field of eleven basically because I couldn’t corner, and wanted the ground to swallow me up. When I arrived and eventually, after much faffing over getting the necessary access credentials to be allowed into the middle of the course to sign on, found my other two team mates, I was delighted to discover that one of them was the very lovely experienced racer who had been so nice and encouraging to me over my epic disintegration the previous weekend! Small world. So, we acquired jerseys (we were riding for Rouleur magazine, who incidentally had clearly not bargained on me being Basque climber sized and provided me with a garment which flapped in the wind in a most un-pro fashion), attached timing chips to bikes and headed out to warm up. Team Rouleur, Tiffany, Sue, Tracey and Rachel, were on the course in front of banks of people! Only a year ago I’d never have thought I’d have the guts to do this on a road bike. I couldn’t stop grinning.

The premise of this race was rather different from that of a normal crit as it was a team race, rather like the Tour Series races we have in the UK. The overall result was determined by the third placed rider on each team, meaning that you couldn’t let more than one of your riders get distanced. It’s a bit like high speed chess as you look out for yourself in the bunch and also keep an eye on your team mates while yelling signals and working together to get rid of riders from other teams. I can’t describe how exciting it was sitting on the startline waiting to unleash myself with all the people and cameras poised around us, or how thrilling it was as people cheered when the flag dropped. I felt like a pro in a world tour race, as if I was part of a very big deal. The pace was hot from the word go and I scrapped so hard round the evil bottom corners to stay in touch with the front, and I did, pretty much. Maybe this would be ok! Pretty soon the speed of the Rapha Condor girls (including an ex pro and a top UK CX rider) got a little too much to handle and things started to split up. Tracey managed to stick with them but the other three of us formed into a group behind, with the fourth Rapha, ahead of a further bigger group. The three of us got into a great rhythm and rode it as a team time trial, taking pulls in turn to try and stay away from the group behind. When I allowed myself to stop concentrating on the wheel in front, or the turn ahead for the odd few seconds, I just revelled in the noise of the crowd. I even heard people calling my name. This was just a wonderful experience to savour. This status quo remained for the rest of the race. We never could shed the fourth Rapha, who clung onto us like a limpet, but on the final lap we went for it. High speed into the final turn, with me sitting third wheel, I launched with about 100m to go and took the sprint from our group for 9th, with the Sue and Rachel 10th and 11th and the Rapha a second behind us. I’ve never experienced such a sporting thrill as that sprint. It may have been for 9th in a women’s not-even-top-level race, but with the atmosphere and the din of the crowd, and the commentary over the tannoy, on the drops, teeth gritted and pedalling for all I was worth it felt like I was winning Milan Sanremo. Last weekend at Hog Hill I considered giving up on road racing. This weekend I couldn’t stop buzzing with the delight of it all. We had no clue where we’d come as a team but we were very pleased when told we had third, behind the unbeatable Rapha galacticos and the strong Wiggle-DHB girls who were much more experienced than us. We’d dropped the whole Mule Bar team, which amazed us. Tracey was 5th, having stuck with the big guns all the way. So, 9th of 22 riders for me, 3rd out of 6 teams. It might not sound much but expecting anything much better would have been a big stretch and I was so happy to have exorcised the demons of Hog Hill. I’d proved I could actually ride a bike. 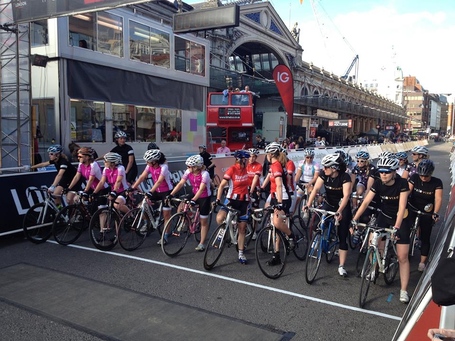 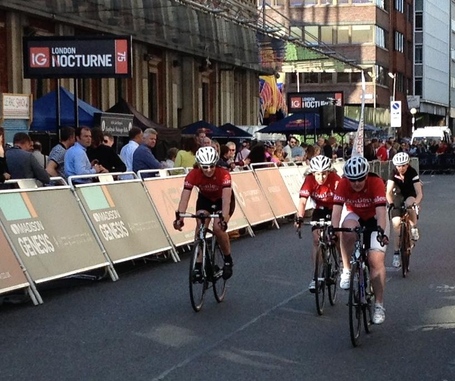 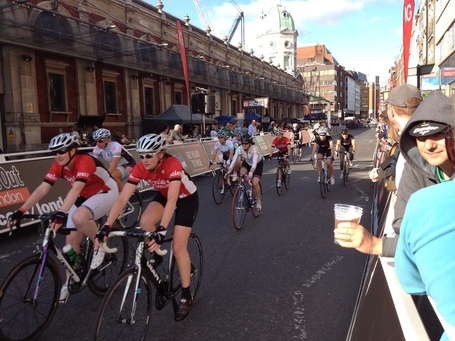 So then, on with the second part of the evening. As we were racing for sponsors’ teams we got free VIP hospitality for the rest of the evening. This involved beer, food and a prime viewing spot for the elite races. When you’re on the outside of the course it’s very hard to see much unless you get there super early, but on the inside of the finishing straight, drink in hand, it was much more relaxed. Now you remember I mentioned in my first paragraph the presence of a Giro star in the field? Yes, I kid you not, Benat Intxausti was in London! I simply couldn’t believe my luck when it was announced he would be coming, accompanying his British BFF and teamie Alex Dowsett. Benat in London? Surreal. Having been nervous about racing earlier in the evening I was now terribly nervous of blowing my chance. Imagine my excitement when I spotted someone thinner than Dowsett in navy and green while queuing for my dinner! Dinner abandoned, I ran. He did look a tad confused as I raced at him but clearly happy to be deemed worthy of approach (most people were more interested in Dowsett). I told him I was his Biggest British Fan, which he understood after the second time of trying (his English is not great) and then I produced from my bag the flag I had decorated in his honour, which he was very pleased with. We posed for this little picture: 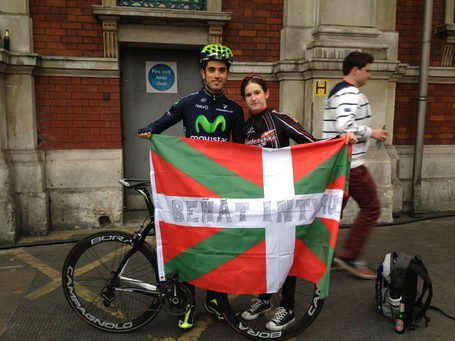 Then he asked me about my jersey, which I got from a shop in Gernika, pretty near where he lives, and he seemed pleased I knew the area. I told him I’d been there during the Vuelta. It was all very amiable, despite the language barrier (massive Basque fail on my part as I was too star struck). He seems a delightful guy. Then off he went to do his official stuff while I grinned like a loon.

The elite races themselves were both very exciting. The women’s field must have been the best ever assembled in the UK. Wiggle Honda brought not only Olympic champs Trott, King and Rowsell but also Rochelle Gilmore, Lauren Kitchen, Amy Roberts, world junior TT/senior team pursuit champ Elinor Barker, and Charlotte Becker. Then there was Helen Wyman, Emma Trott (no big deal, I raced her in my first ever road race..haha!), Lucy Garner, Coryn Rivera and multiple national crit champ Hannah Barnes along with the cream of UK talent. Laura Trott won from Barnes and King in an incredibly fast and furious race with a very exciting sprint. Inspiring and also a little demoralising. I wasn’t going that fast. The men’s race took longer to break up, largely because there wasn’t one dominant team. Tom Scully of Raleigh won the slightly chaotic bunch sprint from Dowsett, who’d tried to escape numerous times, and Dean Downing. Benat was middling. I don’t suppose crit racing is really his bag; they barely even have them where he comes from, whereas every young rider does them week in week out in the UK. He was also a little sick; I was aghast with fear that he might not come when he proclaimed on Twitter that he was on antibiotics, but he seemed to enjoy the experience. I rolled home to bed later than was ideal and then got up early for what turned out to be a mind-blowingly fast club run. Perhaps not the best idea, but what was I supposed to do the morning after the night before but ride my bike?

All the results are here, along with more photos and a nice video

(Race photos are by my club mates Jon and Richard)