Share All sharing options for: The Tour de France Miscellany, by John White 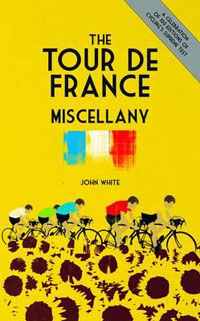 Every Summer, over the course of the three weeks of the Tour de France, cycling fans around the world suffer the same problem. Friends, work colleagues, family members - even strangers in the street who see you wearing lycra - will try and engage you in conversation and ask you all sorts of silly questions. "Cav has won ninety-four stages already this year but isn't winning the race? That seems as unfair as the voting in the Eurovision!" A punch on the nose tending to cause offence - as does, sadly, hitting them round the ear with a rolled-up newspaper - why not use John White's Tour de France Miscellany? No, not to hit them with, but to let them bugger off and read, leaving you in peace while they learn about the Tour themselves?

White's Miscellany is your bog-standard Tour early learner It's Schott's Miscellany for cyclists. It's the Dummies Guide to Le Tour, the Bluffer's Guide to the Big Buckle, the Blagger's Guide to the Tour de France. Throw a newly minted cycling fan in at the deep end of one of the Serge Laget books and they'll probably drown and discover triathlons, give them something like White's Miscellany and, who knows, within three years they too could be reading Sweat of the Gods.

Flipping through the book at random, here's a sample of some of White's chosen factoids:

"In 1987, Stephen Roche (Ireland) won the Giro d'Italia, the Tour de France and the World Road Cycling Championship. Amazingly only one other rider in the history of the sport, Eddy Merckx, has been able to win this coveted hat-trick in one year."

"In 1910, Adolphe Hélière (France) drowned on the French Riviera during a Tour rest day."

"Prior to stage 10 of the 1957 Tour de France, Federico Bahamontes (Spain) threw his shoes down a ravine and quit the race. The previous year he had thrown his bike down a ravine before quitting the Tour."

The more meatier facts include: lists of yellow, green, polka-dot and white jersey winners; capsule biographies of Fausto Coppi, Louison Bobet, Jacques Anquetil, Eddy Merckx, Bernard Thévenet, Bernard Hinault, Greg LeMond, Miguel Induráin, Lance Armstrong and Bradley Wiggins; a list of riders' nicknames (is Wiggo really known as the Banana with the Sideburns?); lexicons of Tour/cycling words and phrases; short pieces about l'Alpe d'Huez, the Aubisque, Izoard, Croix de Fer, Madeleine, Galibier, Lauteret, Tourmalet, Luz Ardiden and the Ventoux, including lists of the first rider over them each year; and top ten finishers in the Tours of 1903, 1910, 1919, 1949, 1955, 1964, 1969, 1978, 1998 and 2011.

Pretty much everything your friend is going to need to go from next to zero knowledge of the Tour to being capable of answering a Tour-related question on Pointless is in there and White' Miscellany offers the beginner the perfect platform to start their acquisition of Tour knowledge from. As a beginner's book, it's ideal.

Some criticisms are necessary though. As with most all Tour de France books, White's Miscellany contains one or two errors. Well, a few more than one or two actually. Being generous I'm going to say that - annoying as they are - because this is a beginner's book, they don't really matter. In fact, let's turn the vice of White's factual infelicities into a virtue. Imagine your friend has read White's Miscellany. And then come back to you and started showing off their newly acquired knowledge: "That Henri Desgrange, he was a real chancer. Didn't even show up for the start of the first Tour he was so scared it was going to be a failure." To which you can reply: "Well, actually, that's a common misconception, but he was at the start waving the riders off, and mostly he stayed in Paris because he had some big track races at one of his vélodromes coming up, the French and American sprinters Edmond Jacquelin and Major Taylor were going head to head again." Watch as your friend sways and swoons at your apparent Tour PhD status.

(As a service to Café Bookshelf regulars, email a proof or purchase - till receipt or a photograph of you/your friend holding the book - and we'll send you a list containing a dozen such corrections.)

The other criticism is with White's ordering of his information. Jean-Luc Goddard, speaking of French new wave cinema in the sixties, said that a good story should have a beginning, a middle and an end, but not necessarily in that order. White has followed that dictum and taken a non-linear - random - approach to his ordering of information. Thus, on the first page, you jump from 1903 to 2008 to 1983 to 1977 and then 1992. All well and fine until you come to a factoid like this, to be found on page eighteen:

"In 1959 André Darrigade (France) won the first stage and the first yellow jersey for the fourth successive year in the Tour de France."

Then, on page thirty-two we learn the following:

"In the 1958 Tour de France, André Darrigade won the opening stage and the yellow jersey for the third successive year."

You can already see what's coming on page eighty-nine, can't you? Yes, it's this:

"In 1957, André Darrigade won the first stage and the year's first yellow jersey for the second successive year."

That sort of reverse story telling worked a treat for Christopher Nolan in Memento and for Gaspar Noé in Irreversible, but in White's Miscellany it just looks like the elastic of one minor factoid is being stretched to breaking point. Elsewhere, the same factoid appears again and again (Lapize's "Assassins!", LeMond bing held back in the 1985 Tour, etc) If you're going to scrape the barrel by repeating factoids why not be creative and tell readers how many Geminis have won into Bordeaux down through the years? (Tour trivia really is lacking when it comes to factoids about riders' star signs.)

Overall, White's selection of factoids tends toward the dry (some are downright ossified): Jesus Loroño's win on stage ten of the 1953 Tour (from Pau to Cauterets via the Aubisque) merits a mention (the joke being "Jesus wins a stage"). Or we learn that the 2007 Tour's final stage started from Marcoussin, the home of the French rugby union team's training camp (for the 2007 rugby world cup). That's trivial, but is it really trivia?

While those criticisms are more then enough to put off anyone who's already read at least one Tour book, I'll again repeat my earlier point: White's Miscellany is an ideal beginner's book, offering the new comer to the subject a basic grounding upon which they can, if they choose, build. And all those errors, well having them in your head just makes reading Benjo Maso's Sweat of the Gods an all the more enjoyable experience when you do finally get there.