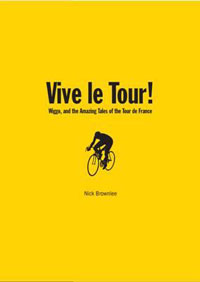 Title: Vive le Tour! Wiggo, and the Amazing Tales of the Tour de France
Author: Nick Brownlee
Publisher: Portico
Year: 2007 (updated 2010 and 2013)
Pages: 275
Order: Anova
What it is: A beginner's guide to the Tour de France
Strengths: Bite-sized chunks of information
Weaknesses: Errors and some out of date stats

Every Summer, over the course of the three weeks of the Tour de France, cycling fans around the world suffer the same problem. Friends, work colleagues, family members - even strangers in the street who see you wearing lycra - will try and engage you in conversation and ask you all sorts of silly questions. "Cav has won ninety-four stages already this year but isn't winning the race? That seems as unfair as the voting in the Eurovision!" A punch on the nose tending to cause offence - as does, sadly, hitting them round the ear with a rolled-up newspaper - why not use Nick Brownlee's Vive le Tour! - not to hit them with, but to let them bugger off, leave you in peace and learn about the Tour themselves?

Brownlee's book is your bog-standard Tour early learner. It's Schott's Miscellany for cyclists. It's the Dummies Guide to Le Tour, the Bluffer's Guide to the Big Buckle, the Blagger's Guide to the Tour de France. Throw a newly minted cycling fan in at the deep end of one of the Serge Laget books and they'll probably drown and discover triathlons, give them something like Brownlee's miscellany and who knows, within three years they too could be reading Sweat of the Gods.

Brownlee approaches the Tour in chronological sequence, running through each year and serving up fact-riddled anecdotes about that race. In addition to the year-by-year story there's brief excursions to look at the lives of Maurice Garin, Philippe Thys, Ottavio Bottecchia, Gino Bartali, Fausto Coppi, Bernard Hinault, Greg LeMond, and Lance Armstrong, and at some of the mountains of the Tour (Galibier, Ballon d'Alsace, Aubisque, Madeleine, Col de la République, Ventoux, and Tourmalet). Brownlee also serves up some nicknames and the usual statistics about most stage wins, smallest winning margins, most participations etc.

As a teenager, Joop Zoetemelk was a regional speed-skating champion in his native Holland, and there must have been times during his long cycling career when he wondered if he'd have had better luck if he'd stuck to skates instead of pedals. In terms of the Tour de France, the Dutchman would have been within his rights to consider himself cursed; after all, his career just happened to coincide with those of five-time winners Eddy Merckx and Bernard Hinault. Raymond Poulidor may have been dubbed 'The Eternal Second', but he was only runner-up twice: Zoetemelk was second no fewer than six times. When he did finally succeed in winning the race on his ninth attempt in 1980, the feat was largely dismissed because Hinault had been forced to withdraw by a knee injury.

Still, Zoetemelk remains a watchword for consistency and longevity in the sport. It has been calculated that if Tour wins count for ten points down to one for tenth place, the Dutchman would be the greatest rider in history. Indeed, between 1970 and 1982 he never finished lower that eighth. He spent a total of 22 days in yellow and won ten stages. In 1985, at the venerable age of 38, he became the oldest man to win the World Championship.

All this from a man who in 1973 was given the last rites in hospital after a horrific crash in the Midi-Libre race, then recovered only to find himself at death's door again with a bout of meningitis.

Gastone Nencini, aged 49: Chain-smoking Nencini win the King of the Mountains title in 1957 and the Tour itself in 1960. The Italian was known as a fearless descender, and was just in front of Roger Rivière on the Col du Perjuret when the Frenchman fell into a ravine while trying to keep up.

Other years, the information is more about the race than the winner, sometimes just the one gobbit of info, other times several (the more current the book gets the more gobbits of information are thrown at you. The 2006 Tour, for example, stretches to eleven entries while 2012 runs a wholly unnecessary sixteen).

Brownlee's presentation of his Tour trivia makes for an easy enough read, whether you try and read the book cover to cover or just dip in and out of as you please. Pretty much everything the friend you recommend this to is going to need in order to get from next to zero knowledge of the Tour to being capable of answering a Tour-related question on Pointless is in there. Vive le Tour! offers the beginner the perfect platform to start their acquisition of Tour knowledge from.

Some criticisms are necessary though. As with most all Tour de France books, Vive le Tour! contains one or two errors. Well, a few more than one or two actually. In the first thirty pages I was sorely tempted to throw the book away at least five times as errors came thick and fast. That said, I'm going to be kind here and excuse the inaccuracies because - annoying as they are - this is a beginner's book and they don't really matter in that context. In fact, let's turn the vice of Brownlee's factual infelicities into a virtue. Imagine your friend has read the book. And then come back to you and started showing off their newly acquired knowledge: "That Jules Banino, what a guy! Riding the Tour at 51! And getting beaten up by the peloton in 1924, and him a policeman and all! What a character!" To which you can reply: "Well actually that's a common misconception. Banino was really only 31 in 1924, people seem to have misread his date of birth - 1892 - as 1872 and saddled the guy with an extra two decades. As for getting beaten up in 1924 - that would have been very, very difficult as he'd abandoned the race more than a week earlier, on the first stage." Watch as your friend sways and swoons at your apparent Tour PhD status.

(As a service to Café Bookshelf regulars, email a proof or purchase - till receipt or a photograph of you/your friend holding the book - and we'll send you a list containing a dozen such corrections.)

The other criticism is with the updating of the book. Originally published in 2007, Vive le Tour! has had two extensions put on (in 2010 and 2013) without anyone bothering to go and look at the original architecture. The 2007 book was written in advance of the Tour en Angleterre and contains many forward-looking statements (eg "In 2007, the prologue takes place in London for the first time.") or statements that have been overtaken by events (eg "Boardman went on to wear yellow for three days [in the 1994 Tour], still the best-ever performance by a British rider alongside Scotland's David Millar in 2000.") These should have been removed or fixed in 2010. And again this year. But, for some reason, some publishers think updating a book doesn't actually mean updating a book, it just means adding on more bits at the back.

Most problematic with this attitude is the issue of Tour trivia that was true in 2007 but is no longer so. Consider, if you will, this list for the number of stage wins:

While that list may have been correct in 2007, you can see immediately what's wrong with it in 2013, can't you? Yes, it's the absence of Mark Cavendish's name. The Manx sprinter has already amassed enough stage wins since Brownlee first put his little book of Tour trivia together to render out-of-date tables like the above. With twenty-three stages to his name Cavendish should today appear on the list above the twenty-two won by André Darrigade and Lance Armstrong. Oh, hang on a minute, aren't we supposed to have taken a bottle of Typex to all stat lists that contain Armstrong's name? Oh bugger, the revisionists have really created a mess for authors of Tour de France histories, haven't they?

While those criticisms are more then enough to put off anyone who's already read at least one Tour book, I'll again repeat my earlier point: Vive le Tour! is an ideal beginner's book, offering the newcomer to the subject a basic grounding upon which they can, if they choose, build. And all those factual errors, well having them in your head just makes reading Benjo Maso's Sweat of the Gods an all the more enjoyable experience when you do finally get there.