Share All sharing options for: Mountain Kings, by Giles Belbin 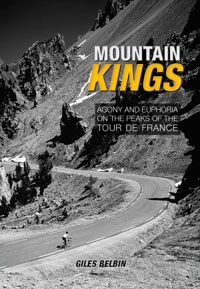 Title: Mountain Kings: Agony and Euphoria on the Peaks of the Tour de France
Author: Giles Belbin
Publisher: Punk Publishing
Year: 2013
Pages: 256
Order: Punk
What it is: Part travelogue, part guidebook to the mountains of the Tour, part a history of the race through the mountains and a score of Tour champions
Strengths: It cuts to the heart of what the Tour really means for most of us: stories.
Weaknesses: Some will question the choice of mountains, some will question the riders profiled.

There is a point made time and again about the difference between cycling and most other sports: cycling's stadia are the roads we can all ride on. The greatest stadia - the Wembleys, the Fenway Parks, the Parcs de Prince - they're the climbs from the Classics and the Grand Tours. You can't go into the Gabba and try to bowl a maiden over, but hop on your bike and you too can be grinding your way up the slopes of the Ventoux, Hautacam or l'Alpe d'Huez.

In telling the intertwined stories of men and mountains, Belbin alternates between the two, twenty-five chapters talking about the climbs, interlaced with another twenty-three chapters about the men. Belbin's selection of mountains is:

No selection of mountains ever pleases everybody and there's bound to be a climb or three someone will think should have been included or a climb or three that should have been excluded. For the most part I think Belbin has picked iconic climbs, climbs about which there are good stories to tell. So while the Col de la République isn't all that much when parked in the shadow of the Tourmalet or the Ventoux, its inclusion is merited on the grounds that so many others ignore its status as the first real mountain climbed by the Tour (and its role in the invention of the derailleur).

In presenting the mountains, Belbin offers the usual elevation profile and basic stats grimpeurs expect to find and illustrates each climb either with photos from his own ascents or pictures drawn from the archives. The presentation of Mountain Kings is actually a minor delight: the book is trade paperback size or thereabouts (nine by six inches) and the photographs have all been treated with a filter to give them a consistent look. 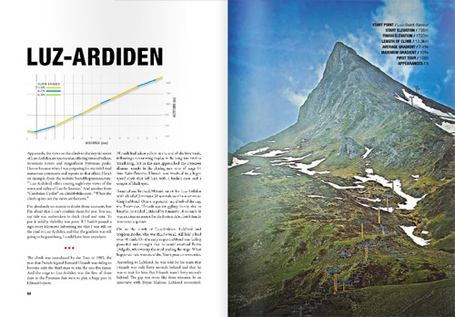 Linking the mountains and their racing history are accounts from Belbin of his own ascents of these climbs. In this regard Mountain Kings is not unlike Graeme Fife's Tour de France (or at least the original version of that before all the extensions started to get added on at the back leaving it feeling like something out of Mervin Peake's Gormenghast novels). You get a mix of the personal, the scenery and the history. Belbin has brains enough to let the personal play a minor role, leaving the scenery and the history to hog the limelight. Here's a very brief example of the personal travelogue writing, from Belbin's ascent of the Col de Joux-Plane:

"Samoëns is going through its morning routines as I make my way through the pretty town. A lorry is hoisting a communal bin high into the air and tipping it slowly; men and women in high visibility jackets are tending to the streets and paths; café owners are setting out tables and chairs, propping up menus, preparing for the day's trade. The town has an air of muted contentment. The sun is shining, there's a cooling breeze, people are smiling and chatting. Everything is very pleasant indeed. Yes, it is going to be a lovely day in Samoëns. Pity I won't be here to enjoy it."

On the history side, here we are on the Izoard, 1951, Fausto Coppi riding the Tour shortly after the death of his brother Serse:

"On the approach to the first climb of the day, the Col de Vars, Abdel-Kader Zaaf, a French national who had been born in Algeria and who would finish only one of the four Tours he started, launched a short-lived attack. With 100km or so still to ride, Coppi used the acceleration of Zaaf as a springboard. Joined by Roger Buchonnet, he headed up the road, striving to establish a gap.

"And a gap was soon established. By the top of the Vars the pair had over eight minutes on the pursuing peloton. On the slopes of the Izoard, Coppi was too strong for Buchonnet. The great Italian champion was alone through the Casse Déserte, over the top of the pass and down into Briançon, where he crossed the line over three-and-a-half minutes ahead of his initial breakaway companion. The win was enough to move him up into the top ten overall, where he would stay for the rest of the race, finishing 10th in Paris. Even in his darkest hour, Coppi had it within him to illuminate the Tour on one of its toughest days."

On the riders side of the equation, Belbin's selection is made up of: 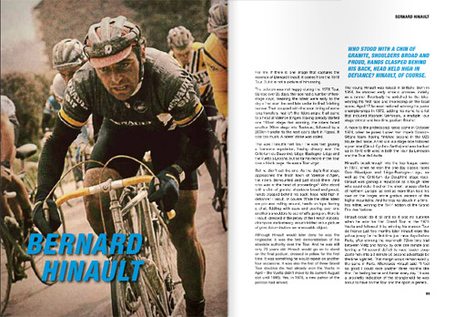 As with the inclusion of the Col de la République, Belbin is willing to challenge the accepted picture of cycling history by - for instance - noting Franco Cuaz's claims that Maurice Garin appears to have taken out French citizenship a good decade later than is normally accepted (meaning his 1897 and 1898 Paris-Roubaix wins should now have the Italian tricolour against them, not the French). The selection of riders profiled includes the usual suspects (Coppi, Anquetil, Merckx, Hinault, Induráin and Armstrong), many of the other favourites (Bartali, Bobet, Fignon, LeMond etc) but it also includes a few of the better grimpeurs who've carved their names into the sides of the Tour's mountains (Trueba, Bahamontes, Jiménez, Van Impe, Virenque, Pantani etc). As with the mountains, some will doubtlessly cry "why him and not him?" but - again, as with the mountains - Belbin's selection works because Mountain Kings is really about telling great stories from the Tour's history.

Of the rider biographies, here's a brief excerpt from the Vicente Truba one:

"In 1933, Spanish rider Vicente Trueba became the first official winner of the Tour de France's best climber classification, then called the Grand Prix de la Montagne. Small and slight, at only 1.58m (5 feet 2 inches) and 60kg (8 stones 2 pounds), Trueba was ideally suited to the high peaks of the Alps and the Pyrénées. With a terrific turn of speed that he was able to maintain far longer than his rivals, he could climb better than almost anyone, a fact well illustrated by the great Alfredo Binda, five-time winner of the Giro d'Italia, who once chose to describe his own climbing prowess in comparison to that of the Spaniard, saying: "Nobody can stop me in the mountains, not even the legendary Trueba." 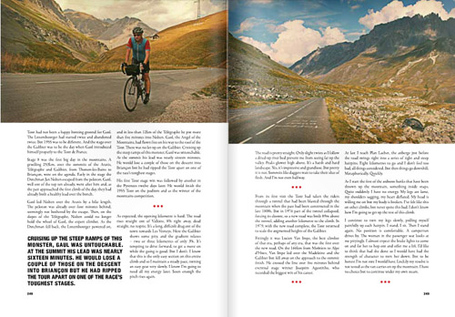 Mountain Kings doesn't strive to give you the full history of the Tour, it's not trying to be a year-by-year telling of who won what where and how. But, for me, its story-telling approach cuts to the heart of what the Tour really means for many fans. It's not about knowing whether André Darrigade won more stages than Charles Pélissier, it's not about knowing that Jean Robic won the first post-war Tour and was followed by Gino Bartali, Fausto Coppi, Ferdi Kübler, Hugh Koblet, Louison Bobet and Roger Walkowiak before Jacques Anquetil came along. It's about the things these men did to make their names remembered, it's about Anquetil and Poulidor on the Puy-de-Döme, Merckx rampaging through the Pynénées on his way to Mourenx, Coppi on his way to Sestriere. It's about stories. Having read more than a few year-by-year histories of the Tour recently Belbin's book felt fresh, came alive for me, by connecting with such stories. Whatever you've already read about the Tour, Mountain Kings makes for a great read because it understands that the Tour de France is really about telling stories.