To say that Tour de France: Official 100th Anniversary Edition is the updated version of a book originally put out in 2003 for the centenary Tour would be factually correct but misleading. As has been mentioned in other reviews, when it comes to updating cycling books many publishers think all that is required is a fresh cover and a new chapter or two at the back. Not so with Tour de France: Official 100th Anniversary Edition, which is a comprehensive re-working of the original centenary edition.

Tour de France: Official 100th Anniversary Edition tells the story of one hundred Tours in words and pictures. Typically you are talking about one page of text and one to three pages of images per Tour, with a couple of the years stretching to two pages of text. In addition to the year-by-year story there's excursions to consider the effect both wars had on the race and look at the individual jerseys. 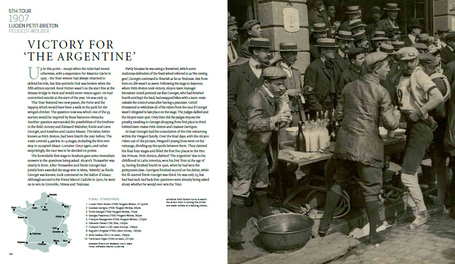 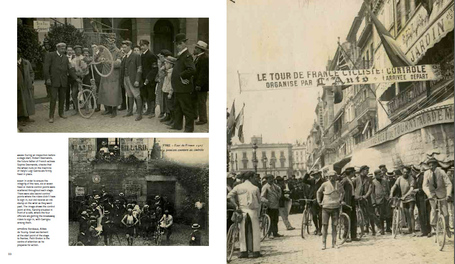 The telling of each Tour is pretty straightforward but Laget and co manage to squeeze a lot of information into five hundred words and still make the text readable. Take, as a brief example, a couple of paragraphs about the 1906 race (at which point the race was decided on points, not time):

"The 1906 race was all about climbing and, consequently, the best thing that could have happened was for it to be won by a climber. In fact, the race completely redefined what it meant to be a climber, thanks to the exploits of René Pottier. A miller who rode in a cotton sun hat, Pottier was a phenomenon on the climbs. Sent off course on the opening stage, he still managed to finish fourth, close behind winner Émile Georget at the end of a brutal test. Potholes and nails scattered by partisan fans forced 27 riders to abandon, leaving just 49 in the race.

"Wearing number 48, Pottier showed a quick eye in avoiding hazards, and consummate skill in making repairs when required. As brown and wrinkled as a currant, Pottier won the next stage to share the lead with Georget. Ahead lay the Ballon d'Alsace. It was here that Pottier came into his own. He produced an exhibition that dazzled even the most cynical race followers. He spent 220 km on his own, reaching Dijon with an advantage of 48 minutes on his protégé, Georges Passerieu. Georget was in fifth place and now four points down on Pottier."

As well as the text, each year has a thumbnail route map plus the top ten in final general classification. For the other category winners you have to turn to the back of the book where they're listed, along with stats such as wins by country and most stage wins. 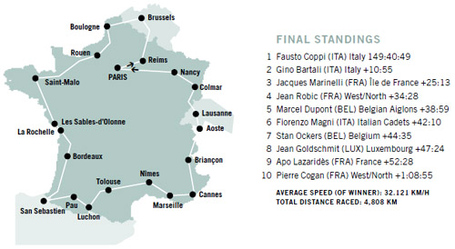 As well as the text Laget and co have chosen a broad range of images: posters, cartoons and magazine covers as well as photographs. Increasingly I find myself spending more time actually looking at old photographs - where heretofore I might just have glanced at them - noting things like the evolution of the derailleur through the 1930s and 1940s, or the way the HD logo on the yellow jersey appeared after the war, bounced around from breast to shoulder and back before disappearing for two decades, only reappearing in 2003. There is a tendency to dismiss photo-based cycling books as something for the coffee-table, eye candy, but the truth is that, with a well chosen selection of photographs, the viewer can learn as much from such a book as from reading. 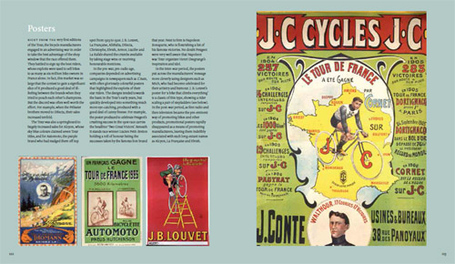 On the issue of choosing their images Laget and co deserve applause, they actively seeking previously unseen images as well as using some of the most iconic pictures from the Tour's history. Take, as an example, the image below which comes with the following caption:

"1909, Grenoble. A night start for the stage to Nice, during which the riders will depend on the light of the moon or on weak lamps that just about illuminate roads that are more or less white. With their eyes full of stars from the magnesium flash of the camera, they will head off into the dark almost blind until their eyes get accustomed to the gloom. Nice is 345 km away. It will take Faber 12 hours to get there, while the last man to finish, Italy's Augusto Pasquali, will need almost 18!" 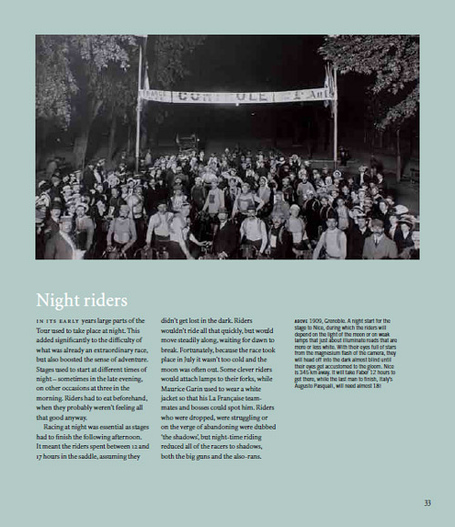 Speaking about this picture Laget was recently quoted in the Guardian newspaper as saying he'd bought it in a Parisian bookshop twenty years ago.

Tour de France: Official 100th Anniversary Edition is, as it says on the tin, the officially approved history of the Tour de France. In this regard one may offer certain criticisms, such as a lack of information on quiet how the Amaury family came to own the race, or any questions as to how well the race organisers have really fared in the fight against doping. But whether you will ever find a single Tour history that satisfies all your needs is something I doubt and so the biases of Laget and co don't really harm the book, just require that you balance this book with one that is more questioning of accepted history. 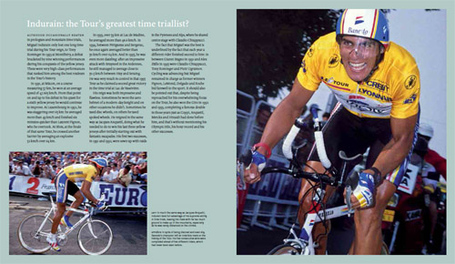 Another criticism is that, in radically reworking the text of the centenary history for this one hundredth history, some useful pieces have been lost, such as articles excerpted from l'Auto for the early years of the race, or the lists of stage winners that the original book had. Having previously criticised books for not going back and reworking text it would be wrong of me to make this a major criticism. It's more of a quibble.

That reworking of the original text is, of course, a reason to buy this even if you've already got the centenary edition. And, of course, another reason to look at this anniversary edition is that a lot has changed in ten years. Oscar Pereiro, Alberto Contador, Carlos Sastre, Cadel Evans and Bradley Wiggins have all added their names to the list of Tour winners. Floyd Landis added his and then saw it removed. And Lance Armstrong is supposed to have been disappeared from official Tour history, become the man who wasn't there. But like Banquo's ghost, the Texan just can't stay away from the party.

Officially, Armstrong has been air-brushed from Tour history, his sole contributions to the grande boucle being his Verdun stage win in 1993 and his Limoges stage in 1995. Realistically, for all of us, he is and always will be the man who won the Tour seven times and then had his wins stripped from him. And that, pretty much is how Laget and co tell his story. How Armstrong won the race seven times, how the doping allegations surfaced during his run of wins, and then how those seven titles were eventually stripped from him. 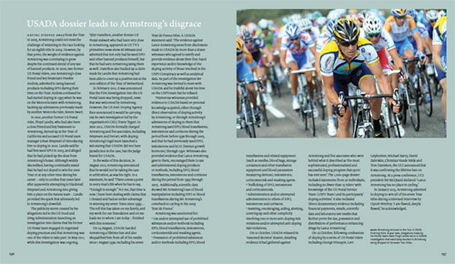 Weighing in at a wrist-sapping two kilos Tour de France: Official 100th Anniversary Edition is not light, not a book you're going to curl up in bed with. But for its mix of words and images, it is a Tour history most cycling fans will want on their bookshelf.