Like a phoenix from the ashes, and other clichés of redemption and rebirth, the Philadelphia Liberty Classic has defied cancellation to come back stronger - and we can follow the all-new Parx Casino Philly Cycling Classic live!

Like a phoenix from the ashes, and other clichés of redemption and rebirth, the Philadelphia Classic has defied cancellation to come back stronger - and we can watch the all-new <a href="http://www.phillycyclingclassic.org/" target="new">Parx Casino Philly Cycling Classic</a> live!

(As with all promises of women's races being shown live, don't get your hopes up too much! It might be live coverage, or it might just be fixed cameras etc - we'll have to wait and see!)

The previous incarnation, the Liberty Classic, dated back to 1994 for the women, and 1985 for the men - and this year it's the only UCI-ranked USA race on the women's calendar. It's always been a lap race, with the circuit including the thigh-biting Manayunk Wall, a climb that's a quarter of a mile long, average 10% and gets up to 17% - but while in the past it's been dominated by sprinters, this year the course has changed, so it finishes on the climb - that'll be very tough indeed. But with prizes of $30,000 each for the women's and men's winners, and an extra $5k for the king and queen of the mountain, there's a lot to race for! 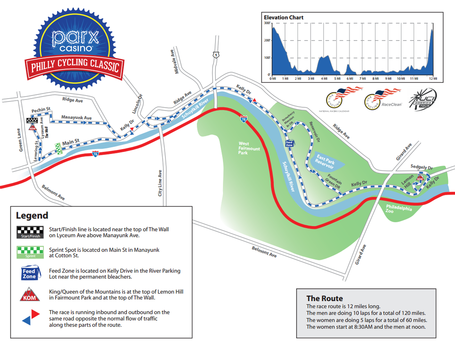 The women race 5 of the 12 mile lap, and the men 10 - and this time they won't be on the course at the same time, which is a shame - in 2009, the women's peloton caught and overtook the men, with Ina-Yoko Teutenberg famously telling the men they were a bunch of pussies and should ride faster, as she lead the bunch past them!

Because the course has changed so much, previous years' palmarés don't apply - but the women's race has never yet been won by a rider from the USA. Last year's winner Teutenberg won it five times in total, and Petra Rossner had seven victories - while among the men, Alexander Serebryakov of Team Type 1 won 2012, joining riders like André Greipel, Matthew Goss and Matti Breschel. This year? The women's team list is predominantly USA-based teams (there's no startlist, but I'd watch out for riders like Evelyn Stevens, Mara Abbott, Alison Powers, Janel Holcomb and new USA Champion Jade Wilcoxson - and non-USAians Claudia Häusler, Lex Albrecht - but bear in mind I'm not that good at USA cyclists - tell me in the comments who I should be looking for!)

There's lots of information on the great race website - and for a proper preview of the women's race, read John Cyclopunk's on Les Déesses de la Route.

Join us in the comments to follow the race live - and if you know any more information, or have any questions, please do let us all know!