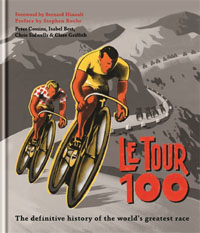 No single book can ever tell the complete history of the Tour de France. In the hundred and ten years since Maurice Garin and fifty-nine others set out from Paris on a Saturday afternoon on that first Tour in 1903 nearly five thousand men have ridden the Tour, there's been ninety-nine editions of the race - 2013 is, in case it's somehow passed your attention, the race's hundredth edition - and fifty-odd winners. There's been more than two thousand stages raced. Take the number of starters - just shy of fourteen thousand - and multiply that by the number of stages raced and you've got the thick end of thirty million different day-by-day stories you could tell. For the 2012 Tour there's 3,613 stories to choose from in telling its tale, from the yellow jersey down to the lanterne rouge. And that's just focusing on the riders. Add in the stories about the teams, the race itself and the wider cultural, social and political history of the race and you've got a story that is impossible to capture between the covers of one single Tour book. Which is why there's so many of them - the hundred Tour books we listed here barely scratch the surface - and why most of us end up owning so many of them and not settling on a single version of the race's history, not accepting just one telling of the tale.

It's also why I think the publishers of Le Tour 100 have done themselves no favours by putting the word definitive in the title of this collection of tales tall and short from the Tour's history. That's like putting a 'kick me' sign on your back. What the book really is is best summed up in this back-of-book blurb:

"The book profiles the 100 most memorable stages that shaped the history of cycling ... in a unique visual presentation. The book is filled with bespoke digitally-generated maps, iconic photographs and a thorough gazetteer plotting the route of every single Tour and listing all the jersey holders."

Some images might help here, so below you can see some double-page spreads, showing pages from the gazetteer section and one of the single-stage stories told. 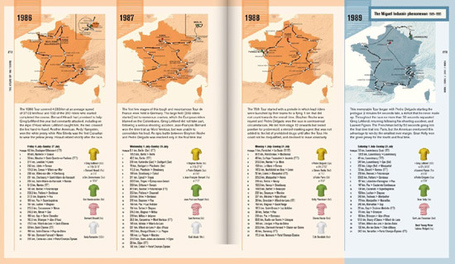 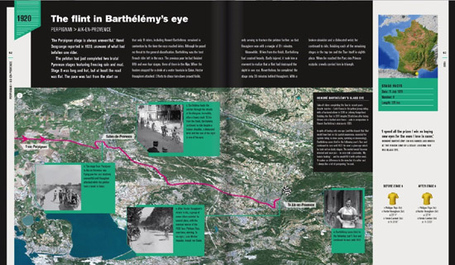 The gazetteer pages - compiled by Clare Griffith - offer hundred-word summaries of each race, a listing of the stages and their distances, the three podium finishers (and their times) and the winners of the principal other competitions (green, polka-dot and white jerseys) as well as a thumbnail map sketching the route of the race around France.

The main body of the book is the stories of one hundred key stages, as told by Isabel Best (covering the Tours from 1903 to 1965) and Peter Cossins (covering the Tours from 1967 to 2012) and these are the pages illustrated by those bespoke digitally-generated maps the back-of-book blurb mentioned. Supporting the stories told in these pages you're given the basic stage facts (date and distance) a stage profile and the main general classification places before and after the stage. The main body of each story is the stage route mapped on a satellite photograph of the area covered with key moments from the stage pointed out. The best way of showing being by example let's take one stage, something of recent vintage, the 2011 Tour's stage 18, running from Pinerolo to the summit of the Galibier: 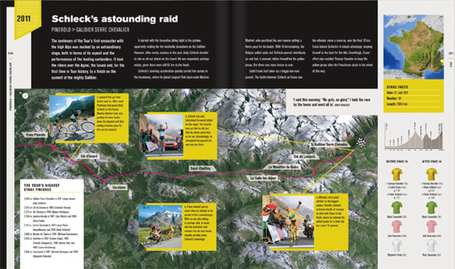 "The centenary of the Tour's first encounter with the high Alps was marked by an extraordinary stage, both in terms of its aspect and the performances of the leading contenders., It took the riders over the Agnel, the Izoard and, for the first time in Tour history, to a finish on the summit of the mighty Galibier.

"It started with the favourites sitting tight in the peloton, apparently waiting for the inevitable showdown on the Galibier, However, often overly cautious in the past, Andy Schleck decided to risk an all-out attack on the Izoard. No-one responded, perhaps wisely, giver there were still 62 km to the finish.

"Schleck's stunning acceleration quickly carried him across to the breakaway, where he joined Leopard-Trek team-mate Maxime Monfort, who sacrificed his own reserves setting a fierce pace for his leader. With 16 km remaining the Belgian pulled aside and Schleck powered relentlessly on and had, it seemed, ridden himself into the yellow jersey. But there was more to come.

"Cadel Evans had taken up a dogged one-man pursuit. The battle between Schleck and Evans was the ultimate mano a mano as, over the final 10 km, Evans halved Schleck's 4-minute advantage, keeping himself in the hunt for the title. Unwittingly, Evans' effort also enabled Thomas Voeckler to keep the yellow jersey after the Frenchman stuck to his wheel all the way."

The pullouts on the map mix words and photographs to tell how Joost Posthuma paced Schleck up the Izoard before Montford took over on the descent and the lead up to the Lautaret. Then how Evans, dragging Voeckler behind him, took up the chase and slowly closed the gap. And, finally, shortly after Schleck claimed a memorable stage win, how Voeckler held on to the yellow jersey for a tenth day, his lead cut from a minute eighteen to just fifteen seconds.

The telling is economical, but covers the key moments and captures the essence of an epic day when the exploits of the past returned to a Tour many believe tamed by over-cautious team tactics, with the satellite map allowing you to follow the day's route.

Other stage selections are well known - the Pelissiers in Coutance, Vietto's sacrifice, Rivière and the ravine etc - but Best and Coussins also pick out stories like Honoré Barthélémy in 1920, a tale which puts stories of broken shoulders and necrotic hips in the shade, he finishing the Tour blind in one eye and with a couple of broken bones. This mix of familiar and not so familiar - José Maria Errandonea winning the first ever prologue - makes for a fun read to dip in and out of. 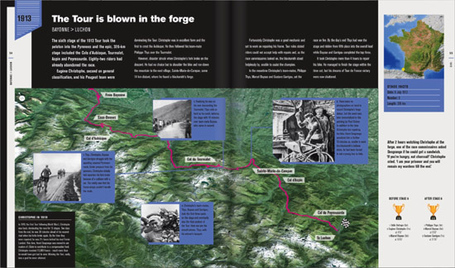 Opening the book is a brief run-through of the men who made the Tour, compiled by Chris Sidwells, rattling through the key changes in the race and the main men who've left their mark on the Tour's honour roll by winning it. As with most of the other Tour books the revisionists' attempts to airbrush history is ignored and Lance Armstrong's seven Tour titles are duly noted, along with the fact that they've since been stripped. In the same way that Maurice Garin is still seen as the winner of the 1904 Tour - the winner who was stripped of his win - doing it any other way would be wrong. But Le Tour 100's soft-focus approach to the tricky topic of doping is probably best summed up in this quote from Sidwells:

"He won an unprecedented seven Tours in a row by being the best time triallist and the best climber and he was backed by the most powerful team. It was a brutal but efficient way to win [...] Lance Armstrong in an amazing athlete and a formidable person. His story boosted the Tour de France's worldwide profile. His work in the cancer community means a great deal to a great many. His love of cycling runs so deep that he came back at the age of 38 to race in the 2009 Tour, when he finished third, and in the 2010 Tour." 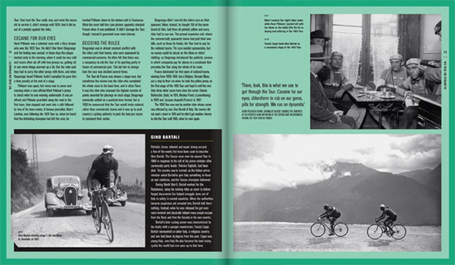 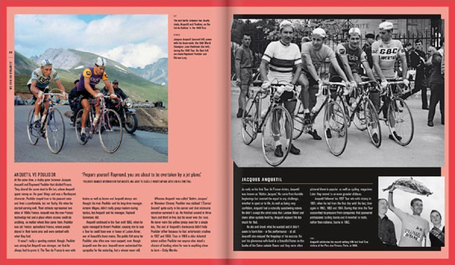 As well as the stories, Le Tour 100 is also peppered with Tour statistics, such as winners in consecutive years, winners by country, yellow jersey abandons etc. Overall, this approach makes Le Tour 100 an upmarket miscellany, something beyond the two beginners' books covered in previous reviews, suitable both for people coming new to the Tour and those who've already read other, more detailed histories of the race.