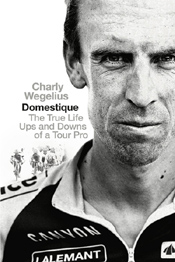 "I live in fear and that is probably what motivates me to do well a lot of the time - because, really, I'm just shitting myself." So opens the new autobiography - Domestique - from Charly Wegelius, whose pro career saw him riding with teams like Mapei, De Nardi, Liquigas and Lotto before ending his time in the pro ranks with United Healthcare and them hopping into the driving seat of a team car as directeur sportif with Jonathan Vaughters's bunch of lost boys at Garmin. In all that time and at all those teams Wegelius rarely got to win for himself, his job being that of a helper bee, one of the many spear carriers whose job it is to break wind and pass water for their leaders. Now, in his new autobiography, Wegelius talks openly and honestly about his life as a domestique.

Domestique is receiving lots of (deserved) praised for the insights it offers into life in the pro ranks (we'll be reviewing it on the Café Bookshelf during the Tour de France) and is a rider autobiography that most fans will want to read. Today, as part of out celebration of Tour and Tour-related books - see the 101 on Tour 100 books - Podium Cafe is teaming up with Ebury Publishing to give you a chance to win a copy.

In previous competitions you've simply been asked to post a comment or a Tweet. This time, your in-depth knowledge of cycling is going to be tested by a fiendishly difficult question (please: no Googling the answer, that's just cheating). Which is this:

In Italy a team helper is known as a gregario. In Spain they use the word amigo. But what word - coined by the father of the Tour himself, Henri Desgrange - is used by the French to describe a team helper?

Submit your answers below or via Twitter using the hashtag #WinADomestique. Entries close noon (BST) Thursday, winner will be announced below and on Twitter (@fmk_RoI). Usual rules apply: enter early and often, winner is first name pulled out of the hat, judges' decision is final. And if you don't win don't despair: we'll have more book competitions on the Tour's two rest days. And you can always buy Wegelius's book here. Or just stand outside a bookshop and mug the first person you see coming out carrying a copy.

Domestique, by Charly Wegelius (with Tom Southam) is published by Ebury (2013, 302 pages).