What's your favorite team up to at Le Grand Boucle?

Time once again to look at what each team is thinking about as they sit down to dinner in Porto-Vecchio tonight...

Primary Focus: Yellow. They seemed to enjoy it last year.

Secondary Ambitions: Arguably points, but if there's one difference between this year's team and last year's, it's the complete lack of temptation in the direction of other objectives. Cav? Sure, you can hang out with us and we'll bag you a stage or two. This year? All yellow.

Outlook? We've been thru this. It's pretty good. 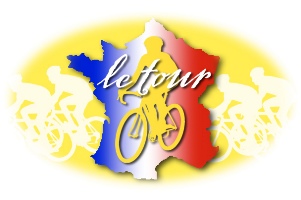 Secondary Ambitions: Stage breaks. Moser has already demonstrated his tactical nous, and there are lots of stages calling on the same qualities as the Strade Bianche he bagged in March.

Outlook? For an Italian team, this should be a very fun Tour.

Primary Focus: Yellow. OK, I said it. Now, do I think Van Den Broeck gets within ten minutes of it? Probably not. But that's what this team is here for.

Secondary Ambitions: Green/Stages. Obviously Greipel is a viable candidate for the points jersey, though not the favorite. He's sure to get a stage someplace... I think.

Outlook? Should be enough success to keep them involved. The climbs where VDB will drop off aren't til pretty late, and Greipel really is a terrific rider. The rest of the team are good hardscrabble vets, with breakaway potential in abundance.

Primary Focus: Yellow. This team is all-in for the GC.

Secondary Ambitions: Approaching zero. I mentioned Gilbert for points, because I had to. I suppose the World Champion always wants to bag a Tour stage in the rainbow jersey.

Outlook? Wow, is this gonna get interesting. Is their stated goal of lining up behind Evans instead of van Garderen for real or a sandbag? Frankly, it's quite a choice. You have one guy who just finished 5th and is approaching his best years. Gotta be your guy, right? Maybe, and Tejay's performance this spring has included increased determination, culminating in a Tour of California title. But his ceiling... not sure about that yet. So let's look at plan B: a 36-year-old done-it-all who's one illness-marred season removed from winning the Tour de France. Except for the 36 part, that's totally your guy. Right? I mean, he just finished third in the Giro. Wait, is that a good thing or a bad thing? Is he on fire or about to hit the wall? BMC... where it's fun to find out.

Either way, I think they're in for an exciting Grand Boucle, one where they're part of the conversation to the end and vying for the podium. Whether it's one guy or the other, I don't see it being too toxic for them to wait and see. Cadel is just respected enough and Tejay just patient enough that even if backing Cadel blows up on them, it's not going to shatter the team.

Primary Focus: Yellow, or at least a presence in the mountains. The old Andy Schleck would have positively loved this course. In fact, he'd be the favorite to win.

Secondary Ambitions: Stages? What else, Matlock reruns? I mean, between Voigt and the the two-headed beast known as Andremar Klobeldia, these guys just keep on going, don't they? Gallopin, a classics guy, could take a liking to the first 12 days or so. Monfort could hang around a while, though his surprising 16th last year probably said more about the crono-heavy course than a sudden Tour-ability.

Outlook? Not great. With no Tour last year we've been left to wonder for close to two years whether Andy Schleck 2.0 is really happening, or whether Andy 1.0 will shed the droopy shoulders and suddenly fly up the Ventoux, like in the past. Maybe he's still Andy, but he only cares about the Tour? How can he not still be Andy? At least we should get our answer.

Primary Focus: General Classification. Let's not say yellow. Well, maybe grabbing yellow for a while. That always seems to work out well for the Vendee Boys.

Outlook? Rolland intrigues me more, though Voeckler always seems to do his thing. Rolland DNF'd at the end of a crappy Dauphine, but said he was in good shape coming in. Did he lose anything in the rain? Hope not.

Primary Focus: GC for Brajkovic. He was top ten last year. Guess he'll try to do that again.

Secondary Ambitions: Stages. Fuglsang and Gasparotto are both good climbers with no grand tour pedigree. Lump em in with the Classics bunch... which is a big bunch this year.

Outlook? Meh. Really, this team is just a placeholder for 2014 and the Shark Attack.

Primary Focus: General Classification. Pinot will be under ridiculous pressure to exceed his Tour debut performance (10th, with a stage), but on the plus side he's looked up to the task. Jeannesson was 11th a couple years ago, and playing second fiddle might make his task easier.

Secondary Ambitions: Stages, possible KOM attack. Roy has been known to go after mountain points. Bouhanni starts as their sprinter, with William Bonnet around to help or take over.

Outlook? I'm bullish on Young Thibaut. I like Thibaut Time. Let's do this.

Primary Focus: Making a dent in the GC.

Outlook? Crappy. I already covered Peraud; Bardet is a kid (although fun to watch perhaps?), and Hutarovich got left home. Like Astana, they'll get a lot more interesting next year when they can have Betancur ready.

Secondary Ambitions: Approaching zero. I don't think Bennati is here to chase stages; I think he's here to be awesome at lots of useful things. Which he is.

Outlook? The mystery to the entire Tour is, which Alberto do we get? The pre-suspension one who was virtually unstoppable in grand tours? Or the guy who's been a step slow all year?

Primary Focus: Yellow jersey. Want to shut people up about all your near-misses in the Giro and Vuelta? Win the Tour.

Secondary Ambitions: Green Jersey, stages, further embarrassing the UCI. Well, you or I would be embarrassed about the wranglings between the UCI and Katusha that went on this past winter. Phat Pat probably isn't. Anyway, Kristoff is really awesome at climbing and sprinting, but it's not clear that he'll be awesome enough to challenge for points. So yeah, stages. Same for Moreno, who has a tendency to grab occasional wins when Purito doesn't have it.

Outlook? Rodriguez is never gonna have a better chance at the Tour. Never. And he's never had one like this in past years. He's allergic to flat time trials, but this year has one minor one, and an uphill version where Rodriguez should be OK. Plus those climbs... more than once he's looked like the best climber in the world. At age 34, if he can do that again this July, he's got a real chance to win.

Primary Focus: Respectability. Cuz that's one thing they don't have so far this season.

Secondary Ambitions: Stage wins in the Pyrenees. Pays all the bills.

Outlook? Don't make me say it.

Primary Focus: Yellow Jersey. They're loaded up for the mountains.

Outlook? Vaguely similar situation to BMC's, except the old guy isn't as good and the young guy is even younger, but more intriguing, with seemingly limitless climbing ability. Valverde, at 33, hasn't exited his prime, and before his, um, vacation he bagged an 8th at the Tour and a win in the Vuelta after a few years dominating shorter stage races and classics. So is he a real contender? Last year's 20th place was about a bad course for him and some rust. So yeah, I get why Movistar are all in for Valverde.

Quintana, meanwhile, looks like a future Tour winner, holding his own in the time trials and climbing like he has an appointment with the Cycling Gods. Still, it's borderline insane to think he can win at age 22 in his debut. He was 36th in the Vuelta last year. Give the kid time... but don't be shocked if he goes off in the Alps. Lastly, their hottest rider by far is Costa, Tour de Suisse champ. Not much of a three-weeker (yet), but it wouldn't shock me to see him move way up.

Secondary Ambitions: Stages. Mate and Le Mevel are both locks to win one. Seriously.

Outlook? Hm, I would have a little more confidence in Coppel, whose Tour career is still just getting going, if I'd seen him even once this year. Taaramae has been equally anonymous, but it was two years ago, at age 24, when he was knocking on the Top Ten door. Probably a better bet.

Primary Focus: Stages. Cunego is realistic at this point, right?

Secondary Ambitions: GC somethingness. Niemiec is coming off 6th at the Giro, but this ain't the Giro, and anyway who does that race and feels fresh for the Tour?

Outlook? Not good. Hey, at least the weather is even hotter back home. Enjoy the vacation.

Primary Focus: Points Comp. Cavendish will settle for nothing less.

Secondary Ambitions: Stages, obviously, and maybe Chava in yellow early on? He's got a great chance at it, with the TTT only furthering his chances.

Outlook? Been thru this already. Cav can win, even if I don't think he will.

Outlook? I've cast my lot with Gesink enough to know I shouldn't expect anything, but at his best he's still a wonderful climber and this is a climber's Tour. So... you never know. Sep, I dunno, maybe he can't win any stages in this race, but I couldn't pass by without a mention. Wassup Sep!

Primary Focus: Jersey-bombing the General Classification. Granted, I just made up that word, but if there's a prize for most guys in the top 20... wait, there is! The Teams classification!

Secondary Ambitions: Stages, I guess. One never says no to a Tour stage. And their guys should be just far enough from yellow for that last-km attack to succeed.

Outlook? Guess I tipped my hand. Apart from Vande Velde, who's more a support guy now, each of these named guys is both intriguing and unlikely to grab a podium spot, unless there's some attrition among the GC. In other words, they have a chance. Talansky has the best overall makeup, but it's his first Tour. Martin has been on fire, but when has the three week format ever suited him? Hesjedal went home from the Giro after his legs abandoned him. Dennis could be the best rider on the team... but for crissakes, this is his first grand tour, period. Garmin are in transition, and assuming Vaughters can lock up his young core contractually, he's got to be salivating over the near(ish) future.

Primary Focus: Stages. Goss will hone in on green if it's realistic, but more likely he focuses on stages. Gerrans should have a few shots at a win too.

Secondary Ambitions: KOM, GC. Clarke was the KOM in Spain last fall, so there's that. Meyer, meanwhile, might like to creep up the GC on the strength of his crono ability.

Outlook? Eh, bad course for Meyer. Better one for Goss.

Secondary Ambitions: Stage wins for the other guy

Outlook? Well, I suppose I'm on record as saying Kittel will win a stage, so there you go. Tom Dumoulin might get a notice, he's been strong and can rock the crono.

Secondary Ambitions: Finding new employment. Sad story, unless it turns out not to be, e.g. new opportunities for riders and staff for a more stable team.

Outlook? They seem to be just throwing names at the wall. Danny van Poppel? At age 19, at least we know he qualifies for the White Jersey. What he's doing at the Tour, I have no idea. Well, one idea: they have a lot of crono guys. Might be gunning for the TTT. Hopefully Danny can hang in til next week sometime.