A strange day, even by Tour de France standards...

Marcel Kittel of Argos-Shimano avoided a seemingly endless set of landmines en route to the conclusion of stage 1 of the Tour de France and won the sprint for the win over Katusha's Alexander Kristoff. Kittel emerged on his own from a mishmash of opportunist sprinters after his team had brought him to the final kilometer of the race, and Kittel showed he was easily the strongest of the field, coming up the left side from behind Lotto-Belisol's Jurgen Roelands, without incident.

And that was about the only moment of this stage's final phase that went off without incident. A large pileup with about 5km to go eliminated favorites Mark Cavendish and Peter Sagan from the sprint -- Sagan went down, unhurt, while Cavendish got blocked. A Radioshack-Leopard rider leaned into Cavendish's Omega Pharma-Quick Step leadout man Gert Steegmans, and Steegmans was knocked over, immediately taking down Cannondale's Sagan. Andre Greipel seemed to have survived the chaos, but was seen a couple minutes later standing next to his malfunctioning bike. Orica-GreenEdge's Matt Goss, probably the next biggest favorite, went down in the final turn from a touch of wheels.

But all of this paled in comparison to the Bus Incident. 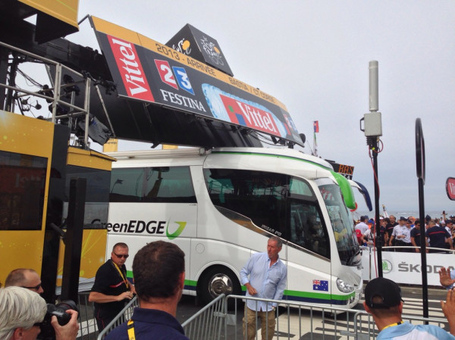 With very little time left in the race, the team buses rolled past the finish line, but the Orica-GreenEdge bus, apparently the tallest of the lot, got stuck under the finish line banner, a steel scaffolding contraption. And by stuck, I mean it couldn't move. The bus had managed to raise the banner, destabilizing the finish line scaffolding, and the causing the organization to evacuate the immediate area. For some time, with the bus not moving, a scramble ensued to determine where the stage would finish. First it was at 100 meters. Then it was moved to the 3km mark, on the theory that there was a camera on hand to sort out photo finishes. But that line was set just around a tricky curve in the road, an utterly dnagerous place to stage a sprint.

Panic ensued as the race thundered home, with no communication as to whether the riders themselves had been told where the finish would be. Later, winner Marcel Kittel was asked about the bus and was completely unaware of the matter, meaning that the peloton was minutes away from a finish that nobody knew was the finish. How much that would have sucked, we can only speculate. Let's start with "a lot."

But everything changed, suddenly, at the 5km mark. At nearly the same moment, the decisive crash occurred and the bus was removed from the finish area, backing up, and the finish line did not collapse, meaning the race could end as planned. At least as far as the surviving riders were concerned.

One consequence of the crash is that Saxo-Tinkoff's Alberto Contador, former Tour winner and a favorite this year, landed on his shoulder. At the time of this writing it is unclear whether he sustained injuries serious enough to derail his Tour hopes, but if he has, this will be an even bigger story than the temporary disruption of the points competition or the bus nonsense.

[update] OPQS' Tony Martin appears to have broken his collarbone and is out of the Tour. Cannondale's Ted King is said to have gone for a checkup; hope it's nothing much. Sky's Geraint Thomas may also be out after flipping in the crash, possible collarbone. Contador has said he's OK. Keep scanning the comments for news as it happens.

Some of the early action included Chris Froome crashing in Km 1 (not a typo), albeit without serious incident, and Lars Boom taking the intermediate sprint from Juan Antonio Flecha. Andre Greipel was first of the big three, pipping Sagan and Cavendish for a couple extra points. There were also some moments of excitement entering the final hour as the peloton whipped up the pace as crosswinds raised the prospect of splitting the field. Ultimately, though, the pack stayed intact, the pace was too high and the front too determined for any breakaway nonsense, and the sprint was on... eventually.