How Many Times Should I Kiss You?

Share All sharing options for: How Many Times Should I Kiss You?

Some of you may have noticed that when the young Belgium stage winner Jan Bakelants was on the Podium he exchanged two kisses with the podium girl, then turned his head and accidentally missed her attempted third kiss.

Forget bus-gate, now we have kiss-gate (more on today's podium further down).

Kissing in Europe can be complicated, so I am here to help. As a young Canadian on my first international business trip nearly two decades ago, I spent four hours working with a very nice lady in a small Manhattan office. As I left by taxi, she leaned in and kissed me twice. Yikes, I was terrified. I sweated for a week, until someone explained to me that fooffy New Yorkers kiss like Canadians shake hands.

Years later, now living in France, I kiss a lot, but it can still be confusing.

But don't worry, there is a great website: combien de bises (how many kisses) that divides France by political "department" and allows residents to vote on how many times they kiss in greeting. 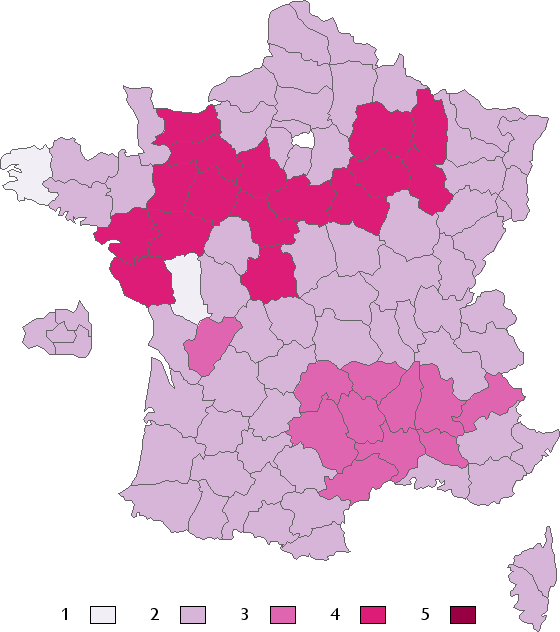 How to kiss: generally offer your left cheek first, air kiss your acquaintance's left cheek (leaning right). Then switch sides. No need to hug unless it's mom.

Excitingly for kiss aficionados, week two of the Tour de France heads up north and crosses FOUR kiss land. Suddenly these stages seem far more compelling! I cannot wait. Fortunately, while the course sneaks into Brittany it just misses one of only two one-kiss departments in all France: Finistère (I had always heard that it is cold, wet and lonely up there).

Back to today's podium. Belgians kiss three times, it's a very friendly country. But as the map indicates, Corsicans only kiss twice. So perhaps Bakelants and the Podium girl had done research and were trying to accommodate each others' kissing preferences? I'd certainly like to think so.

Last summer, I met a french male friend from the south of France to go for a ride. I didn't know him that well, and as we met I realised he was leaning in for a kiss. I didn't flinch, and we executed a quick blow on cheek, two kiss dance. My first man kiss, flawlessly executed. I was much pleased.

How about outside of France?

And then there's the British (disclosure, I have a UK passport). Correct me if I am wrong, but I think kissing hello is generally a relatively new thing there, at least for the masses. And quite frankly, especially the men, they smooch too hard on the cheeks. No air kiss for a Brit. So gauche. :)

The Swedes? I have no idea, but I hugged Jens hello last time he visited, and he seemed very, very , very uncomfortable. But at least he seemed grateful for the flowers.

So I clearly still need help.

We have a very international crowd here at Podium Cafe. So tell me: How many times should I kiss you?