The Breakaway, by Rolf Rae-Hansen

Share All sharing options for: The Breakaway, by Rolf Rae-Hansen 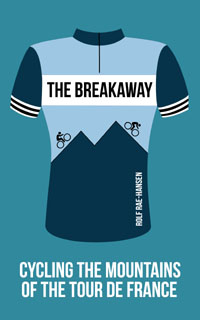 Title: The Breakway - Cycling the Mountains of the Tour de France
Author: Rolf Rae-Hansen
Publisher: Rolf Hansen
Year: 2013
Pages: 188
Order: rolfraehansen.blogspot.com
What it is: Two Scottish cyclists tackle some of Italy and France's most fearsome climbs.
Strengths: The two strands of the mountains and the fracturing friendship are what you want to read.
Weaknesses: That story comes packaged with a lot of inconsequential daily melodrama that really should have been edited down, or out.

If you stop and think about it, annual holidays are a relatively recent invention for modern civilization. Oh for sure, since time immemorial the well-to-do could bugger off round the world on a grand tour, collect souvenirs along the way and then come home, redecorate the mansion and write up their adventure knowing that someone would publish it, even if they had to pay for the privilege. But it's only in recent generations that the annual vacation for the lower classes has come about.

For a while, that annual vacation was a "get away from it all" trip - all being work colleagues, friends and family, and the normal rules concerning drink and sex. Today, though, the annual holiday has become an adventure, a cross between the grand tours of old and an attempt to be Marco Polo / Paul Theroux / Michael Palin for a fortnight. And, as with the grand tourists of old, you haven't been abroad if you don't come home, write your holiday up and publish it.

For most people, that account of their holiday is - let's be honest here - not very interesting. Sometimes though, someone comes up with a wonderful idea for a holiday and the whole thing goes so tits up that your inner voyeur just can't help wanting to know about it. That, bluntly, is The Breakaway's USP.

The wonderful idea Rolf Rae-Hansen and his travelling companion - given the pseudonym Drew Henderson, for reasons which will eventually be explained - came up with was to decamp Edinburgh, fly to Italy, hire a car and travel between the Dolomites, the Alps and the Pyrénées ticking off as many Tour de France and Giro d'Italia climbs as they could in just over a fortnight. Their long list ran thus:

To save you the bother of counting them, that's thirty-three mountains to be summited in - the schedule said - sixteen days of riding. Some days there was just the one climb on the menu, others two, three or even four, such as the day the duo were supposed to tackle the Stelvio, Gavia and Mortirolo one after the other. Ambitious? You could say that.

As Scottish cyclists Hansen and Henderson were not exactly inexperienced when it came to climbing, having grown up on the delights the Highlands has to offer the discerning recreational rider. And they'd already tried the hard-stuff, riding Alpe d'Huez during the Tour one year and tackling the Pico del Veleta while on holiday in Fuengirola another. But, in essence, they were just recreational riders. Yes, keen to emulate the exploits of their heroes - which covered the spectrum from Robert Millar to Marco Pantani - but, well, more blessed with ambition than ability.

In order to tackle the three different mountain ranges the pair planned to base themselves in different locations from which to launch daily expeditions to that day's climbs. So, say, for the Dolomites they picked as base-camp Trento, or for the Alps they moved between Briançon, Bourg Saint Maurice and Grenoble. The plan was to drive from base-camp to the start of each day's climb, get up, get down, drive on to the next, repeat and then drive back to base.

What is it they say about the best laid plans of Mycenaean men? Commenting on a certain class of British 'adventure' writing before, I have noted how the British seem to love the notion of amateurs abroad and the all the pratfalls that befall them. The five Ps - proper preparation prevents pisspoor performance - are scoffed at in preference for the philosophy of 'it'll be alright on the night.' Knowing full well that, come the night, things will fall apart quicker that a house of cards in a wind tunnel. And thus it is with Rae-Hansen's cycling adventure.

Why things go wrong for our two intrepid travellers is hard to explain, and probably best left for you to discover for yourself. We get to understand some of the demons driving Rae-Hansen (the death the year before of his father) but when it comes to Henderson his are not to be understood. But, between one thing and another, the two travelling companions start drifting apart. Holidays can be testing times in any relationship - bromance or romance - and this trip certainly tested the two amigos.

Rae-Hansen and Henderson had first met six years earlier, while working as postmen for Royal Mail - the British version of US Postal only with more tea and less doping - where they bonded over a mutual love of cycling and the Stone Roses (what is it with men and bonding, that it's always music and/or sport?). Over the years since first meeting their friendship had had its ups and downs but seemed strong enough to survive this new adventure.

As the friendship fractures, a suitable sub-title for The Breakaway could have seen Hansen borrowing from one of the masters of the travel writing genre, Laurence Sterne: A Sentimental Journey Through France and Italy. Hansen and Henderson become more and more alike to the Knight of the Woeful Countenance - each getting more and more miserable - although I'd hazard a guess that each thought he had become the other's Sancho Panza.

While I'll skip over the why of the relationship breaking down, the when and the where is easier to explain: it'd been building from the off, each petty drama turning into a crisis and the adventure becoming more and more stressful and less and less relaxing. The straw is placed upon the camel's back on the Stelvio, where Hansen scooted off up the hill, Coppi to his companion's Koblet:

"There I had committed, if not a crime, then at least a cycling-etiquette faux pas. In my fixation with keeping a bike-length ahead of the bonk I had ridden off and left Drew on his own. He wouldn't be happy, I wouldn't have been happy had he done the same to me. I recalled our Spanish holiday from the year before and the day when we'd escaped the horrors of Fuengirola to cycle up to the Pico del Veleta, (the highest paved road in Europe, no less). Drew had grown thoroughly bored of waiting for me to slog along in his wake and had steamed off ahead without so much as a by-your-leave. That 'abandonment' had pissed me off and I'd sworn never to do likewise to him or anyone else I happened to be riding with. Yet, there I was, alone at the Stelvio summit, my mate riding solo, miles back down the road."

From there on in as each new day takes them further and further from their original dream for the holiday, the chasm separating them yawns wider and wider.

One of the problems I have with books such as this in general - homemade cyclo-travel writing - is that they tend to deal too much with insignificant problems. Every new town, it's a nightmare to follow the directions and find. Every new hotel, it's a nightmare to check in and the accommodation is never up to snuff. Every restaurant it's the same problem with the menu and the waiting staff. Nothing ever seems to happen easy and - since problems are the real adventure - everything gets to be reported in too much detail. Most of that is immaterial, it's making mountains out of molehills. After a while you simply become inured to it all, you mentally disengage while the narrator goes on and on and on, waiting for the real thread of the story to be resumed, sometimes missing the point where the drama of the moment was the real thread.

That real thread here is the twin tales of the mountains and the disintegrating friendship. When talking about the mountains Hansen does actually make them interesting. Take this passage about the Dolomites:

"The ancient inhabitants of the area, the Ladins, knew the mountains by another name: lis montes pàljes, or the pale mountains. A Ladin legend states that dwarves who lived in the region created the Dolomites' unique colour by spinning moonbeams around the peaks into a bright, diaphanous web. Apparently, they did this to alleviate the homesickness suffered by the daughter of the King of the Moon, who was also the spouse of the King of the Mountains. Those crazy Ladins were probably smoking too much Edelweiss to bother considering the rock's chemical composition but there really was a sense that we were casting our eyes over an alien landscape, no surprise that writers and artists have long taken inspiration from the Dolomites."

Around each of the mountains - most of the mountains - as well as stories like that you get tales from Tours and Giri past, grounding these climbs in what they mean for the two cyclists. As Graeme Fife showed with the first edition of his Tour de France book - and Tim Moore in French Revolutions (or in his forthcoming Giro book) - the personal adventure is an efficient way to dip in and out of cycling history and root that history in geography. Or even, if you want to get all Iain Sinclair about this, psychogeography.

"The first I had seen of Plateau de Beille, indeed the first many cycling enthusiasts had seen of it, was during stage 11 of the 1998 Tour de France (of course, skiers had been visiting in droves long before the Tour first interrupted the Plateau's summer calm). Up until then, the climb to the ski station hadn't featured in any Tour route, although it had featured in a smaller race known as La Route du Sud. During that Tour stage, Pantani had used the climb as a springboard for his attack, sprinting away from the group of main contenders in a manner that suggested his right hand was gripped around a motorbike throttle (remember, cycling's reality has often existed within inverted commas). Only Jan Ullrich had been able to attempt a counter move but his large diesel engine proved insufficient to overcome Pantani's nimble, petrol-driven, fuel-injected flight: Pantani never once settled, always getting out the saddle to press harder on the pedals and kick the tempo higher; another acceleration and the elastic snapped; Ullrich was dropped. Pantani caught and passed the remnants of the day's earlier breakaway, won the stage and in the process chipped almost two minutes off Ullrich's lead - and still nobody had the diminutive Italian down as a potential Tour winner. "

The other thread, the disintegrating friendship, makes for interesting reading but is - perhaps - a bit mishandled. The adventure told here took place in 2004 and after the holiday ended the two friends were friends no more. So much so that Rae-Hansen's travelling companion is here given a pseudonym. With nearly a decade's distance it would have been nice had Rae-Hansen stepped back from the day-to-day moments and approached the breakdown from a distance, stripping away much of the melodrama to highlight the real drama of particular moments. As it is, there's enough there for the reader to work on, draw their own picture, but that's not particularly satisfying. Perhaps here an epilogue would also have helped, to explain what happened when the two returned to Scotland.

For the history and the geography - and even the imperfectly told disintegrating friendship - The Breakaway makes a good read, though as with climbing the mountains themselves, you'll find yourself slogging through some of the unnecessary daily melodramas.