Excerpt: Bike! A Tribute to the World's Greatest Racing Bicycles

Edited by CyclingNews.com's Daniel Benson and friend-of-the-Café Richard Moore, Bike! is a collection of stories about iconic bike brands. Sarah Connolly and myself having contributed chapters to it, the book's not been reviewed on the Café Bookself. But you can sample a chapter from it, below, in which Benson looks at the history of Specialized.

Share All sharing options for: Excerpt: Bike! A Tribute to the World's Greatest Racing Bicycles

Mike Sinyard took his love for handcrafted European bicycle components and brought it to California. Starting out as an importer of parts that were difficult to source, he soon founded his own company, which today supplies some of cycling's greatest riders.

To look at him now, a slender, grey-haired man with the means of a millionaire, you would never guess that Mike Sinyard was once cycling's equivalent of a scrap metal merchant. Having started out as an aviation major, who then quit and transferred to business school, Sinyard shunned the lure of Silicon Valley and Wall Street and instead decided to make a living importing the European-crafted frames and components that made the US bike enthusiasts drool. As a student at San Jose University, he had already dabbled in the bike trade, having bought bikes at flea markets and sold them off through ads in a local paper.

To celebrate his graduation, Sinyard set off on a cycling trip to the Old Continent with the US $1,500 he had earned from the sale of his old VW. It was the summer of 1972. "Three months into the tour, after riding from Amsterdam to Milan, I met a Swiss woman at a hostel and started talking to her about biking," Sinyard recalled in an interview with CNN in 2008. "She knew a few Italian cyclists and said she would help me land a meeting with key staff at Campagnolo and Cinelli, two big Italian bicycle manufacturers. Up to that point, I had been travelling in a pair of jeans and a sweater I hadn't washed in a couple of months, so I spent some of my remaining money on a suit so I wouldn't look like a bum."

Through a combination of persuasiveness and half-truths about his connections on the US bike scene, Sinyard convinced Cino Cinelli to sell him US $1,200 worth of handlebars and components. When he arrived back in the United States he stored them under a trailer to keep them dry. Penniless and carless, he then built the parts into bikes that he rode around local cycle dealers to pitch for sales. "In Italy the artisans who craft lugs, frames, and tubing are considered specialists," Sinyard said in 2008. "I named the company Specialized Bicycle Components after them because I wanted to have a connection to that European passion and quality, something that would distinguish my products from the mainstream bikes popular at the time."

Business boomed. Banks that months earlier had scoffed at his business plan now agreed to loan him thousands of dollars. Sinyard also began to branch out. Still relying on his own bike for transport, he noticed that even the tyres that he was importing from Italy left much to be desired. Together with his friend, the framebuilder Jim Merz, he began experimenting with rubber compounds of his own. Around one year and forty prototypes later, Specialized Bicycle Components launched its first product: the Specialized Touring Tyre.

It was a slow burner, with few bike shops willing to take a chance on Sinyard's first creation, and only a handful of his most dedicated dealers were willing to sell his stock. However, the feedback was positive, and the tyre outperformed the imported models from Europe. Suddenly Sinyard was on to another winner, and the tyre was a breakthrough for his company's brand. Full bikes would come some time later.

Some people have credited Sinyard and Specialized with the first ever mountain bike, but that distinction is the subject of long-running debate. One thing is certain: a small troupe of biking bohemians were using Sinyard's components to build bikes that could handle the rugged trails of Marin County in Northern California years before anyone coined the term "mountain biking." Or, indeed, before Sinyard studied these home-fashioned, heavy-duty hybrids and launched the Specialized Stumpjumper, the first mass-produced mountain bike, in 1981.

"It turned out to be a niche-oriented product," Sinyard said. "Only about five or six of our stores wanted anything to do with it. The rest asked us, ‘What are you doing with this big kid's BMX bike?' Customers will get hurt on that thing."

In fact, those initial reservations proved to be justified; sales were slow until mountain biking finally took off in the mid-1980s. When it did, Specialized quickly captured a sizeable chunk of the market. The Stumpjumper remains, for many, the iconic mountain bike.

The company that had started off with a founder who had next to no funds, no car, not even a second set of clean clothes, now had an operation with more than one hundred employees. However, the good times did not last for long, and Specialized was close to bankruptcy within a few years. As Sinyard struggled to get to grips with the growth he had created, he brought in three executives charged with leading the company onwards.

One of their initiatives saw the launch of the Full Force range in 1995. The sub-brand was aimed at the lower end of the market and was distributed in Costco. The launch angered a number of Specialized's long-standing dealers, and it has been reported that Sinyard lost up to 30 percent of his client base. A year later Full Force was pulled.

Over time the company regained its footing in the market but the episode had a huge effect on both Sinyard and the brand. On the advice of a new executive-the previous three left-he wrote a small document detailing Specialized's mission: its DNA when it came to ideas and manufacturing. It became synonymous with the company's heritage and future development as it moved from strength to strength. At the time, the company was producing just one road bike, the Allez, but lacked a presence in the elite peloton. Moreover, Cannondale, Giant, and Trek had moved into the arena and were sponsoring a number of professional outfits.

This changed in 2000 when Specialized signed a deal with the Festina team. It was two years after a Tour de France doping scandal and the team was almost unrecognizable from the squad that was ejected from the 1998 Tour. However, unlike Trek's alliance with Lance Armstrong's US Postal Service team or Giant's relationship with Laurent Jalabert and ONCE, Festina lacked a rider of true star quality.

"We had a placing with professional teams before," said Specialized's former marketing manager Nic Sims. "We'd been there in the past with helmets but we realized that we needed to get back in there and legitimize ourselves with bikes. The deal with Festina was just us dipping our toes in the water there, a far cry from the amount of time we spent with teams after that on developing our technology." 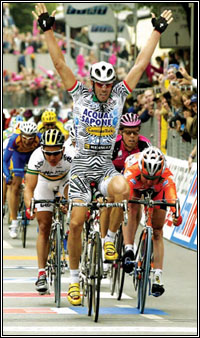 In 2002 Specialized signed a breakthrough contract with the Italian team Acqua e Sapone, who although small in terms of budget had managed to sign one of the sport's biggest names-Mario Cippolini. The flamboyant sprinter had helped Cannondale break into the market in the late 1990s when riding for Saeco, but 2002 proved to be the pinnacle of his career, with a Milan-San Remo win and a world title in Zolder, both of which were ridden on an S-Works E5 frame with a zebra paint job. It mattered little that the deal was struck after the Italian's agent contacted the company because he had seen Festina riders use them at the 2001 Tour de France.

Cipollini's signing earned the brand far more kudos than the years with Festina could ever muster, and the Italian's proactive nature in providing valuable feedback became pivotal in the bike's development. "Mario Cipollini was one who was really critical and gave us a lot of fantastic feedback," Sinyard says.

More teams lined up over the coming seasons, including Gerolsteiner, Quick Step, Astana, Saxo Bank, and-most recently-HTC-Highroad. The wins flowed, too. Quick Step provided wins in Paris-Roubaix in 2008, 2009, and 2012 while Alberto Contador claimed the Tour de France in 2010 to give Sinyard his first win in the world's greatest bike race. However, a month after Contador pulled on the yellow jersey in Paris, his world came crashing down when it was announced that he had tested positive for the drug Clenbuterol during the final week of the race. Suddenly, what should have been one of the company's finest moments in terms of sales and public relations became a nightmare.

In many ways the relationship between Specialized and HTC has overshadowed the Contador affair, mainly because Mark Cavendish has racked up win after win. His feedback, stemming from a dedication to perfection on the bike, has helped Sinyard's top engineers to push the boundaries with their top of the range road bikes, culminating in the Venge, which was unveiled at the start of the 2011 Giro d'Italia. "The sprinters are good because they put really intense stresses on the bike. For us balance and handling are also so important, though-it's not just about lightness and stiffness," says Sinyard. 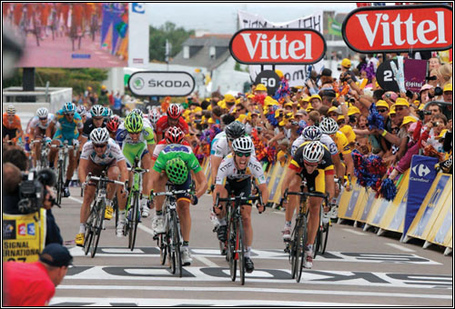 Specialized flew a team of bike engineers to Cavendish's European base, to talk to the rider as he rode and watch his every move as he sprinted. Specialized's attention to detail was a perfect match for Cavendish's desire for the ultimate weapon to guide him to sprinting success. It is a well-known fact how hard Cavendish trains on the bike, but he is also one of the most meticulous riders when it comes to bike position and frame stiffness.

At a press event towards the end of 2011, Cavendish was asked in an open forum what he would miss from his old team HTC-Highroad. His first answer was Specialized bikes, but while the crowd was consumed with laughter at such a cute response, Cavendish's face remained stony. He was not joking.

Such is Specialized's impact on product development that its reach can influence where professional cyclists sign contracts for future years. Specialized's deal for 2012 with Omega Pharma- Quick Step allowed Tony Martin, the 2011 world time trial champion, to keep his SHIV time trial bike. Like the Venge, the SHIV is another of Specialized's flagship models.

Always learning, always developing, and always moving forward, Specialized is now recognized as one of the most powerful manufacturers on the bike scene: a far cry from those days when Sinyard started out-almost broke but extremely ambitious-and a long way from those artisan Italians who inspired him. "In Italy, you get that mystique more than anywhere in the world. Cinelli, De Rosa... their way of working was inspirational to me," Sinyard says.

"We wanted to emulate them-keep it special and bespoke but on a larger scale. I think that's what we've achieved. We made our first road bikes in 1975 and 1976, the LA and the Sequoia, and we've tried to stay true to the same principles all along. I'm very passionate about that artistic element. If you ask me whether there's a point where Specialized could become too big, I'd say it's the point at which we start to neglect that and do things poorly. As long as we're serving riders and helping to make them better, I'm happy for us to carry on growing."

You can download this and three other excerpts from Bike! in PDF form:

Bike! A Tribute to the World's Greatest Racing Bicycles is edited by Daniel Benson and Richard Moore and is published in the UK by Arum Press, RRP £25.00.

And in the Netherlands you can find Bike! translated as Fiets! and published by Librero, RRP €19.95.