Kirsten Wild is back with a vengeance! Giro Rosa stage 1

The Giro Rosa opened with a flat stage - wide, smooth roads, perfect for giving a sprinter the chance to start the race in the maglia rosa. On the start-line, such super-sprinters as two-times road World Champion, Giorgia Bronzini, the Australian star Chloe Hosking, the winner of the last two Giros (and everything else on the road!) Marianne Vos - and only just back on the road after fracturing her shoulder in the Omloop van Borsele, the queen of Dutch sprinting, Kirsten Wild...

Share All sharing options for: Kirsten Wild is back with a vengeance! Giro Rosa stage 1

Highlights video from the race:

There are only two stages in this year's eight-stage race that are designed for the pure sprinters - and this one was always going to end in a bunch sprint. Stage 1, ran along the coast in the southern province of Puglia, from Giovinazzo to Margherita di Savoia, where they finished with two 15km laps, before finishing on the sea-front. It was a beautiful day, hot and fresh, with enthusiastic crowds lining the roads - many of the tifosi wearing just swimsuits - and the towns wreathed in pink, in honour of the race. After a small climb at the start, the going was was flat all the way - with wide roads and winds coming off the sea making it difficult for anyone to escape - especially with the sprint teams controlling the race.

Marianne Vos put down her marker early on in the race, attacking for the 3 seconds of time bonuses that come with each intermediate sprint. She won the first sprint ahead of the Hitec Products UCK pair of first-time Giro riders, Julie Leth and Cecilie Gotaas Johnsen, and the second ahead of Adrie Visser (Boels Dolmans) and Aizhan Zhaparova (RusVelo), with her team, Rabobank-Liv/Giant, racing perfectly.

Once the peloton hit the small finishing laps, problems began. A crash on the first lap took of ORICA-AIS' Sungeun Gu out of the race - and then a spate of punctures on the second lap meant that Giorgia Bronzini and her team were out of contention, with other riders caught up by crashes. The rest of the peloton, however, were more than ready, forming their sprint trains, ready for the sprint.

The finishing straight was perfect for a bunch sprint, and two riders were clearly ahead - Marianne Vos and Kirsten Wild. Wild demonstrated that she was back to her full power, making the win look easy, with Vos in second place and Cipollini-Giordana's Marta Tagliaferro in third.

Wild had told Anne-Marije Rook, in her interview for the Café in May, that she was hoping to make a comeback from her injury at the Giro - it didn't take her very long to achieve that goal! 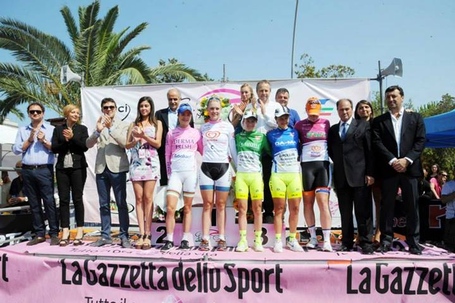 Photo via the Giro Rosa

Vos' intermediate seconds put her into the Maglia Rosa general classification leader's jersey - and if the past two years have taught us anything, it's that once Vos has that jersey, it's hard to take it away from her! Valentine Scandolara (Cipollini) was in the green Climber's Jersey, and Marta Tagliaferro in the blue of Best Italian, while Julie Leth's early effort gave her the white jersey of Best Young Rider.

But all that could change very quickly. Stage 2 is only 99km, four loops of a course that includes two climbs - something that looks fairly gentle, and a short, sharp hill. Will we see the first breakaways? Follow the race twitter and live-tweeting list for all the action as it happens - and talk through the stage in the comments.

And for more views on the stage, check out Amber Pierce's video review and Jessie Maclean's Q&A in my post-race post!

If you understand Dutch, here are some post-race interviews with Wild and Vos:

and one with Vos, with Julie Leth in the background!

And there's an interview with Vos, in English, before the start, by the marvellous team of Cicloweb.it - you can see many more interviews with other riders (in Italian) on their youtube.

More Vos! This is from Rabosport - check out their youtube for interviews with riders, in Dutch

UPDATE! And a Stage 1 video with lots of atmosphere, by film-makers following Specialized-lululemon

There are photos of the Stage on the Giro Rosa facebook and on CorVos. UPDATE! And make sure you read the race report & look at CJ Farquharson's photos from the stage on womenscycling.net. For anything else we see from the stage, and to talk about Stage 2, head to the comments!