Another day, another completely different event.

Number of Kisses: two (although with entire teams on the podium it could take a while) 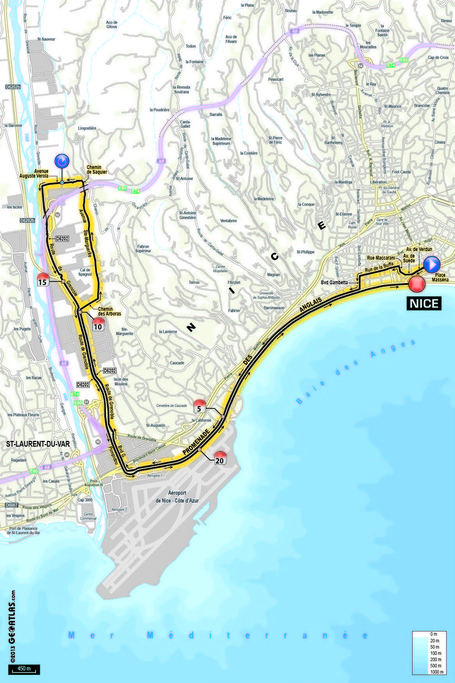 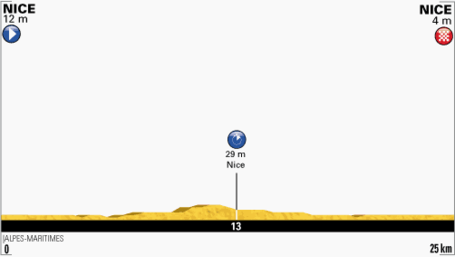 So far this Tour de France has reveled in changing pace, with a flat stage, a faux-flat stage, a faux-climbers' stage and for Tuesday a team time trial. In this case, it's a short, 25km out-and-back route through the streets of Nice, a flat, non-technical powercourse that should favor the traditional time trial powerhouses and not particularly disfavor the sprinters. Only the little climbers should find this a day not to their liking, and even some of them will probably welcome the short, non-threatening day after the twists and turns of Corsica (and a long evening transfer).

Handicapping a TTT isn't my specialty, but I can tell you that it's been two years since the last Tour de France CLM-par-equipes, and Garmin took the honors that day with a squad that has changed a lot but without losing firepower. Out are guys like Farrar, Hushovd, Dean and Zabriskie, in are Dan Martin, Rohan Dennis, Jack Bauer and Andrew Talansky. As usual, Garmin-Sharp are gunning for this stage.

They'll have their hands full, however, as Sky are loaded with strong cronomen like Froome, Boasson Hagen, Porte and Siutsou, but injuries to Ian Stannard and Geraint Thomas have left them a bit dented for the time being. Speaking of dented, there's Tony Martin -- concussed on Saturday, back in the race Sunday, riding with the lead group Monday. Can he garner enough strength to propel Omega Pharma-Quick Step to the top step? He will have plenty of help from a powerful team of Terpstra, Peter Velits, Sylvain Chavanel, Gert Steegmans and Michal Kwiatkowski. And then there's the Power of the Rainbow -- OPQS won the revived World TTT event in Limburg last year, albeit at twice the distance, but with so few chances to defend this title and a team of riders geared for that purpose, they will have their chances.

The three quasi-American teams should finish high up as well. BMC were second two years ago, with Hincapie and Santaromita replaced this time around by van Garderen and Gilbert -- no loss of firepower there. Radioshack-Leopard hold the yellow and have their own history of doing well against the watch, as well as eight strong cronomen (and Andy Schleck). Finally, Belkin (US sponsor, Dutch team) usually do OK. They might struggle a bit to keep up with a few other teams of note: Saxo Tinkoff (Contador, Kreuziger, Roche, Rogers), Movistar (Valverde, Amador, Gutierrez), and maybe Orica-GreenEdge (O'Grady, Meyer, Lancaster).

Omega Pharma-Quick Step. I think pride gets them a few extra meters. But it's gonna be tight.