After yesterday's flat day, Stage 2 of the Giro Rosa could have gone any way. A circuit race starting and finishing in Pontecagnano Faiano, with the riders racing four laps of a 25km course that included a short climb with a 1,200m ascent at up to 15% gradient, it was a battle between the breakaway artists and the sprint teams - with more valuable General Classification time to be won from the intermediate sprint. The stage started with attacks and ended with some of the best bike handling we've seen for a long time - typical Giro excitement!

Wiggle Honda's video from the stage - with footage from the team car:

Rabosport's highlights in Dutch - with slo-motion bike drama from 1:34

With that climb right at the start of the circuit, the race started fast and furious, as Martine Bras, who told us last week that this is the last Giro she'll race, decided to go out with a bang, attacking early. She gained 50 seconds, but was caught by the end of the first lap, and that set the tone for the day - attacks and catches, keeping the peloton on their toes.

On the second lap, it was Rabobank's Annemiek van Vleuten and Wiggle Honda's Giorgia Bronzini who attacked on the climb. Bronzini may be best-known as a sprinter, but she's always strong on these short climbs, and after puncturing in the last 5km of Stage 1, she and her team were all going all out to make the race a sprint. And once the climb was done, Bras attacked again. The peloton weren't having any of it - and at the end of lap two, the bunch was all together - with maglia rosa Marianne Vos leaping off the front to take the 3 second intermediate sprint bonus, ahead of Julie Leth of Hitec in the white jersey of in the Best Young Rider, and fellow Rabobank team-mate Pauline Ferrand-Prévot.

In lap 3 it was Aude Biannic (Michela Fanini) who attacked, and then Valentina Bastianelli - of course! The Vaiano Fondriest rider is known for her suicide attacks at every opportunity - first trying with an ORICA rider and then with Anastasia Chulkova of RusVelo, before being caught as the lap ended.

The last lap was where it got serious. Valentina Scandolara hit the climb hard to secure more GPM points and increase her lead in the Queen of the Mountains competition, and the race was all bunches and catches, going from long thin lines, to small groups, to a big peloton and back again - with Marianne Vos taking her turn on the front of the race, watching the other race favourites, and riders pinging off the front in last-ditch attempts, Inga Cilvinaite was out solo for a while, and when she was caught with 10km to go, her Pasta Zara-Cogeas team-mate and Mexican national champion Ingrid Drexel tried for a couple of kilometres, but it all came down to a bunch sprint.

Marianne Vos was looking strong, starting her sprint early, until her front wheel hit a hole in the road, and it was only thanks to her incredible bike-handling skills that she avoided a nasty top-speed crash. After the race, she said:

"We came into the mass sprint at really high speed…I was on the front and Bronzini came next to me. I thought, ‘I’m going to make myself even smaller and I’m going to bend forward a little bit more’ and then I rode my front wheel into a pothole – which I knew was there – and came out of my pedal because of it. The first thing I thought was, ‘I am about to completely endo at 70 kmh’ so I should be happy that I was able to keep it upright but it’s still a bummer that I got second." 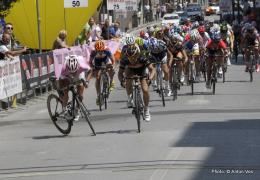 Giorgia Bronzini had been right on her wheel, and took the opportunity to speed past her, winning in a photo-finish - the first time an Italian has won a women's Giro stage since 2009! The pair finished a couple of bike-lengths ahead of Barbara Guarischi in third place, Vos the only non-Italian in the top five.

UPDATE! Here's the race video - Vos' bike handing at 3:10, then interview with Bronzini (including English translation), with Vos, in English, from 4:35, and with Guarischi, also translated:

Bronzini celebrated her win with a post-race beer....

and an enthusiastic prosecco podium celebration

Tomorrow, however, the competition for General Classification will really heat up. Last week, both Annemiek van Vleuten and Rossella Ratto told us they had their eyes on Stage 3, and while the profile doesn't look too hard, the Giro is known for being deceptive that way. Here's a video of the finish the last time the Giro used this stage in 2009, when Noemi Cantele won from a small group, with Bronzini second and Ina-Yoko Teutenberg third. They get to the final kilometre at 4:02, and the steep cobbled climb to the finish at 05:02 - but watch on to compare how they tackle the climb compared to Judith Arndt, Emma Pooley and Claudia Häusler, the climbers in the chasing group. What will happen this year? Follow the stage as it happens on twitter, and talk about it in the comments below.

UPDATE! Read my Q&A with Amanda Spratt about the stage

For photos of the stage, look at the Giro Rosa's facebook and CorVos - and I'll edit in more photos, race reports and videos as I find them. And for an excellent fan's-eye view of the race, head to Velofocus' Giro Rosa page.

There are race reports from ORICA-AIS and Rabobank (in Dutch or via google translate).

UPDATE! Race report and photos by CJ Farquharson on womenscycling.net and Jen See has written a race report for Bicycling.com here

As always, check out my twitter list for riders' views of the stage - and anything you find, add it to the comments!

A word of advice for people watching the videos and looking at the photos who might be confused trying to identify riders - two of the teams are in special kits for the race! MCipollini-Giordana have kept their trademark fluorescence, but swapped designs:

while Specialized-lululemon have left their usual black-and-white optical-illusion kit at home, and are wearing black with pink flowers - have a look at the details of it in this video, where it's modelled by Ellen van Dijk and Trixi Worrack: