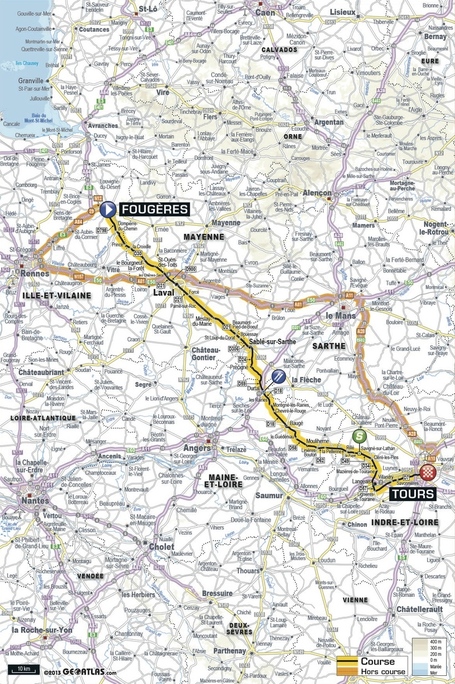 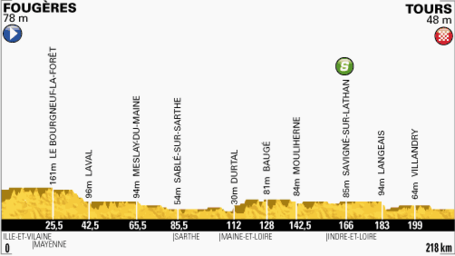 The Tour stays in sentimental mode for a flat stage into Tours, center of the majestic Loire Valley and home to one of cycling's almost-monuments, the Paris-Tours classic raced in late September/early October. Paris-Tours is perhaps the one true sprinters' classic, except that it's actually a very hard day in the saddle, with capricious little hills, roads and weather conditions. Meaning, it's a sprinters' race when the racers make it one, but that's hardly a given.

Progress, however, has altered Paris-Tours the same way it did with Paris-Roubaix, and its iconic finish on the wide Avenue de Grammont, formerly a wild 2.6km, is now only 800 meters, thanks to construction of a tramway. Apparently the people of Tours chose the other 364 days over raceday. What-ever.

Anyway, Stage 12 of the Tour makes a slight nod to this great race, and the glorious history of French cycling (it IS glorious, you know) with this pass by the Ave de Grammont. The actual Stage 12 finish is beyond the Ave and down by the river, in an area with few roads, meaning either a park or an industrial site. I guess we'll find out tomorrow. But it won't be the finish line that the helicopters will be buzzing all day; it'll be the Châteaux of the Loire Valley, the country homes of the old French aristocracy, whose demise we will be celebrating on Sunday. Got anything to do with cycling? Not really unless you HEY LOOK A SHINY OBJECT!!! Which is the Tour's way of saying: we need to get to Lyon in three days, we need to break off 220km chunks of the route, and everyone on Earth knows it's a flat, dull stage.

Mark Cavendish. Can there be any doubting the magical power of human urine, which has transformed Cav into a sympathetic figure? He's also very fast, and while Kittel's win yesterday may herald the arrival, at last, of someone fast enough to take on Cav directly, it'll be the Manxman with all the motivation, and a very strong squad, on his side.

Bonus! Wine of the Day!

Courtesy of Cafe member Amybc, whose WineBookGirl site has been pairing stages of the Tour with local specialties all along the route. For stage 12, Amybc suggests a nice Domaine les Roche 2003 Chinon.