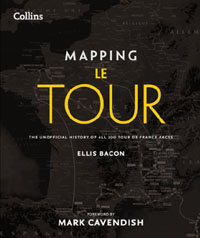 Title: Mapping Le Tour - The Unofficial History of All 100 Tour de France Races
Author: Ellis Bacon (with a foreword by Mark Cavendish)
Publisher: HarperCollins
Year: 2013
Pages: 336
Order: HarperCollins
What it is: Atlas-scale maps tracing the routes of 100 Tours de France, with brief text descriptions of each race.
Strengths: Bacon takes a familiar story - the history of the Tour - and finds a fresh and original way to present it.
Weaknesses: Brevity of the text.

...In that Empire, the Art of Cartography attained such Perfection that the map of a single Province occupied the entirety of a City, and the map of the Empire, the entirety of a Province. In time, those Unconscionable Maps no longer satisfied, and the Cartographers Guilds struck a Map of the Empire whose size was that of the Empire, and which coincided point for point with it. The following Generations, who were not so fond of the Study of Cartography as their Forebears had been, saw that that vast Map was Useless, and not without some Pitilessness was it, that they delivered it up to the Inclemencies of Sun and Winters. In the Deserts of the West, still today, there are Tattered Ruins of that Map, inhabited by Animals and Beggars; in all the Land there is no other Relic of the Disciplines of Geography.

One of the many myths and legends of the Tour de France known by most is that, before Henri Desgrange invented the Tour in 1903, French people hadn't got a clue what their country looked like but, through the Tour maps produced in L'Auto, they quickly learned the shape drawn by the contours of their country's border. If you believe one of the other well known myths about the Tour, maps are also at the heart of the creation of L'Auto itself, for military maps were among the secrets Alfred Dreyfus was accused of passing to the Germans

Maps are at the heart of the Tour. The daily route maps help the riders decide what stages best suit their skills, or where on a stage is best to launch an attack. They provide guidance to fans as to whether the day will be a snooze-fest for the sprint trains, a day for the breakaways or a day of fun in the high hills. We read the Tour in its maps.

And yet, curiously, most Tour books omit maps. On those rare occasions when you are offered one it is a thumbnail in a corner of the page with artistically curved lines joining up stage ends. Ellis Bacon's Mapping Le Tour is, to the best of my knowledge, the first English-language Tour history to put cartography at the heart of the Tour's history. 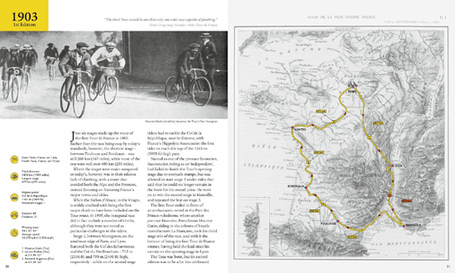 Mapping Le Tour is, in essence, one hundred atlas-scale maps of France with the route of each Tour drawn on them. Each edition of the Tour is served up over two pages, the first offering words, key figures (distance, speed etc) and a picture, the second features the map. 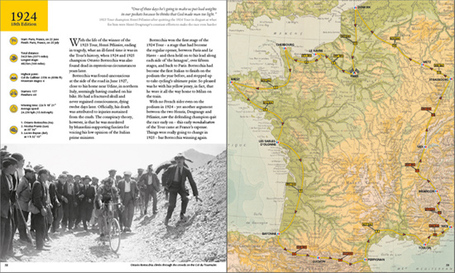 In a year that has seen an abundance of new Tour books hitting the bookshop shelves - a mere warm-up act for the encore of Le Tour en Angleterre due next year - Mapping Le Tour is, without the shadow of a doubt, my favourite.

Fact is, I love maps. Paul Fournel, in one of his essays, has said that "road maps are for me dream machines. I like to read them as if they're adventure stories." That's something I can understand. Even scaling down from detailed road maps to the atlas-scale maps used in Mapping Le Tour, there are still stories aplenty to be read in these maps. For instance, it really takes maps to show how stable early Tour routes were, the race more or less following the same route around the edge of France each year, with the only tweaks coming in where stages started and ended and how long they were. Compare that to today's route where the only consistent features of the Tour are Paris, the Pyrénées and the Alps, with the rest of the race etch-a-sketching a spider scrawl around one corner of the hexagone. 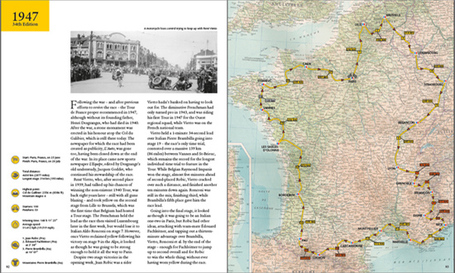 An obvious criticism of the format is that the maps used are too small. But what is the right scale to use? You could go the route of Borges' Unconscionable Maps and still leave some unsatisfied by the level of detail on offer. And the larger the maps becomes the harder it becomes to see the overall route of the race and the way that has evolved year to year. And that, to me, seems to the story at the heart of Mapping Le Tour, the big picture of the evolution of the race route. 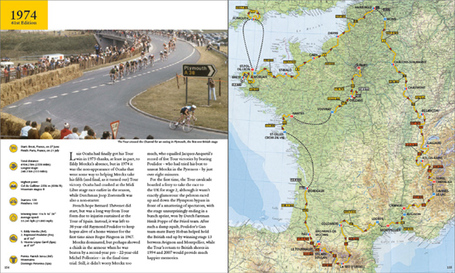 For those who want more detail, though, Bacon does single out some of the Tour's most popular places - the Alpe and the Ventoux, Normandy and Lac da Vassiviére etc - and provide double-page spreads on them, as well as looking at the route of the 2013 Tour on a stage-by-stage basis. (Should the book go to a next edition, something I would like to see in it would be all the individual routes of each Tour overlaid one on another, so as to highlight those pockets of France as yet unvisited by the Tour.) 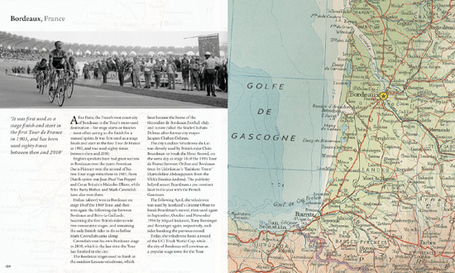 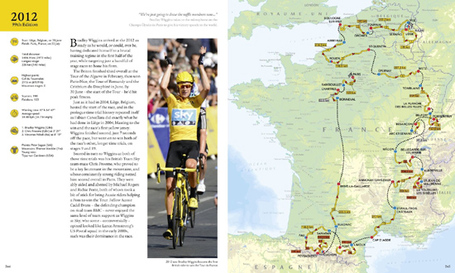 The idea of a book of maps may seem somewhat geeky, something for the specialist, but Mapping Le Tour does, I think, offer something for everyone in a fresh and original format. It's a book that I hope is going to have a very long shelf life.