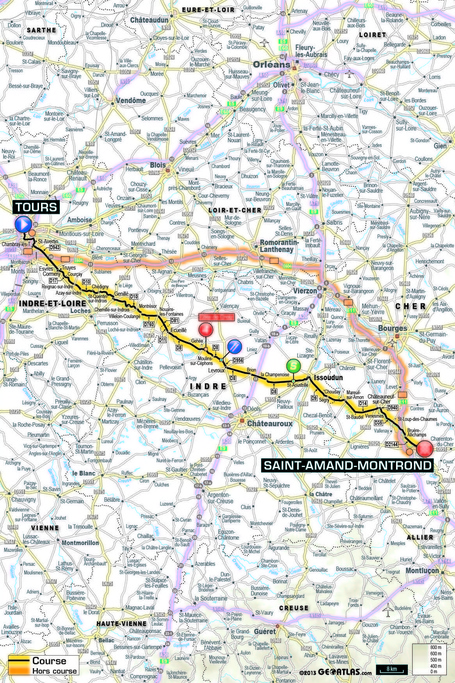 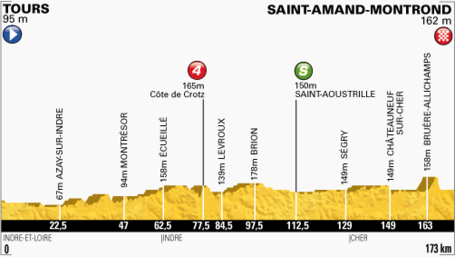 I know a lot of people think these mid-week stages are boring, but Thursday we had the Loire Valley and Friday? Le Départment du Cher. 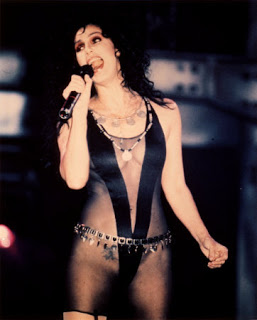 Yep, this is gonna be epic.

Oh, and another day, another obscure French saint. Did France get computers in the 12th century and someone constructed a Random Saint Generator app? If they did, WIN:

Saint Amand is the patron saint of all who produce beer: brewers, innkeepers and bartenders (and presumably also hopgrowers). He is also the patron of vine growers, vintners and merchants, and of Boy Scouts.

You had me at beer. Probably don't want to ask too many questions about the Boy Scout thing. Either way, epic.

As to the action on the road, could Mark Cavendish's week get any worse? He loses, he becomes Dutch public enemy #1, he gets doused in urine, a Dutch criterium uninvites him from its post-Tour fe$tivities, and he loses again. Then, just to rub it in a bit, the Tour throws in a seemingly nasty unrated climb 8km from the finish. It's hard to say what that thing is; on the profile it looks like a ramp that the peloton can sail off of and cross the line in mid-air. Probably it's a minor thing, but the Cannondale train hasn't shown much mercy, and tomorrow should be no exception.

If it does come down to a full-field sprint, the story will be all about Kittel vs Cav, the unexpected rivalry. Granted, it took a macabre turn with the Cav-on-Veelers incident Tuesday, and the emotional swing has heavily favored Kittel's Argos-Shimano team. But getting down to brass taxes, what we are seeing is a guy who can sprint as fast as the Manx Missile. Sharknado/Dolph Lundgren is the latest member of a select group, guys who can take on Cav this way and win. Most of the challengers so far have been of the Greipel (occasionally successful) or Farrar (temporarily successful) variety. Cav has outlasted and outkicked everyone since about 2007. Is Kittel about to change all that? Let's not get ahead of ourselves on calling him the new king, but the suggestion of a change is certainly in the air.

Another possible outcome is that, to save face, Omega Pharma just take the foot off the gas and beg the other sprint teams to let the break win. It hasn't happened much, or at all really. So why not?

Peter Sagan. How has this not happened yet? Yep, I am an idiot, he won stage 7. To punish myself, I will now predict that Juan Antonio Flecha will win the bunch sprint.

Bonus! Wine of the Stage!

Another Loire red. This time, the more obscure Pineau d'Aunis. This is a perfect summertime, rather gulpable light red wine. And after yesterday's sprint finish, gulpable was necessary.

Trivia: A favorite of Henry Plantagenet, the English king had Pineau d'Aunis wine first brought to England in 1246.