Le Tour Stage 14 preview: What do you want to do next?

Share All sharing options for: Le Tour Stage 14 preview: What do you want to do next? 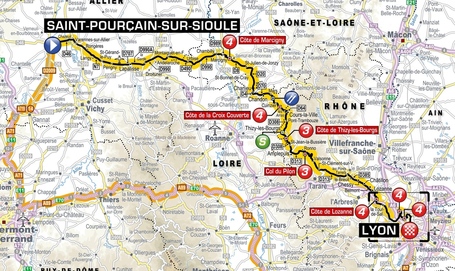 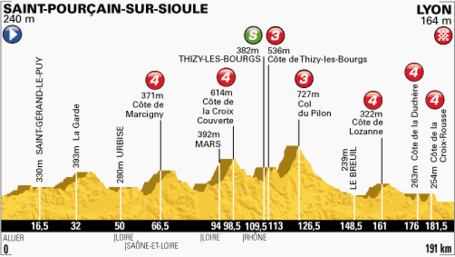 None of the KOMs look daunting, this is a hilly rather than mountainous day. The challenge doesn't so much lie in the terrain here, if there is a will to make it hard the terrain is inviting enough, but the big question is the ambitions of the teams . So there are a few ways this may play out.

Version 1: An obvious breakaway stage. The french riders have little to show for their efforts in the TdF so far and the profile today is perfectly laid out for a break to make it to the end. It's too hilly for the big sprint units to waste the effort to keep it together and the GC teams will want to waste as little energy as possible with the Ventoux looming on the horizon on the next stage. Expect a decent size break of non-GC-threats to win the stage by 5-10 minutes.

Version 2: An obvious stage for Cannondale to pile on the pressure to get Sagan another win. Last time worked like a charm and since he is having some troubles to pick up wins elsewhere with such a stacked field it should be totally worth their while. They looked surprisingly passive today when the wind-action picked up (although their key guys where in the right place in the right time), I think they were saving bullets for today. They may even find one or two allies to help them keep the breakaway in check, who knows?

Version 3: It may be the day before Ventoux but there is blood in the water. Sky is weakened at the same time as everyone knows Froome is two notches above everyone else on the mountaintop finishes. Saxo went batshit on St 13 today but who knows if their top guys aren't up for a repeat performance if the chance arises? Some teams hurt a little in the crosswinds too and may want in on the tasty chaos-action that has served this TdF so well. There may be GC positions in play for those willing to chance it.

Peter Sagan: Either scenario you go for it's hard to overlook him. He won't go in the early break but barring the scenario where the peloton are happy to take a breather and let a break of no hopers win the day he is a massive favorite.