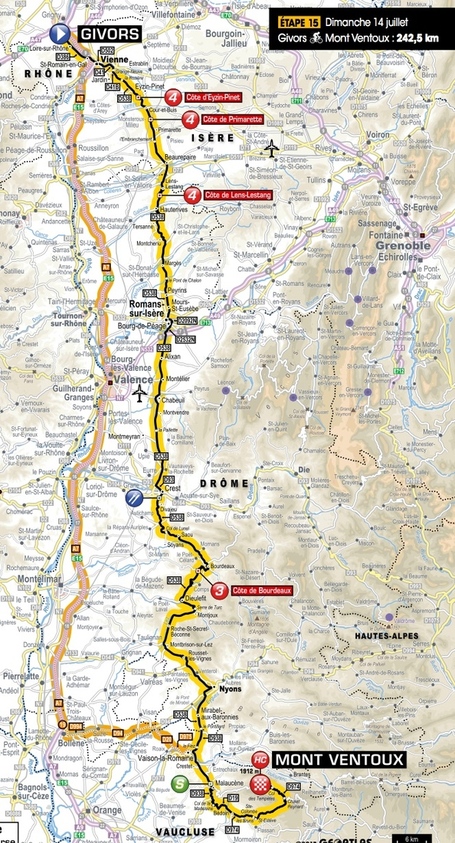 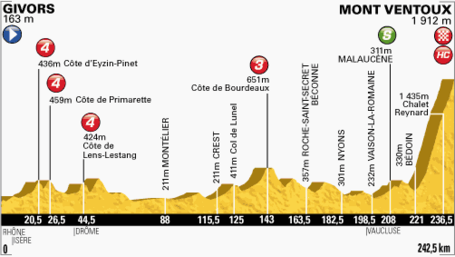 For the full background on the magic of Mont Ventoux start off by reading Will's full story on the mountain and what makes it such a special element in the Tour de France before reading this. It's well worth the time. Here, let's dive straight into the racing elements to the stage.

After a roller-coaster week where we started out after Ax3-Domaines generally fearing that the TdF was over, having seen the dominance of Chris Froome and Richie Porte. It took less than 24 hours for that idea to be blown to smithereens after the chaotic second Pyrénée stage and after the stage 13 ambush by Saxo-Tinkoff we are looking at a race in the last week that is, if not wide open, then at least not yet decided. Sky are facing a barrage of attacks and it remains to be seen if Froome & Co can withstand the assault over four major mountainstages beginning with Mont Ventoux?

The Ventoux stage is perhaps the most straightforward of the remaining challenges as the riders face a long fairly simple approach to the final climb of the Giant of Provence. Three Cat 4 climbs in the first 50 kms should prove a brutal battleground as most every Frenchman in the race scrambles to get in the early breakaway. With the race taking place on July 14, Bastille Day, the French National-day the significance of winning as a Frenchman should not be under-estimated.

Winning at Mont Ventoux, this is something that stays forever. -Pierre Rolland

It's become increasingly rare to actually see it happen in the last years as the level of competition has gone up at the Tour and in the World Tour generally. There are no gifts in modern cycling and very little sentimentality about these things . Winning on Ventoux should prove a tough challenge as well with so much at stake in the General Classification and given how hard it has been for breakaway to get any liberty at all in the race so far this year. Perhaps the best bets for it to happen is Polkadot contender Pierre Rolland who, with a win on Alpe d'Huez in 2011, has proven he can win against the best climbers in the world and Thibaut Pinot. Pinot who was the great French hope this year has had a shocker of a race so far and has been looking totally demoralized. Struggling on the descents, the uncomplicated Ventoux stage may perhaps offer the best opportunity to salvage his race. Look for him to try and get in the early break as he probably lacks the confidence to start off the climb with the big favorites.

For the GC battle no one wants to make predictions anymore do they for fear of looking like a prat when the race goes bananas once again but I'm going to chance it anyway. I'm assuming the race among the contenders remains fairly calm until the race reaches the foot of Ventoux. The race does cross through the long windy approach and the possibility for attacks is there of course but the long stage and the respect for the brutality of the finale should put a damper on events until we reach the mountain. That is what common sense dictates anyway....

Once on Ventoux the story will be all about what Sky can do and what Froome can do. After the last few days everyone will be looking to exploit any chink in their, by now, fairly tattered armor. Much will be decided by whether they can regain their ability to set the pace on the climb as we have seen them do in the last two seasons to deter the opposition and set up Wiggins/Froome for the final kill in the last kilometers. Froome could perhaps on current form hold his own and maybe even take time from the opponents on his own but Sky will be looking for Porte & Co to re-emerge and do the job everyone has been assuming they would. If they don't it may signal the start of a brutal week for the team as the following mountain stages will pose even greater challenges.

Chris Froome. While Sky have shown itself vulnerable as a team there have actually been very few signs that Froome is any less dominant than he was on Ax3-Domaine. Be it helped by the team or by himself he looks likely to take even more time on his nearest competitors. Dark horse contender: Andy Schleck. Pinot is probably not the only one that has noted the lack of decents on this stage. Look for Andy to try and underline his comeback on this climb where he has done well in the past.