The Tour tees up its big finish with a semi-traditional hilly stage to BaseCamp Gap. 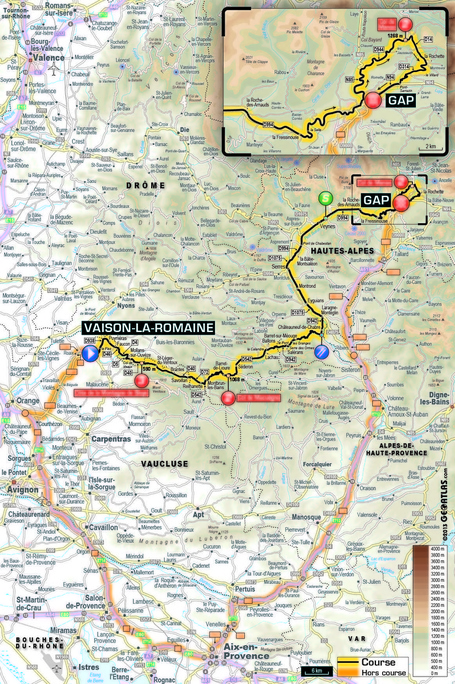 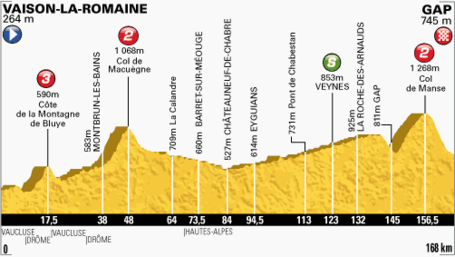 Should we toss in the green jersey too? Nah... Sagan has already tucked that away. But if he hadn't, this would be one of those days to make the Cav Brigade cry.

Has Gap really only hosted 21 stage finishes? It seems like an annual pilgrimage, and if memory serves me, it also seems like they go over the Col de Manse each time. They did two years ago, when Thor Hushovd beat Edvald Boasson Hagen to the line on a Norwegian intramural breakaway (and a very memorable stage). In 2010 they came round via the Col de Noyer, when Sergio Paulinho outkicked Vasil Kiryienka for the win in another duel. Prior to that you have to go back to 2006, and then the race reached the Capital of the Southern Alps vial the Col de la Sentinelle, and Pierrick Fedrigo won by a few seconds over Salvatore Commesso and the main field. Oh well, I suppose Gap isn't quite the Pau of the Alps, but it's close.

You can pretty much generalize about the stages into Gap being breakaway events. There simply is no reason for them not to be, most of the time, and this year is no different. Who should chase, on the eve of the time trial and three brutal mountain stages? Not the sprint teams, whose riders won't make it in time, except for Sagan, who also needn't spend his energy on another stage, since it won't be easy to control and he will have fattened up his lead in the Points Comp at the intermediate. Not the GC teams, who have nothing to gain from a few small climbs and a descent into town. Not the KOM teams, because there is no such thing (though of course Pierre Rolland will be up the road, along perhaps with Mikel Nieve, if his performance yesterday has whetted his appetite at all for polka dots).

So anyway, this race will result in a successful breakaway. That narrows down the list of possible winners to about 140 guys, including anyone who pays taxes in France.

I'm going with Arthur Vichot. Thomas Voeckler is too obvious, and was seen trying his luck yesterday. All the other French stage hopefuls will be parked on his wheel. When he goes, they go. When Vichot goes...?